Harrison trains a new client at his gym. Beverly contends with competition in the workplace. Ivy has a violent confrontation at a rally.[1]

Election Night 2016 is being reported by Beverly Hope, interrupted by professional rival Serena Belinda. Dr. Vincent, the Mayfair-Richards, Winter and her friends, Serena, Beverly, her cameraman R.J., and the Wiltons are all in line at the polls. Although promising Ivy that she wouldn't do a protest vote, Ally votes for Jill Stein. Harrison votes for Gary Johnson, Serena votes for Trump; and Ivy, Beverly, R.J., Dr. Vincent, and Winter and her friends all vote for Clinton. Meadow, not liking any of candidates, writes-in a vote for Oprah Winfrey. Kai carries a bleeding Gary Longstreet to the polling booth, both voting for Trump, and as Gary emerges from his booth, he holds up his freshly severed stump of an arm in exclamation.

Harrison returns home to a despondent Meadow, who has received an eviction notice. They argue over finances and whose fault the foreclosure is. To distract him, Meadow unsuccessfully attempts to seduce him.

Later, Vinny, berates him at work for not up-selling sessions to Kai. Kai objects to hard-sell tactics, and Harrison reveals his financial dilemma to Kai, who inspires him and draws him in. During another humiliating clean-up, Kai draws the happy face again. Kai subtly convinces and motivates Harrison to stand up to Vinny. Harrison pins Vinny on the bench press, crushing his throat with the barbell. After he starts gasping to breathe again, Harrison finishes him off with a dumbbell to the head. Kai helps to cover up the murder and its electronic trail. Kai has been grooming Harrison for indoctrination, and they dispose of the body by dismembering it in their motel bathtub. Meadow comes home to the hotel room to find them in the act. Without significant surprise at what they're doing, Harrison introduces Kai as "someone to believe in."

Beverly reports on Vinny's discovered, but unidentified, headless and handless corpse in a landfill in December, while Serena gets to report on fluff pieces. Kai replays Beverly's report wondering about a mentioned return from an absence. Internet research finds that Beverly attacked a teenager after being interrupted throughout several broadcasts by bystanders interjecting "grab her by the pussy." She spends a month in anger management treatment.

In the news studio, Beverly interrupts Bob and Serena in an intimate moment, and Bob urges Beverly to compromise her stories to provide more air time for Serena. Later, Beverly takes out her aggression by slashing the tires on Bob's car. Kai approaches her and offers tips for the tires and takes her out for coffee at the Butchery. He outlines his plan for world domination, and they discuss her rage that inspires him. She notes that his campaign for city council is premature, as there are no open seats. He invites her to visit his campaign office in a few days.

Serena reports on a pet adoption event in a park. While on camera, she and Cole, her cameraman, are viciously butchered by Meadow, Kai, and Harrison, in clown costumes designed by Meadow.

Later, at his house, Beverly accuses Kai of the violence, which he admits, saying that he did it for her. She declares her allegiance to him in shared equal power. Beverly scoops the story when Vinny's head is located.

The day before the election, Ivy tries to convince Ally to come to a rally. Ally doubts Trump has a chance and dismisses the idea that Clinton will lose. Separated by a barricade, Ivy and Gary argue at the rally, ending when Gary grabs her crotch. Winter intercedes and Gary drives away. Together, Winter and Ivy ditch the rally and eat at The Butchery. Ivy is upset that she didn't defend herself, and they discuss the politics of misogyny. That night, Gary closes up the grocery excited about the next day's election. Winter distracts him while Ivy zaps him with a stun gun from behind.

Handcuffed and bound, Gary swears at the women, who intend to keep him until after the election. Winter comes home, and Kai questions the blood on her. He asks how it felt to hurt someone as she did. She says that it felt great.

Later, Kai tracks down Gary, who pleads with him for release so that he can vote. Kai riles Gary up, but provides only a coarse saw. Gary saws through his arm so that he can cast his vote, with Kai watching in pleasure.

Personal trainer and owner of the Funtime Fitness, a local gym, he used to harass and humiliate Harrison with his biased homophobia, forcing his employee into degrading tasks. He found his premature death when Harrison fought back, fueled by Kai's persuasive speeches. Dismembered and thrown into a landfill in the Hoyt area, the pieces of his corpse were found weeks later. 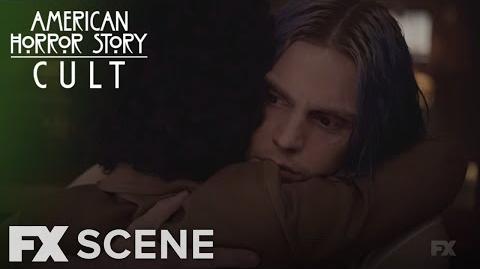