Anna Leigh Leighton is the Supreme preceding Fiona Goode. She is a character in Coven portrayed by Christine Ebersole.

In 1940, during the reign of Mimi DeLongpre, Anna Leigh Leighton inherited the Supremacy at the age of 29. It was in Leighton's reign when she signed a truce with Marie Laveau, an agreement that put decades of peace among the Salem descendants and voodoo practitioners residing in New Orleans.

In 1971, after revealing to Fiona how she realized that her growing powers were a sign of her rightful inheritance to the Supremacy, both had a heated argument. As Anna Leigh told her protegé that she was not yet ready to claim the Supremacy, Fiona mocked her deteriorating health. Anna Leigh, seeing Fiona's lust for power, swore that she would never let her take the throne. Fiona responded by slitting her throat.[1]

When Fiona was questioned by the Council about Anna Leigh's disappearance, Fiona lied and told the Council that the last time she saw Anna Leigh, the Supreme was carrying a fine bottle of wine, taking it as a gesture of good-will to an unknown person. The Council members thought then that Marie Laveau had killed the Supreme and Fiona was selected as Anna Leigh's successor, following the deceased Supreme's will.[2]

Anna Leigh Leighton was sweet, proper, refined, and classically old-fashioned, and had a majestic air to her presence and speech. Despite this, she was shown to have quite a temper when provoked. She was a powerful witch, and was a highly able Supreme during her time, considering she signed a truce with Marie Laveau and subsequently brought peace (despite still harboring hostilities) between the two groups for several decades.

Anna Leigh was a blonde, buxom sexagenarian. Though plagued with several health problems in her later years, she was still quite beautiful. She dressed in old-fashioned, regal attire and styled her blonde hair in an Edwardian-style bun. She was also quite tall standing at 5'10.

Anna Leigh was a very powerful natural born witch who is shown to have mastered all of the Seven Wonders.

Anna Leigh with her protégé and successor Fiona Goode 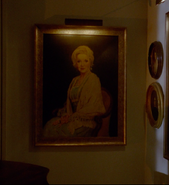