Austin Sommers is a seasonal resident of Provincetown, where he found the muse for his writing career. He is a character in Double Feature portrayed by Evan Peters.

Two years prior to the start of the season, Austin worked amongst a group of drag queens. One evening while in Provincetown, he meets Belle Noir. Unbeknownst to him, she ate the man who was going to produce his play. After spending some of the evening together, she introduces him to The Muse.

Ursula stated that Austin won numerous Tony Awards, implying that he may have history within the Broadway career path.[1]

During the first few episodes of the season, he is shown to be somewhat childish, reckless and even humorous at inappropriate times. He doesn't seem to show any form of respect, even while out in public, since he tends to mock other individuals, often resulting in them getting angry at him. Austin especially acts childish whenever he's around Harry, often making out-of-the-blue remarks and never once being fazed whenever he gets furious at him. Other than this tiresome persona of his, he is shown to have a more dark and manipulative side, when he predicts that Harry will have a withdrawal from the pills that he had given him, in order to "help out" with his writer's block.

His humor also tends to surround the concept of sex and murder, since it can switch between the two. Whenever he's physically hungry, he even uses childish terms such as 'Hungies' during his interactions with Belle Noir, despite the situation often including the duo murdering someone. Austin is also very boisterous and this is very apparent whenever he's with Harry. His humor drastically changes, when he thinks of sex and even speaks in a sensually breathy tone to Harry. It could be possible that he might have a secret interest in him, seeing as to how they were both writers.

To Harry: "I say who cares? You chose this life!" 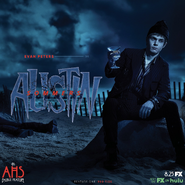