View source
watch 01:32
She-Hulk Trailer Dropped - The Loop
Do you like this video?
Play Sound
This article is about the episode. For the entity, see Ba'al.

"BA'AL" is the fifth episode of American Horror Stories. It scheduled for streaming release on Thursday August 05, 2021 on FX on Hulu.

A wife does the unthinkable for a chance at a successful pregnancy.[2]

A couple, Liv and Matt, hears bad news from Dr Mounds. They've had five IVF procedures over two years, but the doctor now thinks they need to pursue other options. She is intent on trying again, and will start a new cycle in 8 weeks. The receptionist presents her with an ancient fertility totem that has been in her family for generations, which she instructs to put underneath the conception bed. One stormy night, she places the totem under their bed. As they make love, the totem falls beneath them.

16 months later, Liv bounces her fussy baby boy: Aaron. Her housekeeper, Norma, tries to give her some parenting advice. Liv is frustrated that she can't do anything to appease her son, and feels like the baby doesn't seem to recognize her as his mother. Norma assures her it is only a matter of time.

Wandering the house later, Liv notices the baby monitor on the fritz. She remembers to retrieve the totem from under the bed, but it has changed and has more defined features. She places it in a shoebox in the closet. She is surprised by Matt, covered in monster makeup and fresh off shooting a scene for NCIS, in the hall. He says that Norma called him worried, and he came back for a brief break to check on her. Liv tells him that all that she wanted to be was a mother, and now she can't seem to do a good job of it. Matt insists that what she's feeling is entirely normal but he suggests seeing a professional. She doesn't want to attend therapy, but he says that his agent gave him the card for a medical doctor specializing in post-partum depression treatment. That night, Liv wakes to sounds from the baby monitor. She looks up to see a horned and winged figure standing over her child. She runs, monitor display in hand, into the baby's room and finds nothing. The monitor shows the figure standing next to her.

During the day, Liv describes her experience to Dr Berger. Liv fears that her son hates her, as he won't respond to her. Berger thinks the baby is detecting Liv's stress and reacting, and suggests a night nurse for a few weeks. Liv declines, but agrees to pursuing other strategies. Liv plays with Aaron during his detox bath, trying to stay upbeat. She places him in the crib, and he stays calm. Matt returns home from an acting job briefly and notices the change in Liv. Confident that she can take care of Aaron's sudden crying, she goes into his room and finds the totem statue, now more detailed and resembling the winged and horned figure from the monitor. Liv angrily confronts Norma, demanding to know why she put the totem in the crib with Aaron. Norma swears she did not, and realizing that Liv has kept the diabolical figure quits the job immediately.

Liv intends to hide the statue even more deeply in the house, and hears a low growling from the basement. Downstairs, she discovers claw marks where something has torn into the wall and the air conditioning ductwork. The duct suddenly falls, causing Liv to scrape her arm on an exposed nail.

Matt thinks a raccoon must have been in the basement, but wonders — after Liv has told him about the totem's appearance — where she got it. She claims she found it at a new age store and that it's a good luck talisman. He is creeped out by it, but also thinks she needs more sleep to get better. He won't be able to work on the show if he is taking care of her at night, and wants her to try to take better care of herself while he is away.

One night, Liv searches the internet for Sumerian fertility gods and finds images of Ba'al. Realizing Ba'al is demonic in origin, she panics when she sees the full sized Ba'al on the monitor. She finds the room itself empty except for Aaron, but hears a whispered noise which she records. She plays back a recording to Matt, and insists that she hears the words "I want him".

Matt brings Dr Berger in for a house call, and the doctor also listens to the recording. Berger insists that Liv is finding patterns in the static that aren't there because of stress and sleep deprivation. She prescribes an anti-depressant to Liv, which Liv reluctantly begins to take.

At a dinner party with some of his college friends, Matt is congratulated for breaking into the business. One of them spots a Ouija board and suggests they give it a try. Matt is reluctant, but Liv says it is OK. They begin a seance, and the planchette moves to spell out "Jack Meoff" as the speaker. They laugh about it, but try again and the board spells "He is mine". Liv begins to panic and throws the board into the fire. Matt is upset that Liv has embarrassed him in front of his friends, which has brought him to a breaking point. He demands that she figure it out. Liv goes in and cradles an upset Aaron, and she sees Ba'al outside the window in the rain.

In the fertility clinic parking garage, Liv confronts Bernadette (the receptionist). Bernadette is a Wiccan and has a lot of lore at her home, but insists that Ba'al is supposed to be benevolent. She gives Liv a book with a banishing ritual and an athame to assist her, which Liv performs that night. Ba'al continues to whisper "He is mine". Waving the dagger in defense, she stabs Matt (who she did not see or hear enter the room) in the shoulder.

Two weeks later, Matt (with his arm in a sling) visits Liv in a mental health facility. He forgives her and says that Aaron is doing well. She wants to stay until Dr Berger says it is safe and Aaron is not in danger. He leaves and enters a parking garage where Bernadette is waiting in a car. Matt and Bernadette have been conspiring to gaslight Liv into indefinite commitment to the sanitarium. Bernadette is not truly a Wiccan, and the two actors have truly committed to their parts. The remaining college friends were also in on the act. Stan added special effects to the baby monitor, the damage to the basement, and electronics to supply the devilish audio. Emma carved the figurines and her husband wore the Ba'al suit. Matt himself switched out the anti-depressants for a psychoactive cocktail and intentionally lowered his sperm count to reduce his fertility (not wanting to have a child in the first place). They filmed the entire process and intend to make money off of gaslighting Liv.

Matt leaves his partying friends to change Aaron's diaper, and the lights begin to flicker as fog rolls in. Ba'al has come to claim them and executes each in turn. Matt ends up in prison for his crimes after his confession. Liv comes to visit him, and he tells her that he did it because he never wanted kids. Eventually, he didn't want her either. He insists, though, that the demon killed his friends. Liv begins to leave, not wanting to listen to talk of demons from him. He begs for money for his defense, but Liv will not help him. She walks away saying that Aaron has no father.

At home, Liv puts Aaron to bed. Ba'al arrives, demanding to be released. Bernadette believed the banishing spell was fake; when Liv tried to use it in the hospital (with her own blood to make the sigil), she discovered it was a true summoning and binding spell. Liv set the bound Ba'al upon Matt's friends, and will release him under one condition: he seeds her with another baby.

Dr. Mounds is a character in American Horror Stories portrayed by Michael B. Silver.

Bernadette is a character in American Horror Stories portrayed by Virginia Gardner.

Emma is a character in American Horror Stories portrayed by Kimberley Drummond.

Rory is a character in American Horror Stories portrayed by Chad James Buchanan.

Stan is a character in American Horror Stories portrayed by Jake Choi.

Norma is a character in American Horror Stories portrayed by Misha Gonz-Cirkl.

"Are you prepared for the consequences?" 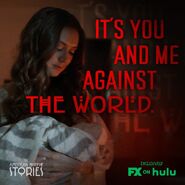 "This one's for all the moms."