Belle Noir (legal name Sarah Cunningham) is a best-selling author of erotica novels and seasonal resident of Provincetown. She is a character in Double Feature portrayed by Frances Conroy. Belle Noir has a penchant for fresh blood and younger men.

Five years ago, Sarah Cunningham or "Belle Noir", self-publishes her work and is not well-known nor particularly successful, despite her talent. Her most recent work includes Martha's Cherry Tree, a risqué take on the marriage of George and Martha Washington. Seemingly, Belle uses her writing as an outlet for her pain and anger. This pain mostly stems from her husband Ray Cunningham. Seemingly, writing is Belle's 'dream', and she has only started to pursue it in her and her husband's retirement. At this point, Belle and Ray have been married for forty years but their relationship has deteriorated and become sexless. He too is emotionally abusive and adulterous.

Belle comes to Provincetown as a part of her book tour. After a reading of her latest book, Belle tries to mollify her husband's resentment by encouraging they share an evening at The Muse. After rejection, Belle meets Mickey at the Muse. Desperate to break out of her sad life, she takes methamphetamine and dances freely. Looking for a further high, Belle is introduced to The Chemist by Mickey. The Chemist, a fan of Belle's work, offers her the Black Pill in exchange for being one of her test subjects. After taking the pill, Belle spends an entire evening and night writing. Astoundingly, she completes an entire "beautiful" book by the morning. Ray returns. He mocks her and gloats about his adultery. Belle cracks. She slashes Ray's throat in a rage and pounces on his neck - drinking his blood. After telling The Chemist what happened, Belle decided to commit herself to the Black Pill and the life of evil it entails. Roughly three years later, Belle decides to pursue a new look and buys a new wardrobe of vintage clothes from Lark.[1]

Belle later meets Austin Sommers, who is working as a drag queen. Belle recognises Austin's true talent as a play-write and songwriter. She also experiences some guilt, as she murdered Austin's casting-director inadvertently forcing him to work as a drag queen in the first place. Belle then offers Austin the Black Pill. Belle takes Austin under her wing and helps him feed and take revenge at the same time.

Belle Noir is a regal - dare one say, vampiric - woman in her sixties. She dresses flamboyantly; shamelessly parading her affluence and success. Her most striking feature is perhaps her silver hair, styled into a tall 'updo'.

Belle Noir "sold her soul for greatness". She is unquestionably addicted to her own ambition and success as a romance novelist. Noir is willing to commit unspeakable horrors - even infanticide - to feed these addictions. But, Belle had a soul to sell in the first place. Before her transformation, Belle was a gentle, quiet, softly-spoken woman who poured her pain (mostly stemming from an abusive husband) into her writing. After taking the Black Pill, Belle's outer beauty comes to belie her inner ugliness. She is cruel, relishing in exploiting and (hypocritically) mocking Mickey and TB Karen's weaknesses and own addictions. To her 'equals', Belle can be loyal, charming, convincing, and interesting; albeit eccentric, affected, and pretentious. Belle Noir is certainly the living embodiment of a 'cautionary tale'. 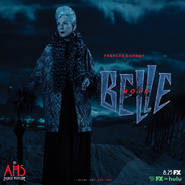 "There’s nothing more addictive than success."