His stature gave him unique access to roles that would otherwise be hard to cast and, therefore, he often played creatures and other characters that fit well with his height.

He was also a pre-school teacher until 2010, before he left to pursue his acting dreams.

He portrayed the Infantata, a Frankenstein-type of creature born out of perverse experiments in the first season of American Horror Story, subtitled Murder House. After being absent for two years from the show, he portrayed his last role in the series as Meep, one of the carnies of Fräulein Elsa's Cabinet of Curiosities in the fourth season, subtitled Freak Show.

On February 19, 2015, Woolf was struck by the side mirror of an SUV and rushed to the hospital in a critical condition. The SUV's driver was not charged as Woolf was reportedly jaywalking.

Although Woolf's condition improved to stable, he ultimately suffered a stroke while hospitalized and died on February 23, 2015, at the age of 34. 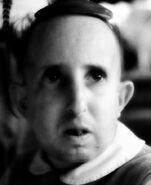