Bette and Dot Tattler are conjoined twins who were recruited by Elsa Mars as new members of her troupe of freak performers. They are characters in Freak Show portrayed by Sarah Paulson.

Elizabeth and Dorothy (Bette and Dot for short) were born in Alabama. The twins share nearly everything but personality. Impulsive dreamer Bette is enamored of movie stars like Betty Grable. The guarded and stoic Dot claims not to enjoy her sister's nighttime explorations of their shared body. After fleeing Alabama for unknown reasons, they live hidden in their mother's home, virtually prisoners. During an argument with her mother regarding this confinement, Bette flies into a rage and stabs her mother repeatedly with a table knife. The next night, wracked with guilt over her complicity in this murder, Dot stabs her sister/self with a pair of scissors.

Bette and Dot both are nearly identical in appearance, both having chin-length straight reddish brown hair usually contained with a headband. They usually have different colored headbands and wear colorful dresses.

Bette is usually very sweet and gentle, craving fame and luxury, and most importantly, freedom from her restrained life. Dot, on the other hand, is stern, withdrawn, and somewhat protective of herself and her sister. She is usually the one that makes the more important decisions and tries to show dominance over Bette.

They also can communicate through thoughts alone and upon discovering sexual acts begins to throw themselves at the men they are attracted to.

They are also around 30 years old, though they are very likely close to Dandy Mott’s age.

After Bill Palmer discovers the wounded girls and their dead mother, they are brought to the hospital and are stabilized. As homicide suspects, they remain under guard during their convalescence. They are visited by Elsa Mars who, after earning their trust, convinces them to flee the hospital to join her troupe of freaks and become their new star attraction.

There they meet their new family, from the frightening Meep to Jimmy Darling, whose charm gets a smile out of even Dot. However, charm isn't enough to convince her to be a "trained monkey" and she refuses the meals brought by Jimmy's bearded mother Ethel, whom she describes in her diary as the "Sasquatch champion of law and order in this hellish sty".

With a banner on the road advertising The Spectacular Siamese Sisters, it isn't long before the girls are discovered by a detective who places them under arrest as suspects in the murder of their mother as well as a string of homicides actually committed by Twisty the Clown. Jimmy comes to their rescue and, angered by his bigotry, kills the officer. Afterward, he rallies the carnies into an orgy of mutilation of the cop's body. This solidifies the family bond for the twins. When after their first performance they are propositioned for purchase with a price of $15,000 by Dandy Mott - who with his mother Gloria were the only few members of the audience and express interest to the freaks especially the twins (Bette in particular), they refuse.[1] Bette becomes jealous of Dot after she proves to have a better singing voice and Dot begins to dream of being separated from her sister so she can be a star.[2]

When Stanley pretends to be from Hollywood and pitches a show idea to them, he offers them a pair of cupcakes which he has injected with poison hoping to sell their body for profit, Dot refuses for both of them saying that they need to watch their figure, though it’s heavily implied they suspected his true intentions. The twins discuss with Elsa about Stanley's plans and the promises he's made for each. After her failed performance in front of a new live audience; Elsa, who has a strong desire for fame when she expresses jealousy of the twins' popularity and attention, attempts to get rid of the Tattlers by selling them to the Motts.

While the twins are at the manor, Bette starts to fall in love with Dandy while Dot is not amused by him and hates him. She believes he is boring until he tells them about the Brody twins and Dot pretends to like Dandy to get money and pay for the separation surgery. Dot has a vision of her being without Bette, who died in surgery, while she talks in a bar with Jimmy. Sadly to Dot, this would only partially happen.

Jimmy goes to get the girls from the manor but Dandy protests and once Jimmy realizes that Dandy is the deranged clown, he tells the girls to leave with him. After Dandy explains he read Dot's diary, she decides to leave and Bette goes with her. After Jimmy's performance, he goes to Elsa about how she sold the twins but Dot lies and said that she wanted to leave. The twins go to Else's tent later and explain the money they want since they protected Elsa from Jimmy. Later on, Bette gets a new makeover and they discuss their performance with Elsa but Dot doesn't care to much.

After Ethel finds out Elsa's evil plan, she takes the girls to a motel where they can be safe. Elsa and Stanley track the twins down and say a mob killed Ethel and they take them to a remote shed in the middle of the fields. Once the others leave, Bette and Dot confess there love for each other and their sacrifices they will make for each other. Later on that night, Bette as Dot go to Jimmy to confess their love but Jimmy denies saying he has a girlfriend and the twins understand and leave.

After Jimmy is arrested, Maggie goes on her tent to sit and drink but the twins are there and they offer the money to save Jimmy but they can't go to save him since they are freaks but Maggie says she will think about it.

Bette and Dot now spend their time at the freak show burning their diaries and kissing Toulouse. After Chester comes, the twins quickly have a liking. Chester goes to see the twins and he tells them about cool items for magic tricks Paul showed him and he gives them a music box. Chester asks them to be his assistants and they agree. At Chester's first show, the twins are seen helping him. The twins visit Chester and massage him and they have sex starting a relationship between them.

The twins appear at Stanley's thank you party but the tables turn and they proceed to kill him. Chester and the twins have sex and they get him to remove Marjorie which he does. Dandy goes to the girls and explains Chester's past much the girl's surprise but they don't believe him and they tell him to go. Chester later rehearses with the freaks and he tried to saw the twins in half and they leave afraid. Once the twins find out the freaks' evil plan, they warn Elsa running in on her not having legs confused but stern about her leaving which she does.

After Dandy's killing spree, he kidnaps the twins and he takes them to the manor. They get married but the twins invite Desiree and Jimmy who knock Dandy out. Unfortunately for Dandy, the two of them had realized that they were his weakness, and they spike his drink so that he will fall unconscious. The freaks watch Dandy die in a glass box and they tell him that they hate him for what he had done to them. The twins are last seen married to Jimmy (as they realized he did truly love them), expecting a child, watching Elsa perform on television.

The most likely basis for the characters of Bette and Dot are the famed sideshow performers Violet and Daisy Hilton.

Violet and Daisy were born in Brighton, England in 1908. They were joined at the hip and (unlike Bette and Dot) shared no internal organs. They had been born out of wedlock to a single mother and into poverty. Unable to cope with looking after two conjoined twins, their mother sold them to her boss Mary Hilton. Hilton, according to the Twins, was a corrupt, ruthless, abusive and exploitative woman who quickly saw the financial gains that could be had from the twins. She quickly began training the girls in singing and dancing so that they could pursue a career in vaudeville. While they were prepared for performing they were constantly mistreated and abused by the Hiltons who saw the twins as little more than possessions and a means of income. The twins were as young as three when they began touring but quickly proved to be popular performers who brought in large amounts of money (which the Hiltons kept to themselves).

While touring in America, Mary Hilton died and the twins were given into the guardianship of Hilton's daughter Edith and son-in-law Meyer. Meyer proved to be equally as abusive and exceedingly controlling of the girls (much like Bette and Dot's mother, Meyer forbade the twins from doing anything without express permission). Meyer and Edith purchased a mansion in Texas from the money the Twins had earned while the Twins were sent on tours of America. During their tours, the twins were caught up in a scandal whereby they were accused of breaking up a marriage and were sued $250,000. A lawyer called Martin J. Arnold, went to Texas to speak to the Twins on this lawsuit and during conversations with the twins discovered the abuse and exploitation the Twins had endured at the hands of the Hiltons. Arnold took on the twins' case and 1931 the Twins received a large sum of money and their freedom.

The twins continued their careers with a new show "The Hilton Sisters' Revue" and starred in Tod Browning's 1932 film Freaks. Their characters in Freaks are similar to those of Bette and Dot. One is reserved and disapproving while the other is optimistic and quick to romanticize. However, after their appearance in Freaks, The Twins popularity declined and they became self-destructive. They had affairs, sham marriages, and legal problems. By the 60s, they were penniless and restored to touring drive-in movie theaters. These tours were so unsuccessful that the Twins were abandoned by their manager at one drive-in and left without any money or transportation. With little option, The Twins found employment in a grocery store in the town they had been left in. Two years later the Twins were found dead in their home. A physical inspiration for Bette and Dot was most likely the modern day conjoined twins Abigail and Brittany Hensel. Just as Bette and Dot do, Abby and Brittney have each their own heart, three lungs, three kidneys, a widespread chest, two necks (one appearing shorter than the other), two heads, one set of arms and legs, and one vagina. The twins are fully functioning and must work together to complete a task as one twin controls one half of the body that the other cannot. 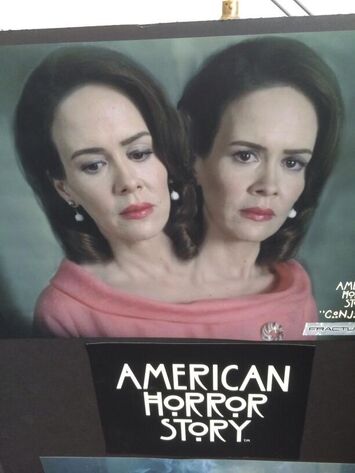 Prototypes of Bette and Dot, where they had a hairstyle similar to Lana Winters' and wore earrings.[1] 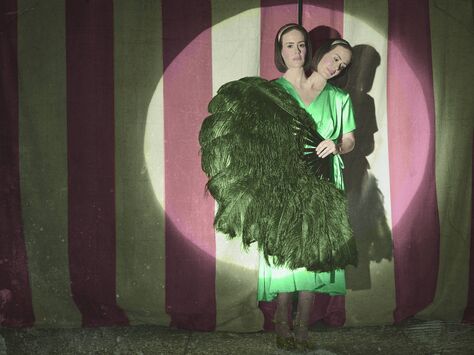 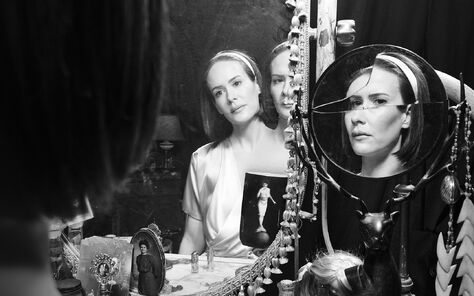 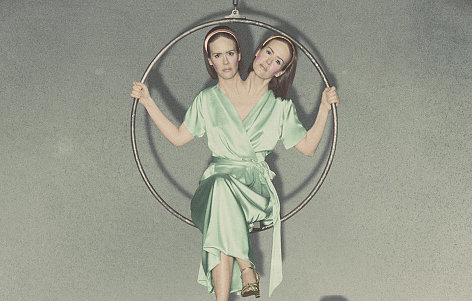 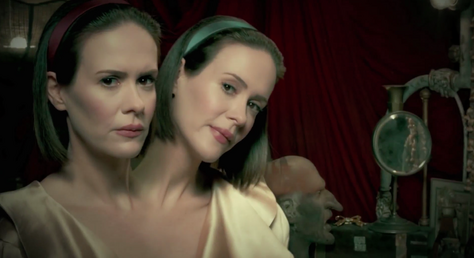 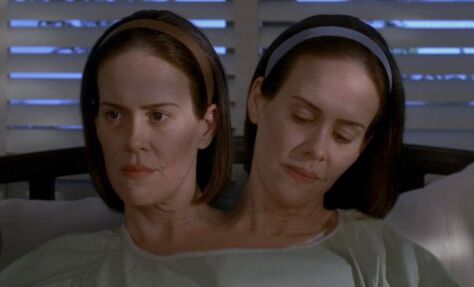