View source
watch 01:37
Who is Billie Dean Howard?
Do you like this video?
Play Sound

Billie Dean Howard is a medium who is hired by Constance Langdon, and later, Iris. She is a character in American Horror Story portrayed by Sarah Paulson.

Billie Dean Howard is a medium Constance found on Craigslist. She has been helping Constance for years, trying to get Tate Langdon to move on to the next world. However, she is also weary of Tate, as she becomes to suspect a Hellish conduicy within him.

Billie Dean mentions she is in the process of shooting a reality show for Lifetime, in which she would help the bereaved communicate with their departed loved ones. Years later, she becomes a famous medium among celebrities.[1][2]

Billie Dean Howard is a middle-aged woman who dresses "business casual." She often wears suit coats with jewellery or floral shirts. Her character was called a “Lee Press-On Nails Psychic” to explain her sometimes "cheap" look. Her hair is medium blonde, parted toward the right side and curled at the ends. Her complexion is pale and she wears makeup, light lipstick, mascara, and eyeliner. She has a furrowed brow and a serious expression on her face and plump, full lips. Her character as the psychic medium is self-involved and brash. She takes herself very seriously, but often uses humorous or sarcastic quips to her advantage. She is very involved in her work and gets the job done to the best of her ability. While working with Constance, Billie Dean is able to explore the other spirits living in the Murder House. She refuses to be called for "psychic", as she states that she can not see the future, instead she describes herself as a "medium".​[3][2]

Billie conducts a seance to contact Addy and Constance introduces her to Violet Harmon.[3]

Billie Dean tells Constance that a child conceived by a human woman and ghostly father would be the Anti-Christ who will bring about the end of times.[4]

Constance and Violet seek her help to get rid of Chad and Patrick. She tells them of one very successful exorcism, in the year 1590, at the Roanoke Colony. Billie Dean says that all settlers died and subsequently haunted the local Native Americans. One of the elders used property that the English settlers left behind and burned it. He then said "Croatoan" to cast a spell to banish them. Billie Dean recognizes that Violet is dead and speaks to her through telepathy. She tells Violet that she is sorry that she died so young. Violet pleads with her not to tell Constance. Billie Dean talks about the great evils and the energy that feeds the house, lamenting all the regret and pain many of the spirits feel. Tate then appears in the background. She is visibly shaken and states that "He cannot be here". When Violet asks what Billie Dean's reaction was all about, Constance replies that it was because it is emotionally difficult for a medium to encounter a dead person. Since Violet herself is dead and Billie Dean has no problem with her, Violet suspects this is untrue. However, she later learns the truth about Tate's background.[5]

Billie Dean Howard is invited at the Hotel Cortez by Iris, in order to communicate with her friend Liz Taylor's deceased boyfriend, Tristan Duffy. Billie Dean wants also to film an episode of her hit Lifetime show in the notoriously supernatural hotel. The medium wades through the sea of ghost voices and senses a strong masculine presence, and explains that Tristan simply doesn't want to speak to Liz.

On October 30th, 2022, after three TV special filmed at the Hotel Cortez, Billie Dean tries to communicate with John Lowe's ghost on Devil's Night for her TV show and then joining the serial killer dinner ghosts without her camera crew. She is threatened and told to keep her mouth shut by the ghosts and Ramona Royale, then sent running from the Hotel Cortez.[1]

When Madison Montgomery is tackled by Beauregard Langdon and Behold Chablis attempts a spell in order to confront the ghost, they are interrupted by Billie Dean, who warns them how dangerous is attacking the ghosts in the Murder House, introducing herself as a "medium to the stars" and recognizing Madison as a witch. Thereafter, the trio is approached by Constance Langdon's ghost coming. Later, Billie refuses to give Madison and Behold any information about Michael Langdon.[2]

She is a very gifted medium, with wide-ranging psychic abilities. Constance Langdon described her as "100% authentic". Her gifts manifested for the first time when she was 25 years old, while she was brushing her teeth and her employee's ghost appeared. 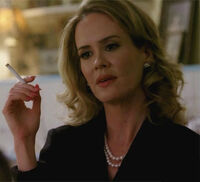 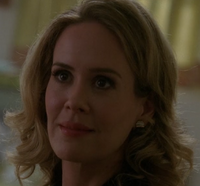