Alfonso Gomez-Rejon
"Bitchcraft" is the first episode of Coven. It premiered October 9, 2013.

A young girl, Zoe (Taissa Farmiga), is shattered to discover she possesses a strange genetic affliction tracing back to the dark days of Salem. Zoe is whisked away to Miss Robichaux's Academy for Exceptional Young Ladies, a mysterious school in New Orleans devoted to safeguarding the few remaining descendants who share this unique bloodline. Harboring a secret agenda, Fiona Goode (Jessica Lange), the most powerful witch of their generation, returns to town, reigniting old rivalries with the Coven's deadly enemies, the Voodoo.[1][2]

During her house party in New Orleans, Madame Delphine LaLaurie introduces her three daughters to potential suitors, but her youngest daughter Pauline makes everyone uncomfortable when she speaks suggestively about her "talent". After the party, Delphine performs her nightly ritual of brushing blood on her face to tighten her skin when her husband Louis alerts her that Pauline was caught with a slave. Delphine sends the slave to her torture chamber in the attic and has a hollowed bull head placed on his head. She gushes about her love for Greek mythology, and with her favorite character being a Minotaur, she is delighted to finally have one of her own.

Zoe Benson's boyfriend Charlie sneaks into the house while her mother is away, and the couple plan to have sex for the first time. While they do, Charlie begins to bleed from the nose and eyes, convulses and dies while Zoe screams. Later, the doctors attribute his death on a strange and unexpected aneurysm. Zoe's mother privately tells her that it is Zoe's power, with Zoe and her mother's side of the family being descendants of the Salem witches. Since Zoe is the latest person in the family tree to show signs of magical powers, Zoe's mother informs her that she must be taken to a special boarding school in New Orleans. Moments later, Myrtle Snow and her albino menservants escort Zoe away. At Miss Robichaux's Academy for Exceptional Young Ladies, Zoe is welcomed by three hooded and masked figures who scare her but turn out to be the other students in the Academy. Zoe recognizes one of the three as Madison Montgomery, a movie star, while the other two introduce themselves as Queenie and Nan. Cordelia Foxx, the headmistress, walks in and explains the history of the Academy, and how the name is actually just a cover-up for a safe haven for witches. When asked, Cordelia also explains that the "Supreme" is the witch who is the only one among her generation who embodies most or all powers. She explains that their survival is important because of the dwindling population of witches, as well as the dangers of getting caught.  Recently, a witch named Misty Day, who had the power of resurgence and brought a dead bird back to life in front of Cajun Pentecostal worshipers, and was burned to death before Cordelia could find her.

Fiona Goode visits the research facility of her late husband in Los Angeles for an experimental serum that would make her young again. Despite her demands, the scientist, Dr. David Zhong, refuses to give it to her for two years due to the approval process.  She threatens him with the fact that her late husband has funded nearly all of his work. Five days later, he visits her penthouse and she insults him because the drug has not taken effect.  He decides to resign so that she has no more power over him, unintentionally insulting her age in the process. She telekinetically tosses him around the room and then kisses him to drain his life from him. She appears to have gotten younger while he has aged and shriveled.

During dinner served by Spalding, the girls discuss their powers. Madison recalls the time when she killed her critical director by telekinetically unscrewing a stage light, causing it to fall and crush him. Queenie and Madison fight and Queenie reveals her Voodoo Doll powers by stabbing herself on the hand with a fork and sending the wound to Madison and threatening to slit Madison's throat, but Clairvoyant Nan calms her. Madison declares Zoe to be her new best friend since she is the "most normal" one there.  She tells her they will go to a frat party later. Meanwhile, in the greenhouse, Cordelia is making potions with plants, and she is surprised by her mother Fiona's sudden appearance. Cordelia is cold to her mother, the current Supreme, for her abandonment to both her own daughter and the Coven.  Meanwhile, Fiona is disappointed in Cordelia's lack of ambition since, as the daughter of the Supreme, she could have had anything she wanted if she tried. Fiona tells her that she plans to stay here and teach the girls how to survive since she thinks Cordelia is insufficient.

College student and fraternity member Kyle Spencer arrives at a party with his frat brothers in a private bus. Madison catches everyone's attention, including Archie, one of Kyle's frat brothers, and is pulled away by other party-goers, leaving Zoe behind. Kyle and Zoe meet and are immediately smitten with each other, but Zoe tells him that she cannot be with him, not wanting him to experience Charles's fate as well. Meanwhile, Madison is tricked by Kyle's frat brother into using a spiked matchstick for her cigarette, making her high and light-headed. He drags her into a room with the other frat brothers where they gang-rape her. Kyle catches them while helping Zoe look for Madison, and all the boys run back to the bus, leaving her on the bed. Kyle attempts to make them stay, but is knocked unconscious. Zoe finds Madison and attempts to run after the bus, but fails. Madison comes outside and telekinetically causes the bus to flip and crash.

The next day, news reports reveal that two frat brothers survived, but their identities are not disclosed. Zoe is hoping Kyle survived and is upset that Madison feels no remorse for her actions. Fiona meets the four students at breakfast and scolds Madison not because she killed people, but because she was sloppy and could raise suspicion. Fiona takes them on a walking field trip around New Orleans featuring a tour of the LaLaurie House. They learn from the tour guide that Marie Laveau, a black voodoo witch, tricked Delphine into drinking a vial that was supposedly a love potion to help Delphine with her husband's infidelity but lead to Delphine's apparent death. Outside, Nan tells Fiona that she hears Delphine under the patio's paver bricks.

Meanwhile, Zoe slips away from the group and goes to the hospital to see if Kyle is one of the two surviving frat brothers on the bus. Sees that the only two are a black frat brother, and Archie, the frat brother who initiated Madison's gang rape. Zoe realizes that even if there are threats to witches in the world, she is a danger to others more than others are to her, and finally accepts the powers she has. She then proceeds to rape him while he is unconscious, killing him with her black widow power.

After settling her belongings in the academy, Fiona hypnotizes two men to dig out a heavily-chained box. She opens it and finds the gagged-and-bound but alive body of Delphine.

Bitchcraft
Dr. David Zhong is a biochemist who is making great strides towards a cell regenerating serum dubbed RM47. As his research is funded by grants from her late husband, Fiona Goode demands that he give her the untested drug. He refuses, saying it would take two more years to make the drug fit for human consumption, so she bribes him. Five days later, she sends for him after the drug still has no effect and her anger at its failure to revive her youth results in Dr. Zhong's decision to resign. In a fit of anger, Fiona telekinetically seals her hotel room and flings Dr. Zhong against a wall after he tries to attack her. She seals his fate with a kiss that drains him of his life force.

Bitchcraft
Charles "Charlie" Taylor was the late boyfriend of Zoe Benson. Whilst having sex with Zoe, Charlie mysteriously dies of a brain aneurysm, later revealed to be caused by Zoe's latent witch abilities.[4]

Bitchcraft
Nora Benson is the mother of Zoe Benson. After Zoe accidentally causes the death of her boyfriend whilst having sex, Nora reveals to her daughter that she is a witch with lineage dating back to the time of Salem. Deciding that it is too dangerous to keep Zoe with her, Nora allows Myrtle Snow to take Zoe to Miss Robichaux's Academy, a boarding school for young witches in New Orleans. As she watches Zoe being taken away by the Coven's bodyguards, Nora asks Myrtle if she can at least drive her daughter to the station, but the latter affirms that Zoe is now under their care.

Bitchcraft
Archie Brener is a frat brother of Kyle Spencer who attended a party that was attended by Zoe Benson and Madison Montgomery. He used a spiked matchstick to light Madison's cigarette and drags her to a room while she is light-headed and dizzy. He gang-rapes her with his other frat brothers until Kyle enters and stops it. They all run to the bus, and when Kyle tries to stop them, he punches Kyle to knock him unconscious. He leads the brothers back to their bus and plots to delete videos and any evidence that they drugged and raped her, but Madison uses her telekinesis to flip the bus over. He was one of the two surviving brothers, but Zoe later visited him at the hospital and bitterly mounted him, killing him with her black widow power. 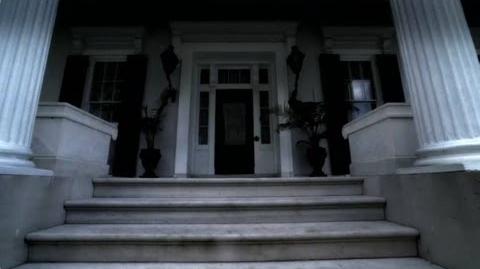 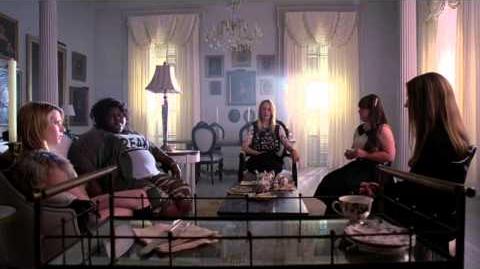 Inside The Coven - Episode 1 Commentary
Commentary