An unexpected visitor arrives at the White House and reveals the details of the horrific plan. [1]

Eisenhower is having difficulty with the treaty trading the torture of Americans for technology. Subject 1, inhabiting Mamie, continues to threaten the consequences for the First Lady.

Three years later, 298 more incursions have been observed with no communication from the aliens. One materializes on the North Lawn in a beam of light. The new visitor, who introduces himself as Valiant Thor, dispatches guards and agents with ease on his way to the Oval Office. He is the android liaison tasked with the creating of the hybrid species. He presents to them a handheld computer, which strongly resembles an original iPod with a touchscreen.

Mamie is trying to follow up her legacy of promoting adult birthday parties by starting a tradition of decorating for Halloween.

Eisenhower tracks screams trough the White House ventilation system to find a concealed door in the service tunnels. A panel on the door recognizes his handprint and the door opens to an elevator taking him 20 stories down. Valiant Thor says that the President's visit was not expected for several weeks yet. The android claims the tunnels in which experiments are being conducted were built years before, in preparation for nuclear fallout, but the President was unaware of them. Several specimens of hybrid, in various ratio of human / extraterrestrial aspects, are stored in the lab. Valiant Thor explains that the extraterrestrials are convinced Eisenhower (and humanity, by extension) would cancel the treaty if humans saw their true forms. Valiant Thor intimates that the extraterrestrials will take what they want by force rather than deal with the Russians.

Mamie is undeterred when her husband brings concerns to her. She suggests that, as "Val" mentioned they were getting crowded under the White House, space be made at the facility in Nevada she heard talked about. Soon after, he secretly deeds the facility to the aliens by executive order.

Hearing an unfamiliar noise in the residence, Eisenhower finds Mamie astride Val, sexually engaged. The sight causes him to faint, clutching his chest. When he awakes, she is unapologetic, calling Thor both a machine and a visiting dignitary. She considers it revenge for an affair he had during the war. Dejected, the President walks away questioning if he even knows his wife anymore.

Sometime in 1962, Marilyn Monroe is on a film reel talking about the alien treaty. Nixon and Eisenhower review the film at FBI Headquarters. FBI Director J. Edgar Hoover obtained the film in his archive investigating Communist sympathizers. Eisenhower says that no one will believe her, and that her vices can be exploited. Monroe soon finds suited men in her home who stage her fatal pill overdose. A drunken Nixon calls President Kennedy with his condolences, but with advice that Kennedy not disclose alien secrets to his lovers in the future.

A year later, a motorcade unloads Nixon, Eisenhower, and now President Lyndon B. Johnson at Area 51. Thor greets the men and introduces himself to the new President. The men are shown a warehouse full of pods holding preserved hybrids.

Troy Lord is about to give birth, and Theta enters his mind to calm and still him. She opens his abdomen with a laser scalpel. An attendant pulls a pod from Troy's body, then cuts it open to reveal a hybrid baby. Though the baby is strong, it still has obvious alien physical characteristics (namely, both eyes). As the closest hybridization attempt yet, Theta instructs that it should be stored. The newborn's throat is cut as it is placed in preservation fluid. Troy gasps and strains trying to get to the baby, but is quickly subdued by Theta.

One week later, he rejoins his friends in the dining room. He explains that he delivered the baby, to which he was psychically connected, before it was slaughtered. Cal comforts his boyfriend, as they lament the experience. Calico walks over to the table to dissuade the group from plans to escape. Since 1969 she has produced two or three offspring a year, and in that time no one has escaped Area 51. She takes them on a tour of the "moon landing" set, telling them of how the historic event was staged: Neil Armstrong and Buzz Aldrin — who were supposed to be in orbit — were in her bar talking about how they improvised the lines said. During the night she spent with the astronauts, suited men abducted her. She awoke implanted with a fetus and began wandering the facility, eventually finding the set and director Stanley Kubrick. The landing hoax was meant as propaganda to guide the public into believing rapid technological advancement was plausible. She thanks them for their time and leaves, with the group finding peace "on the moon".

Later, Cal thinks it is time to deliver. He is not ready for them to take his offspring, and Troy offers to buy some time. They end up at the moon landing set, and Troy believes he can cut the baby out of his boyfriend himself. Using a metal scalpel, he cuts Cal open and pulls out the writhing pod. The hybrid girl is alive, and they initially are in awe of her. When her hips emerge from the pod, her squid-like tentacles suddenly wrap around her father's head and the toothed mouth underneath them chew into his face.

Lyndon B. Johnson was the 36th President of the United States, taking office after the murder of President Kennedy.

Neil Armstrong was the first person to walk on the Moon. Or so we were taught.

Stanley Kubrick was the director responsible for the filming of the Apollo 11 fake spaceflight. 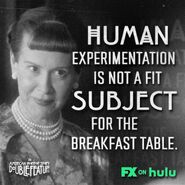 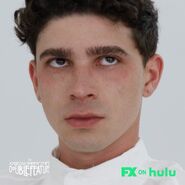 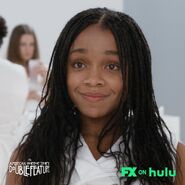 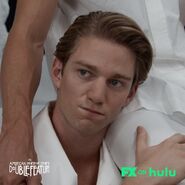 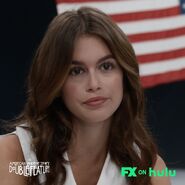 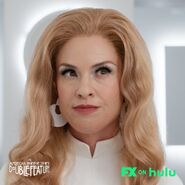 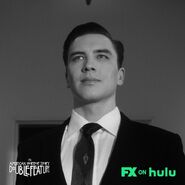 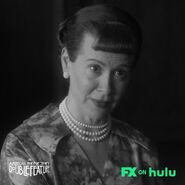 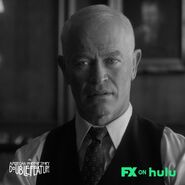