Bob Thompson is a local Michigan network news anchor with a questionable job integrity. He is a character in Cult portrayed by Dermot Mulroney.

Bob is a man in his fifties with grayish dark hair and usually wears a suit. Bob is a strict but unethical news anchor. More often than not Bob uses his position to flirt with younger colleagues and employees in a way that Beverly Hope described as being sexual harassment. Bob is likely bisexual, having had relationships with both Serena and a male gimp (a sexual fetishist who likes to be dominated). Bob is into BDSM subcultures, specifically bondage. Having licked blood from his glove in an ecstatic way, Bob could hide a much darker personality than the one he shows.

Bob did a news report on protestors protesting Ally Mayfair-Richards at the Butchery On Main, after she accidentally shot Pedro Morales, an employee.[1]

At the office, Bob says on behalf of everyone that they were happy to see Beverly Hope back and she replies it is great to be back. Later, Bob was flirting with Serena, an employee, offering her to spend the weekend with him at his lake house. Beverly interrupts them, and Bob tells her to cut a minute out of her segment and he leaves.

In retaliation, Beverly later cuts Bob's tires. Bob tells Beverly that her stories are full of holes and that crime is down. About Serena's murder, Bob says that Serena's parent are suing them for not protecting her and how they can't air the tape of her death. Bob fires Beverly and she threatens him to tell the press conference that he harassed the dead girl and he tells her to get out of his office.[2]

At his house, Bob is waking up the attic licking blood off his glove and getting ice cream when a group of clowns barges in and beat him before taping his mouth shut. The clowns go upstairs and kill the gimp only to take Bob up there where they stab him and then Beverly axes him in the head.[3] 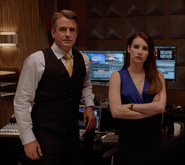