Chief Burleson is is the new head of police, called to investigate disturbing occurrences in Provincetown. She is a character in Double Feature portrayed by Adina Porter. Unlike her predecessor, Burleson doesn't look the other way. 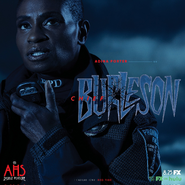