View source
watch 02:56
Doctor Strange in The Multiverse o Madness - The Loop
Do you like this video?
Play Sound
This article is about the episode. For the idyllic summer retreat, see Camp Redwood (location).

In the summer of 1984, five friends escape Los Angeles to work as counselors at Camp Redwood. As they adjust to their new jobs, they quickly learn that the only thing scarier than campfire tales is the past coming to haunt you.[1]

Three young camp counselors make out in a cabin but one, a young woman, is wary of a jingling noise she hears outside. A figure enters the cabin, and the trio are stabbed and stacked together before being placed facing the rest of the cabin, who have all been murdered. The killer, a hooded figure with a jingling keychain on his belt and a necklace of severed ears as souvenirs limps from the cabin.

Xavier Plympton leads a "Slimmercise" aerobics class for Montana Duke, Ray Powell, Chet Clancy, and Brooke Thompson. Montana and Brooke meet and bond in the shower, and Montana introduces newcomer Brooke to the others. Xavier describes the terror that the Night Stalker is wrecking on Los Angeles, and that he is escaping to the re-opening Camp Redwood to avoid the murders, convincing the others to join him as counselors at the camp. Brooke demurs, saying that she can't afford to miss her summer college courses.

That night, Brooke is assaulted in her home, as a Satanist man claming to be the Night Stalker intrudes and attempts to steal her jewelry but he is interrupted before he can harm her.

The next morning, July 28, 1984, Brooke joins the rest of the group so that she can evade him and watches the others take drugs and drink. They make a pit stop at a gas station in the town of Red Meadows, where Xavier remotely checks his answering machine messages from a payphone, which include a threat from an angry man who knows where he is going. The gas station attendant discovers they are headed to the camp and warns the group that they are going to die, and that the camp should not have been re-opened. While distracted with a marijuana bong, Xavier appears to hit a man walking in the road. It turns out that he has lost his memory and has older injuries so they agree to take him to the camp for medical attention.

The camp's owner, Margaret Booth, instructs the counselors to take him to the infirmary, where nurse Rita tends to him. Margaret takes the group on a tour of the camp where they encounter Chef Bertie, an original camp chef who volunteered to re-open the camp with Margaret. Margaret took the payout from her husband's death to buy the camp in order to have a refuge for children aligned with her conservative values. She is strongly against premarital sex, and warns the counselors against it. Later, the counselors gather around a fire and Rita tells them of the incident from 14 years before: the worst summer camp massacre of all time carried out by Benjamin Richter, aka Mr. Jingles, who was a Vietnam veteran who was discharged dishonorably after it was discovered he was taking severed ears as trophies from his war victims. Rita claims that there were 10 victims, but Margaret approaches and corrects her that there were only 9; she was a survivor who had been presumed dead and had her ear cut off. She was the star witness at Richter's trial after he was caught and warns the group not to tell the campers about the incident. Meanwhile, the amnesiac man awakens in the infirmary and discovers his ear has been removed.

Brooke finds him awake and guides him back to bed but he is confused about the camp reopening, and warns her that something bad is going to happen. She tells the rest of the group, where they are intruded upon by Trevor Kirchner, the activities director. Montana recognizes him from somewhere and later the two begin a sexual encounter in the lake but are interrupted by an approaching storm and car headlights at the edge of the lake.

At Red Meadows Asylum, a facility for the criminally insane, patients are running amok. Art, an administrator, tells Dr. Hopple that Richter has escaped and hit the master release for all the cells on his way out. Hopple finds a newspaper clipping in the cell announcing the reopening of the camp.

The gas station attendant, Ed, repairs a car from underneath at the station's garage bay. Richter crushes Ed with the car by lowering the jack. Richter then takes his keys and drives Ed's truck to the edge of the camp.

The counselors, Rita, and Trevor watch the opening Olympics ceremony and a jealous Chet accidentally injures Ray's hand. Brooke seeks medical supplies for him and finds the amnesiac man impaled on a hook in the infirmary. She reaches the others while being pursued by Richter, but they do not believe her and the hiker's body is missing when they investigate. Unable to sleep, Brooke hears the pay phone ringing, despite the hiker saying earlier that the lines were down. She answers the line and hears the jingling of keys, while she herself is observed by the Night Stalker from afar.

Midge is a a counselor at Camp Redwood. She is a character in 1984  portrayed by Emma Meisel. In 1970, Midge was making out with Helen and Eddie, where Margaret kills them for never being nice to her, rude to her, and bullying her along with Benjamin Richter. When Montana and Xavier continue to kill innocent people, Helen, Eddie, and Midge do not think it is right.  A flashback shows a scene where Eddie, Midge, and Helen make fun of Benjamin and Margaret. When the ghosts capture Benjamin, he tells them that the "Lady in White" is his mother, much to the ghosts' suprise. Midge is used as bait to attract Bruce so the ghosts can kill him. When Bobby comes to Camp Redwood, Montana explains that the ghosts killed Rameriez to keep Bobby safe. Montana then explains that the ghosts killed Margaret and threw her in a woodchipper. Midge is last seen torturing Margaret with the rest of the ghosts.

Eddie is a a counselor at Camp Redwood. He is a character in 1984  portrayed by Conor Donnally. In 1970, Eddie makes out with Midge and Helen but Margaret kills the three for not ever being nice to her and being rude to her all the time, he then becomes a ghost. When Xavier and Montana continue to kill innocent people, Eddie, Helen, and Midge do not think it is right. A flashback shows Eddie, Midge, and Helen making fun of Benjamin and Margaret. When Benjamin comes back he tells the ghosts, including Eddie, that his mother is "The Lady in White", much to the ghosts' suprise. When Bobby comes to Redwood, Montana explains the ghosts kill Rameriez to keep Bobby safe. Montana then explains that the ghosts threw and killed Margaret in a woodchipper. Eddie is last seen tortuing Margaret with the rest of the ghosts.

Helen is a a counselor at Camp Redwood. She is a character in 1984  portrayed by Kat Solko. In 1970, Helen is making out with Midge and Eddie but Margaret kills the three of them for never being nice to her and always treating her badly. The three of them then become ghosts. When Xavier and Montana continue to kill innocent people, Midge, Helen, and Eddie do not think it is right. A flashback shows Eddie, Midge, and Helen making fun of Benjamin and Margaret. When Benjamin comes back he tells the ghosts, including Helen, that his mother is "The Lady in White", much to the ghosts' suprise. When Bobby comes to Redwood, Montana explains that they have been killing Rameriez to keep Bobby safe and that they threw Margaret in a woodchipper. Helen is last seen torturing Margaret with the rest of the ghosts.

Ed is a gas station attendant at Roy's Gas & Grub in the town of Red Meadows. He is a character in 1984  portrayed by Don Swayze.

In the summer of 1984, Ed warned Xavier, Chet, Montana, Ray and Brooke from going to work at Camp Redwood, saying that they were all going to die there. That same night, Ed was repairing a car when he was attacked and killed by Mr. Jingles, who had recently escaped from Red Meadows Asylum, a facility for the criminally insane.

Art is an administrator at Red Meadows Asylum. He is a character in 1984  portrayed by Mitch Pileggi.

Art informed Dr. Hopple that Benjamin Richter aka Mr. Jingles had escaped from the facility for the criminally insane. Three hours earlier, in fact, the man had killed an orderly and opened all the cells causing the various inmates to run amok around the perimeter of the building. Art assured Dr. Hopple that a team was already scouring the area in search of the fugitive. A flashback shows Art bringing Donna to see Benjamin but Art is a little weary of her. 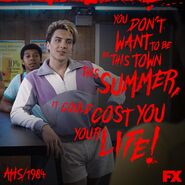 "He’s not talking about the heat."