A struggling writer, his pregnant wife, and their daughter move to an isolated beach town for the winter. Once they're settled in, the town's true residents begin to make themselves known. [2]

Alma Gardner counts roadkill animals while she drives with her parents, Harry and Doris, to their vacation home. Harry barely misses a buck laying dead in the road with its throat torn out. As they drive away, something unseen by them snatches it away from the road.

They approach Provincetown, Massachusetts on a misty afternoon. Martha, the house manager for the host family's house, which Doris will be reinvating the house. Harry is a screenwriter and is planning on writing a television pilot, while Alma is a violin prodigy. Harry walks to the market to pick up supplies, and notices residents turning on red porch lights. His cart slams to a halt when a frantic homeless woman, Karen, accosts him and warns him to leave. Mikey, the market owner and Martha's brother, demands she leave and not scare Harry away.

While Alma plays, Harry experiences writer's block and Doris ponders her next stylistic move. Meanwhile, a fox explores the beach's dunes and is snatched by an unseen force. Harry subtly blames Alma for distracting him, but Doris breaks the tension by taking their daughter for a walk. They pass a cemetery, observed by a strange pale bald figure. He gives chase and they run into the house. Harry rushes to lock the doors and the unearthly figure hisses at him, baring his teeth.

Later, Chief Burleson investigates the complaint and assures Doris that the man was simply trying to scare her and was probably high on drugs. Harry mentions the case of a nearby "Truro family that was killed in their beds, but the Chief insists nothing is amiss and the town is safe. The family has misgivings but decides to stay for the opportunity.

Alma hears a tap on her window, and looks outside to see a trio of ghoulish figures (including the man that chased them earlier). Her parents put Alma back to bed, but decide not to call the police. Harry spends the night on the couch, drinking, and awakens in the morning having not written a word. Struggling to wake, he goes for a run.

On the beach, Harry discovers two corpses on the beach, with their guts ripped out. He vomits and the police are called. The medical examiner brought by Burleson says that he suspects a shark attack, despite Harry's doubts. That night, Harry plans a date night with Doris at The Muse, the only restaurant opening during the winter, while Martha babysits Alma. However Doris vomits, sick from stress, thus canceling their date night. Harry goes to The Muse alone, where Mickey, a prostitute, approaches and propositions him. Harry declines and goes to drink alone, where he is entertained by a singing duo, Sarah Cunnigham and Austin Sommers, accompanied on piano. Lonely, Harry calls Doris to check in before she falls asleep. Outside, five of the pale creatures observe while they contort.

The singing duo send Harry a drink to cheer him up. He comes over and they conserve. Austin is a three-time Tony Award-winning playwright, while Sarah is a best-selling romance author, going under the pseudonym "Belle Noir" They say that Provincetown in winter inspires them, and always walk away with creative masterworks. Harry admits that he's creatively blocked, but they assure him it won't last long.

Karen storms in and starts collecting table scraps. The bartender tries to drive her away, but Austin calls out jokingly to leave her alone. Karen notices Harry and warns him again to run, before the "bloodsuckers" get to him. Ne;;e writes it off as an inspiring experience.

Harry returns home, finding his wife and daughter asleep. Once again, he brews tea for a night of writing. An ajar window startles him, and he is attacked by one of the strange bald men. Defending himself, he manages to beat in the creature's head with a coat rack.

Belle serves as Mickey's client for the evening, and she offers to house him overnight, but he declines. She counters with an offer to pay him for a taste of blood, which she has done before (nearly killing him the last time). He again declines, but she says she will drink from him or he gets nothing. He reluctantly agrees, and she gashes open his arm before biting in with her suddenly pointed, shark-like teeth. Outside The Muse, Karen retrieves trash from the dumpster where Belle calls her, telling her she has three hours to complete their deal, though Karen begs to get out of it.

The police carry away the corpse and clean up the scene. Burelson says that they must give statements the next day, but have every right to defend themselves from an intruder in their home. Harry believes that the intruder was not a "tweaker" thief, but tried to rip his throat out. The chief insists he come to the station in the afternoon. The parents agree that they should leave, but that Doris still has a job to do.

Karen arrives at Belle's home with a human baby, in exchange for drugs. Karen is terrified of Belle, but less so than the others that Belle is protecting her from.

Harry begins packing, but Alma says she doesn't want to go back to New York. Harry suggests they go to Nantucket. Harry receives a call from Austin, inviting him for a "cure" for his writer's block. At his house, Austin tosses him a bag of unnamed black pills, which despite spiking writers' creativity. He insists there are no side effects and the "catches" are irrelevant. He expounds that if writing is a necessity for Harry, then the costs don't matter. Harry begins to walk away, but Austin places the pills back in his hands before he leaves.

Ursula, Harry's agent, calls and insists that he needs to finish the pilot as soon as possible. His safety nets are gone, and he will not recover professionally if he does not get the project done. Feeling he has no options, Harry takes a single pill. Alma watches from afar.

Martha Edwards is the caretaker of The Brown House and the Vice-Chairwoman of the Provincetown City Council.

Mikey Edwards is the owner of a market in Provincetown. 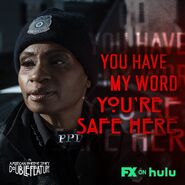 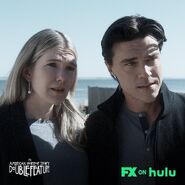 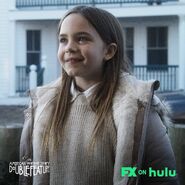 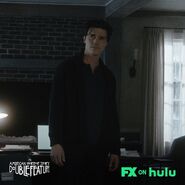 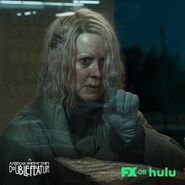 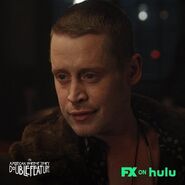 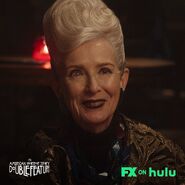 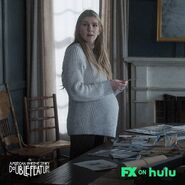 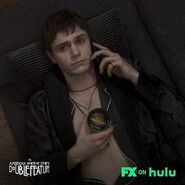 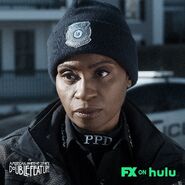 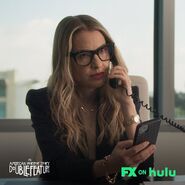