Gooding is an American actor with a long career in film and television. He made his screen debut in 1986 on Better Days and had small roles on a variety of television series before transitioning to film in the 1990s. Since then, Cuba Gooding Jr. has had a plethora of screen credits such as Pearl Harbor (2001), Zoolander (2001), Snow Dogs (2002), American Gangster (2007), Selma (2014), and many more. Gooding Jr. recently returned to television acting with recurring roles as Sam Fraunces in The Book of Negroes, Isaac Monroe in Forever, and as the lead actor portraying O.J. Simpson in The People v. O.J. Simpson: American Crime Story. He portrayed Matt Miller and Dominic Banks in American Horror Story: Roanoke.[1] 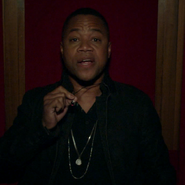