Dandy Mott is the son of Gloria Mott. He is a character in Freak Show primarily portrayed by Finn Wittrock. Though physically beautiful, Dandy finds himself more in common with the performers of Elsa Mars's freak show and aspires to join the troupe. After being denied, his mother hires a twisted clown for his amusement, and he becomes the serial killer's self-appointed protégé.

Dandy was Gloria Mott's only child and was spoiled throughout his life. He lived in a mansion with his mother and their maid, Dora, and grew up with her daughter, Regina. While Gloria gave him everything he wanted, she raised him the way her own parents raised her, and thus became an absentee mother who was never there when he needed her most. Dandy is a descendant of wealthy Edward Philippe Mott, who was described as a “mentally disturbed introvert”. Due to genetic disorders, it became apparent that madness always ran in the Mott family. The family line ended when Dandy Mott died in Florida in early 1953.[2]

Dandy was physically beautiful but this was in no way reflected by his personality. He was emotionally and psychologically disturbed. After having every whim catered by his mother, Dandy became a spoiled man-child. He enjoyed children's toys and playing dress up but should his desires not be met, he tended toward tantrums and harming small animals. He still would pretend in his luxurious recreation room and had no aspirations to fall in love and start a family as he considered the women presented to him to be "cows" and babies to be "boring". In his youth, he took pleasure in killing small animals, which was a tell-tale sign of his psychopathy, along with the numerous murders he committed in his adult life. His psychopathic traits were often stimulated by boredom. He considered himself superior to others in his community and fancied himself a living "God," above the law and above society in general. He used his family's status and wealth to manipulate the authorities to look away from his atrocious behavior and vile actions. He was likely in his mid to late twenties.

Dandy attended Elsa Mars's freak show with his mother Gloria as he waits in anticipation for the "freaks". After an introduction provided from bearded lady Ethel, he and his mother watch Elsa perform "Life on Mars", then the two offer to purchase Bette and Dot for $15,000. The twins decline the offer in which Gloria mocks Elsa's performance in return as the two exit the camp.[3]

At the Mott mansion, Dandy and Gloria have dinner in which Dandy flicks his fork to imply his boredom. He refuses to eat the dish he ordered, then fills his "nipple bottle" with cognac. Gloria suggests a female companion but Dandy says he just wants to be an actor. She disagrees and he runs off. The maid tells Gloria she found remains of the neighbor's cat, implying Dandy is the culprit, but Gloria won't believe it.[4]

While driving down a road Gloria comes across a clown, Twisty, and she decides this might be the thing to cheer up Dandy. This is when Dandy and Twisty first come in contact. Twisty catches Dandy going through Twisty's belongings and knocks him down with a juggling pin. He then leaves, but Dandy tracks him down and finds out he's the one kidnapping and killing people in the town. He decides to assist. One of the girls tries to get away during the Edward Mordrake episode, and Jimmy Darling sees it. Dandy and Twisty decide to put on a show, knowing nothing of the legend. As Twisty fell victim to Edward Mordrake, Dandy ends up becoming the owner of his mask. The mask gives him enough power to kill the cook, which he failed to do before.[5]

Eventually, due to jealousy, Elsa sells the conjoined twins to Dandy but tells the troupe that they ran off. In order to find the twins, “Lobster Boy” goes to Dandy's house. Dandy had been trying to woo them, and it was working on Bette, but Dot was not as convinced. This was aggravated when Dandy broke into and read her diary. Jimmy figures out that Dandy is the other killer that was with Twisty by recognizing his voice, and convinces the twins to come back.

Regina Ross, the daughter of maid Dora Brown, comes to look for her mom who has not been in contact for awhile. Seeing as how she's dead, Dandy thinks they should kill her child too. Gloria is having issues with this, and eventually Dandy kills her. He gloats to the maid's child and starts to take a bath of blood that he got from the Tupperware Party Massacre. She says she's going to get the cops. Dandy, delusional with power and prestige, doesn't care. When she does come back, Dandy pays the cop she came back with to kill her and then has the cop working for him. He uses this to frame Jimmy Darling for the murders at the Tupperware Party.[6]

Elsa leaves the whole troupe behind to go to Hollywood after selling the Freak Show to Dandy. None of the carnies like him and think he's a spoiled prick. After Paul decides he's had enough of being ordered around by Dandy, he stands up to him and tells him off. Then the freaks decide to quit on Dandy, throwing him into a fit of rage.

Dandy then goes on a murderous rampage and kills the vast majority of the remaining troupe, except for Jimmy who was recovering elsewhere, the twins who he loved, and Desiree who had hidden well enough. The twins eventually drug Dandy, and he awakens in Houdini's water tank. Desiree scolds him for massacring the freaks before telling him he is the biggest freak of all. She then puts a pipe connected to a hose over the tank and Jimmy turns the water on. The tank slowly fills with water and Dandy drowns, as Jimmy, Desiree, and Bette and Dot watch.[7] 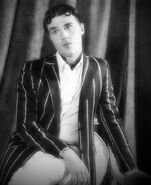 Retrieved from "https://americanhorrorstory.fandom.com/wiki/Dandy_Mott?oldid=150972"
Community content is available under CC-BY-SA unless otherwise noted.