Holden Vaughn
Denis Patrick Seamus O'Hare (born January 17, 1962) is an American actor who is part of the ensemble cast of American Horror Story.

Denis Patrick Seamus O'Hare was born on January 17th, 1962 in Kansas City, Missouri, USA. As a teenager, he was in his school's choir and in 1974 he went to his first audition, gaining a chorus part in a community theater production of Show Boat. In 1980 he left Detroit for Chicago to study theater at Northwestern University. He has become a renown theater actor and has received several awards for his work.

He portrayed Larry Harvey in the first season of American Horror Story, dubbed Murder House. He portrayed Spalding, a mute butler in Coven, con-artist Stanley in Freak Show and transgender bartender Liz Taylor in Hotel. In Roanoke he appears as actor William van Henderson, re-eancting Professor Elias Cunningham. For his roles in Murder House and Freak Show, he was nominated for the Primetime Emmy Award for Outstanding Supporting Actor in a Limited Series or Movie. 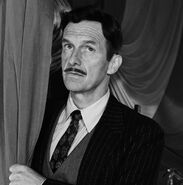 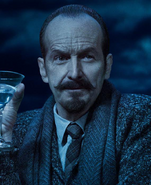