Don't Be Afraid of the Dark

Liza Johnson
"Don't Be Afraid of the Dark" is the second episode of Cult. It premiered on September 12, 2017.

As Ally's paranoia intensifies with the arrival of new neighbors and trouble at the restaurant, Oz finds a way to handle his fears with Winter's help.[1]

Ally encounters a clown in her bedroom and runs downstairs to Ivy, who arms herself with a knife. When the pair reaches the bedroom, there is no sign. Ivy searches the room, but even Ally is unsure about what she saw. As they embrace, Ally questions her grip on reality. Unbeknownst to them, the clown is in Oz's room. Oz hides from the invading clown and from Twisty, who chase him into the bathroom. His cries draw his mothers, who wake him from a night terror.

Kai's beating was caught on video by the new tenants filling the Changs' home, Harrison and Meadow Wilton. The incident was staged to propel Kai into the public eye so that he could run for City Council on Thom's now vacant seat. Ally's curiosity is piqued when she sees the movers unloading many large blue barrels into the garage and the husband is wearing a fully-encapsulating coverall with hood and respirator.

In the kitchen of The Butchery, Ivy is planning a night out, leading to a pressure between her kitchen manager and Pedro, a hispanic member of the kitchen staff. A flare-up is stopped by Ally, who does not want to inflame racial tensions in this political climate.

Winter and Oz are at odds, as he feels she represented him as a liar about the death of the Changs and his experiences, and she engages in the "pinky ritual" she did with Kai earlier to free him of his fear. In the aftermath, Winter takes him to meet the new neighbors. In a panic of the unknown, Ivy and Ally run to catch him, finding him completely happy and safe in their back yard. Initially afraid, they warm slightly to the brutally honest new neighbors, who practice beekeeping. Harrison excitedly talks about the hive, and how it operates to a fascinated Oz.

Meadow describes her cancer survival, and Harrison reveals that he is gay and they're in a lavender marriage. As they continue through the house, they see the bloody symbol showing through the paint on the inside of the front door.

When the family returns home, Ally and Ivy discuss their suspicions and doubts. Oz is afraid to sleep alone.  Ivy receives an alert on her phone that the security alarm at the restaurant has been triggered.  Ally volunteers to check it out. Inside she hears a suspicious noise and tracks it to the meat locker, where she finds the kitchen manager hanging from a meat hook.

The Mayfair-Richards household tightens up household security, installing steel bars on all of the windows and doors.  Ivy arrives with therapist Rudy Vincent in tow for a surprise house call. He contacted Ivy out of concern for Ally, who had missed several appointments.

She relates that Roger, the manager, was still alive when Ally found him but she accidentally killed him trying to help him. Pedro Morales, the cook, is Detective Samuels' prime suspect, given the altercation in the kitchen. Ally feels that her phobias have prepared her for the new climate of fear. She is offered a gun from Harrison's sizable firearms collection. Rudy is immediately concerned about her being armed in her current mental state.  She compels him to maintain doctor-patient confidentiality from Ivy. He does tell Ivy that he's concerned about Ally developing agoraphobia and that she should be monitored as often as possible.

A knock at the front door triggers Ally's anxiety, and she finds Kai on her porch. He's campaigning for City Council. When she denies him entry, he launches into an aggressive exposition on his platform based on security. She counters that she prefers to build bridges, rather than walls.  He mentions the irony of her newly-installed security precautions. She eventually slams the door in his intimidating face.

Pedro pleads his innocence to Ivy.

Winter is putting Oz to bed, and he wants to do the pinky ritual again. Winter declines, telling him if he's unsure if he's awake or dreaming, to just ask. She finds Ally contemplating her medication, and urges her to relax and runs a bath for her. While in the tub, Ally reluctantly accepts a sponge bath from Winter culminating in a seduction attempt, interrupted by a black out and the security alarm.  A clown appears in Oz's room. When an awake Oz asks if he's asleep, he is told that he is.

Harrison bangs on the window and tells Winter and Ally that the blackout is a coordinated terrorist attack, which prompts Winter to leave to protect and defend her home. Ally calls Ivy, who is trying to preserve their refrigerated meat. Mid-call, Ally's battery dies, so Ivy sends Pedro to the house with supplies. Ally realizes she is locked in the house with an invader, and she sees the ice cream truck that Oz described parking outside. In a panic, she finds that the backup battery in the security system has been removed. She collects the gun from where it's hidden and she wakes Oz and takes him to the kitchen with a plan to flee to the Wilton's house. Upon opening the door, she sees a figure outside and shoots out of reflex. Pedro falls dead at the doorstep.

Pedro Morales is one of The Butchery On Main employees since the opening of the restaurant. He has a good relationship with the owners, Ivy and Ally, but he does not get along with Roger, the sous chef, because of frustration based on prejudices. Because of these disputes, Pedro becomes the first suspect in Roger's murder. Because of the origins of his family, Pedro was often accused of being a clandestine immigrant, despite being born in San Diego, California.

Sent by Ivy to her house to bring some goods of first necessity to Ally during a blackout, Pedro was shot by Ally who mistook him for an assailant during one of her nervous breakdowns.

Roger was the sous chef of the Butchery On Main. He is not sympathetic towards his subjects and is quite unpleasant in his behavior. He has a particular dislike for kitchen worker Pedro Morales, based on racial prejudices. He was hanged to one of the hooks in the restaurant refrigerator along with the carcasses of the butcher's meat. Found by Ally, he is accidentally killed by her in an attempt to remove him from the hook. 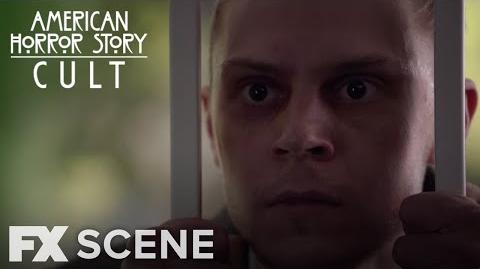 Retrieved from "https://americanhorrorstory.fandom.com/wiki/Don%27t_Be_Afraid_of_the_Dark?oldid=149069"
Community content is available under CC-BY-SA unless otherwise noted.