Doris Gardner is a pregnant woman who is trying to find the bright side on her new life in Provincetown. She is a character in Double Feature portrayed by Lily Rabe. 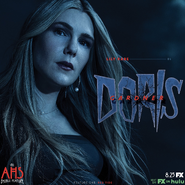