Angela Bassett
"Drink the Kool-Aid" is the ninth episode of Cult. It premiered on October 31, 2017.

Kai turns to historical cult leaders for direction. The women must choose what side of history they stand on.[1]

Kai narrates the histories of the Heaven's Gate, Branch Davidian, and People's Temple cults and their leaders (depicted in a documentary style to the audience), culminating in their tragic ends. He wants to draw a connection between the political movement and the cult. Some of the followers are reluctant, worried about mutilation, but not about giving their lives for the cause. Kai tells them that courage and loyalty will be required for the next step.

Kai proposes "regulation" of what websites the citizenry should be able to access (all passed through Kai's private internet service), a motion which passes through the council under protest. He also declares he is going to run for United States Senate the following year. The followers have begun calling Kai "Divine Ruler".

Ally asks Ivy for answers on why she joined the cult. Ivy responds that she felt out of control, and wanted someone else to make decisions for her. She also admits that at the time she felt like she hated Ally. Ivy has come to see the truth of Kai's rule but stopped her exit when Ally joined. Ally says that she had no choice: she had to join to extract her family. Winter arrives with Oz, who reluctantly hugs Ally. Ally tries to reassure him that she's not going to leave him again and that things will soon be back to normal. She even got him a Twisty comic book, which she sends him upstairs to read.

Winter apologizes for her actions against Ally, and she came to understand that Kai doesn't care for anyone but himself. Winter says that they need to pack lightly and leave immediately. Before they can, a cadre of followers escorts them all to an emergency meeting.

The women await Kai in the inner sanctum, but Beverly arrives and attacks Winter. Kai calls for an end to the infighting. He retrieves a pot of liquid, serving each woman a ladleful of Kool-Aid as Beverly explains who Jim Jones is. He explains they are to kill their mortal bodies and return immortal for the Senatorial run. All the followers, including the men, take a cup. When Kai points to each, they are to drink. Pus Bucket refuses to drink at his turn and is shot by Gary for disobedience. The women drink when bidden, as do all the men in turn, including Kai. It was a test of loyalty, and there is no toxin in the drink. Dead people can't vote, after all...

Ivy and Ally pack, without looking like they're packing. Ivy asks about Winter, angering Ally. They will pick up Oz from school in an hour and will not look back. Oz is missing from the school, picked up early by an escorted Winter. Kai entertains Oz with games in the inner sanctum. Kai tries to turn Oz by being a paternal figure, explaining that women can't be full role models. Kai initiates the pinky-power ritual.

The women arrive just before Oz is to drink the Kool-Aid. Oz says he wants to stay with "daddy". Kai insists that he is likely the donor who sired him. Ally wishes to leave anyway, and Ivy says it is OK for Oz to stay the night. Ally tells Oz to behave himself, and they leave before a major scene can ensue. Outside the house, Ivy insists they just saved the lives of all three of them, as even in Kai's care Oz has a chance to live; Otherwise, Kai would have killed them all.

Ivy has the donor information, and it does not contradict that it could be Kai. Ally assures her that Ivy was right, and she has a plan. Ivy says that the only play is murder. Ally agrees and serves pasta and a special wine saved for an occasion. Tonight they start over, Ivy says. Ivy begins eating and notes that Ally is not. Ally serves herself, describing her time in the psych ward, alone without visits from  Ivy or Oz. Ally continues, saying that she chose revenge against Ivy to fill the void left from her healed fears. Ivy scoffs that Ally's not cured, though this is the woman she's always wanted that it's a phase before returning to cowardly ways and that she's not afraid of her. As Ivy stands, she realizes she's been poisoned. Ally put arsenic in the food and wine and intends to bypass Ivy to get Oz back. Ivy dies wretching and screaming on the floor.

Kai narrates that Jim Jones' story did not end with the suicide and that Jesus descended to resurrect Jones with a kiss, who in turn resurrected the rest of the followers. Oz calls Kai out and reads the Wikipedia entry aloud. Kai calls Wikipedia "fake news", and that Kai is the ultimate truth. Oz continues to question Kai, saying that it makes no sense. Kai destroys Oz's phone in a rage. "Doubters get no cookies", he says, sending Oz to time-out. Ally arrives the next morning to pick up Oz, but Kai left with him already. Ally tells the guard to relay a dinner invitation to Kai.

At the fertility clinic, Ally begs for (and receives) proof that Kai is not the father. Ally begs another favor.

Kai arrives for dinner. They discuss Kai as a role model and Oz's behavior. Kai digs into his sloppy joe, asking after Ivy. Ally tells him that she poisoned her and that she's in the trunk. Kai asks how it felt to watch her die. Ally produces Kai's donor file from the clinic. She calls it divine intervention and Kai says he spoke the concept into existence. She says that their son is destined for greatness, like his father. Together, they bear Ivy to the Anderson family "crypt", leaving her on the floor as "the bed is for family", like Rudy. Kai, Ally and Oz embrace, now a "real family".

Marshall Applewhite is a guest starring character in American Horror Story portrayed by Evan Peters. Marshall was a cult leader who made the Heaven's Gate Cult. He poisoned himself and the other followers believing they would become aliens.

David Koresh is a guest starring character in American Horror Story portrayed by Evan Peters. David was a cult leader who made the Branch Davidians Cult. He shot and burned himself and his followers.

Jim Jones is a guest starring character in American Horror Story portrayed by Evan Peters. Jim was the leader of the Peoples Temple Cult and he poisoned himself and his followers. His afterlife was spent with Jesus.

According to Kai Anderson, Jesus descended from heaven to save Jim Jones from death after the mass suicide of his cult and gave him a high-five. This retelling was immediately and easily disproven by Oz Mayfair-Richards by reading the real outcome of the mass suicide on Wikipedia.

Moreover, the Jesus who appears in the on-screen depicted story told by Kai is an obvious representation of a lie, with Jesus descending from the sky with metallic cables along with angels dressed in theater costumes. 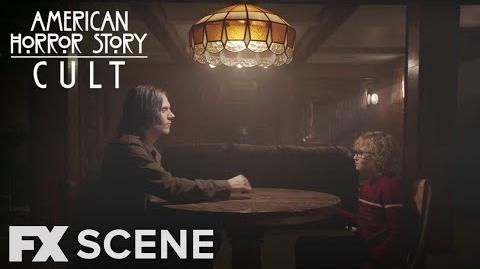 Retrieved from "https://americanhorrorstory.fandom.com/wiki/Drink_the_Kool-Aid?oldid=149484"
Community content is available under CC-BY-SA unless otherwise noted.