"Drive In" is the third episode of American Horror Stories. It was released in streaming on Thursday July 22, 2021 on FX on Hulu.

A screening of a forbidden film has disastrous consequences.[1]

A couple, Chad and Kelley, makes out on a bed while Bob Ross plays in the background. Kelly is not comfortable with taking the next sexual step after six months of dating. She leaves after he gets frustrated about moving too slowly. Discussing it later with his friends at a skate park, Chad claims that the Bob Ross was meant to provoke an ASMR response to get Kelley in the proper frame of mind. His friend counter-suggests that sparking fear will be more effective; but Chad laments that horror now is lame. The local drive-in will be playing a "cursed" film, "Rabbit Rabbit", which allegedly prompted patrons to kill each other. Chad's friends offer a free ticket to him for a limited showing of a rare print of the film.

Later in his room, Chad watches a video clip of Tipper Gore's 1986 Congressional hearing testimony regarding "Rabbit Rabbit". In it the director, Larry Bitterman, says that he was promoting the film with shocking media. Gore counters that the studio informed her it would be destroying all copies of the film print, prompting Bitterman to attack her.

Kelley discusses her reluctance to have sex with her friend, Dee. Dee thinks Kelley is afraid, but she says she is not. Chad approaches, apologizing for pressuring her. He invites her to the drive-in the next night.

When the screening approaches, cars begin to fill the drive-in theater. Ruth, a protester who swears she was there in 1986, tries to drive cars away. Drive-in workers Tillis and Verna debate sending the protester away, but Verna says to hold off. She is more concerned that the film print hasn't been delivered. The theater's financial future depends on the success of the screening. Chad and Kelley arrive and park, then walk to get concessions. They find Milo and Quinn, excited about the screening (and noting that an encore screening is scheduled for the next day elsewhere). Chad explains that the title of the film is an old British superstition, and that saying it at the beginning of the month brings good luck. Spotting Dee, Kelley peels off to get snacks. Ruth calls Chad over to plead with him to sabotage the screening. She claims that her boyfriend ripped out her eye (with his teeth) and swallowed it during the last screening of the film. Ruth continues screaming at him as he walks away, insisting that the chaos will start as soon as the film does.

In the projection room, the hooded delivery driver has instructions from the print's owner on how the film is to be projected. Verna scoffs that she knows what she's doing.

Cuddling together in the car, Kelley reminds Chad that tonight is their six month anniversary and that she wants it to be special. In their own car, Milo and Dee are on a date. Dee is very forward, with his head quickly in Milo's lap. Alone in his car parked between the two couples, Quinn looks to each and feels left out.

Dee looks up at the screen briefly and seems to react, as does Kelley. Verna and most of the other patrons become captivated by the onscreen imagery. Their eyes become bloodshot and change rapidly. Chad hears strange noises coming from another car, and seeing the car rocking dismisses it as intimate action.

Meanwhile, Ruth has managed to sneak into the projection booth. About to pull the plug on the projector, she is stopped by Tillis. Verna turns, her eyes fully black and her face and body ravaged by strange colored veins. Verna charges Ruth to the ground, gabs a pair of scissors from a nearby table, and impales Ruth's remaining eye with them.

Dee has had a similar transformation and bites off chunks of Milo's genitals. Dee spits them to the floor and attacks Milo. Another patron has broken into Chad's car and menaces the couple in the back seat. Kelley jumps into the driver's seat and quickly takes off, dropping the invader to the ground as the car moves. She clips other cars in a frenzy, and hits other transformed patrons as she looks for the exit. She recognizes the one stuck on the hood as a transformed Dee. Dee smashes against the windshield, shattering it. Unable to see, Kelley collides with the concession building and crushes Dee. Chad and a dazed Kelley escape into the building on foot, pursued by the transformed.

Locking themselves inside the projection room, they find Tillis completely dismembered and Ruth disemboweled. Kelley claims their faces were chewed off. The couple notes that neither have their phones, and Chad finds the landline is dead. He looks outside to see the crazed movie-goers mauling each other and flipping cars to get into them. Verna emerges to attack Kelley, and Chad defends her by beating in her head with a film reel. Finally, he pulls the reel from the projector and collapses.

A few hours later, smoke is rising from some cars as Chad wakes. Kelley notes that some of the remaining transformed ran off, but that more carnage is possible if they go out to retrieve their phones. They decide that the police will be of no help. She offers to use the shotgun she found behind the desk to "cancel" the next screening. Chad is inspired to intercept the second print from wherever the delivery service picked it up. He arms himself with the scissors embedded in Ruth's head, and they make their way out. Dee is dead on the hood of Chad's car, but Quinn walks up slowly behind the pair. Despite Chad's pleas, Quinn attacks him and Chad is forced to fatally stab his friend.

They find a truck and drive it to the source of the film, a trailer parked alongside a Rolls-Royce. Inside the trailer, Larry Bitterman argues with the television showing news coverage of the incident at the drive-in. When the pair confronts him, he claims not to know what they're talking about. He swears that the 4chan post about the second screening is misinformed, and that there is no additional print copy. He wonders why the two were unaffected by what was on the screen, and assumes they were distracted by having sex. He is ecstatic that the 100% response to the film's subliminal imagery had such a profound impact on the brain's fear center. He laments that The Exorcist only had two subliminal frames of a demon's face, and it had people vomiting and going into labor. He claims to have worked on that film and to have perfected the techniques with his own. He discovered his editor, Lanie, cutting off her own fingers during post-production. He knew audiences were ready for more, and held a special screening in one regional theater.

Furious that Tipper Gore thwarted him, he had been sentenced to 15 years in prison for his attack on her. He spent that time further researching and refining his personal workprint. He insists that the couple have been witnesses to history. Chad knows that the print projected the night before was not a workprint because there were no tape splices. Bitterman begs for his life's work as Chad burns the film reel on the stove. As the pair exit the burning trailer, he yells after that this is only the end of the first act and that their "horror film" isn't over yet.

Aroused by their victory, the pair return to Chad's room to finally have sex. On his computer, Netflix promotes its new trending release: "Rabbit Rabbit". Outside the window, parts of the Los Angeles skyline erupt into flame.

Dee is a character in American Horror Stories portrayed by Ben J. Pierce.

Verna is a character from American Horror Stories portrayed by Adrienne Barbeau.

Verna runs the Starlit Drive-In, and is responsible for the screening of the cursed film "Rabbit Rabbit." Verna ran the Kinotons at the Osiris on Broadway for 40 years. According to her, she threaded Tatum O'Neal's first and Joan Crawford's last. When Kubrick tried to lecture her on the aspect ratios for Clockwork orange, Verna told him to go fuck himself. 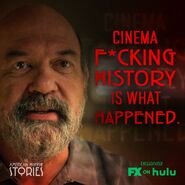