View source
This article is about the character. For the episodes, see Edward Mordrake: Part 1 and Part 2.

Edward Mordrake is a mysterious man with two faces. He is a character in Freak Show portrayed by Wes Bentley. He is determined to get revenge.[1]

Edward Mordrake was a 19th-century English nobleman born with a second face on the back of his head. While Mordrake himself was handsome and poised, the face opposite to his own was malformed, hideous, and deranged, and would whisper depraved notions that only Mordrake could hear, as though its own separate entity. Despite Mordrake having possessed many talents and skills, the second face eventually drove him insane, and he was committed to Bedlam Asylum. Eventually, he escaped his confines and joined a freak show troupe, feeling it would be the only place where he could live a life free from the world's hatred. However, during the events of one Halloween night, he was driven by the face to kill his entire coterie before killing himself.

The carnies have a superstition that any performance on Halloween, even trivial ones, risk summoning Mordrake. Once he appears, an ominous thunderstorm brews on the night horizon, casting streaks of unnatural lightning in the sky, while a thick, bright green fog swirls wherever he treads. The whisperings of his second face can be vaguely heard telling him what it desires: the life of one of the carnies.

Mordrake is summoned to Fräulein Elsa's Cabinet of Curiosities on Halloween 1952 while the freaks are encamped in Jupiter. Despite superstitious warnings by the carnies of Mordrake's legend, Elsa Mars demanded that they rehearse her musical number, conned by a false prophesy that a dark-haired man will revive her career. Mordrake himself walked into the performance tent to watch Elsa's rehearsal, and Elsa believed him to be the man from the prophecy, but he left before she was finished. He materialized inside the trailer of Ethel Darling, and bid her to tell her tale. Much moved, he was sympathetic to Ethel's plight. Though Ethel was convinced that she was to be the one taken, as the legend demanded, the second face whispered, "Not the one," and she was spared.[2]

Mordrake interrogated Suzi and Paul. Suzi is spared because her accidental murder is what inspired her to perform and make herself a better living, while Paul's notion that he could have been successful with his handsome face and a normal body is sympathized by Mordrake, and he too is spared. Pepper and Salty are innocent, and he spares them. He goes to Elsa, who believes him to be a talent scout. He is unmoved by Elsa's story and intends to take her when he hears Dandy and Twisty's show nearby and compels Twisty to tell his story, which makes the second face weep. Mordrake kills Twisty and invites his spirit to join his ghostly troupe, which he happily accepts.[3]

He was ultimately summoned by Elsa Mars on her last appearing on Halloween's night. He, accompanied by Twisty and a tall man who joined them, confronts her on stage. He stabs her, but she is spared and sent to "heaven" as Elsa's place was not with them.[4]

Mordrake is a powerful spiritual entity with a variety of supernatural abilities. Alongside The Butcher, he could be considered one of the most powerful ghosts in the American Horror Story universe. 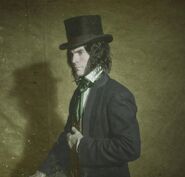