With the horrors of the night behind them the survivors deal with the fallout of their choices.[1]

A family struggles to gain some sleep in their motel room due to blaring music coming from one of the motel residents. The mother decides to confront the noise and knocks on the door, which is opened by Richard Ramirez, who engages in a very short conversation with the mother before inviting her in. She refuses and Ramirez suddenly grabs her, trying to pull her into the room however Richter intervenes insisting that he release her. Ramirez does so and the two begin to argue as Richter admits he can't stand Ramirez killing anymore and he wants to move past it. Ramirez tells Richter that breaking his deal with Satan will result in dire consequences.

Richter continues to accompany Ramirez during his killing sprees. One day in the morning, Ramirez goes into a store to buy a beverage while Richter waits for him and a newspaper catches Richter's eye featuring a picture of Ramirez. Richter decides to purchase the newspaper and gives it to an elderly woman who then recognizes Ramirez when he exists the store. The residents chase down Ramirez and beat him.

A photographer, Dustin, visits Camp Redwood with his girlfriend. He spots Montana sunbathing on the dock, apologizes for disturbing her and Montana soon begins to seduce him. He tries to avoid her advances but ultimately gives in and Montana stabs him multiple times. Helen, Midge and Eddie are disgusted with Montana and they fail to understand why she enjoys killing so much but Xavier comes by and praises her and the two share a kiss.

Margaret Booth has become a wealthy real-estate agent who purchases properties with dark histories, such as Briarcliff Manor. Margaret is now married to Trevor, who survived the attack but is miserable with his new wife. In the past, Margaret visits Trevor who awakens from a coma in the hospital and remembers that Margaret had tried to kill him but has decided against calling the cops. Instead, he tries to blackmail her to gain her wealth however Margaret states that she will marry him so Trevor can't testify against her. In the present, Margaret's personal assistant, Courtney, walks in and relays information that Brooke has lost her last appeal- She is set to be executed.

In San Quentin State prison, Brooke is accompanied by guards on her way to a cell. Ramirez spots her and states he should have killed her that night, saving her the trouble. Brooke retaliates back as she continues to be escorted down the hallway.

Montana and Xavier rummage through Dustin's belongings on his campsite. Ray confronts Montana over her murder sprees after finding Dustin's body on the dock but Xavier defends Montana by explaining that doing good had brought him nothing. Montana ends up finding a newspaper with Brooke's story on the cover page and Ray is in disbelief after reading that Brooke will be executed. Dustin's girlfriend calls out for her boyfriend as she walks towards the campsite. Ray runs up to her and tries to explain that he found her newspaper, telling her he's friends with Brooke but Dustin's girlfriend is confused Xavier kills her by slashing her throat. Ray yells at him and states that he is done with them.

In her cell, Ramirez contacts Brooke in a manifested form and asks if she's willing to accept Satan, who would protect her from death. Brooke refuses and Ramirez disappears.

Margaret is hard at work and is frustrated to hear that a deal has fallen through. Courtney shows her a newspaper that has Camp Redwood on the front cover and the story contains details of a recent murder that has happened. Courtney is worried that they could be sued, but Margaret believes this is a great opportunity for them.

In Alaska, Richter has created a new identity for himself and goes by the name of Donald. He has a wife, Lorraine, and a newborn son, Bobby and currently works at Videoshack and is up for a promotion.

Margaret holds a press conference at Camp Redwood in front of reporters. She explains that an event will be held that includes a music festival and many fun activities. Chet, who is filled with rage, watches from afar and is ready to attack Margaret but is stopped by Montana who tells him that he will have his chance later.

Richter and his wife watch the news and Margaret's event at Camp Redwood is the top story. Lorraine apologizes and goes to turn off the TV but Richter explains that he has moved past Camp Redwood.

Ramirez is visited by a young woman, whom he calls Red. She shows him a flyer of the Camp Redwood event and Billy Idol is one of the lead acts. She tells Ramirez that she plans to go and tape record Idol's music for him but Ramirez is frustrated that he will be forgotten in the next decade, like many of the music artists currently, and wishes to be immortal.

After Brooke is finished with her last meal, she is taken to be executed. Ramirez taunts her from his cell, claiming it's her last chance to sell her soul to Satan. Brooke is brought into the execution room and is watched through a glass screen by Margaret and Trevor- her last words are that she is innocent and tells Margaret that she will burn. Brooke is then strapped onto a contraption while a hooded person, donned in all black from head to toe, administers the lethal injection. Brooke passes away shortly after, leaving Margaret unsatisfied over the execution choice. During this time, Ramirez summons Satan, who possesses a guard in the bathroom and releases Ramirez from his cell.

Richter returns home from work and is devastated to find his wife has been murdered after being stabbed multiple times. He finds his son, Bobby, crying in his car seat. A note explains that Satan will have his vengeance. Richter takes Bobby to Lorraine's sister, Lizzie, who is confused but Richter tells her that Lorraine is dead and leaves Bobby under her care.

Brooke is wheeled into the room by the executioner, who then administers adrenaline and Brooke returns back to life. The hooded person removes their mask, revealing to be Donna.

Lorraine is a guest starring character in American Horror Story portrayed by Tanya Clarke. She was a former prostitute that moved to Alaska to start a new life. Lorraine marries Benjamin, now by the name of Donald. Lorraine enjoys her life with Benjamin and one night, she is watching the news with him and Camp Redwood comes on the screen. Lorraine goes to change the channel but Benjamin insists he watch it. Benjamin comes home from work one day and he finds out that Rameriez killed Lorraine.

Lizzie is a guest starring character in American Horror Story portrayed by Gail Rastorfer. Lizzie is Lorraine's sister and after Lorraine dies, Benjamin takes Bobby to Lizzie's house so he can go and kill Ramirez. Later on sometime, mentioned by Bobby, Lizzie dies.

Doreen Lioy is a guest starring character in American Horror Story portrayed by Yvonne Zima. Doreen was Richard's girlfriend and she visited him in prison and brought him a Camp Redwood flier.

Dustin is a guest starring character in American Horror Story portrayed by Eric Staves. Dustin was a photographer and birdwatcher. Montana seduces him and he agrees even though he has a girlfriend. They almost make out but Montana kills him right before leaving his dead body on the dock. 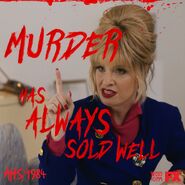 "A new definition of blood money."