Fiona's choices rattle a decades-long truce between the Salem witches and Marie Laveau. The Council of Witchcraft pays a surprise visit to the Academy with disturbing allegations.[1]

Henry, a young black boy biking through the streets of New Orleans, is accosted and then chased by three white men in a pick-up truck. The boy turns into an alley and the men chase him on foot. The alley ends with a locked gate, cornering the boy. Meanwhile, in Marie Laveau's salon Cornrow City, stylist Cora, Henry's mother, discusses sending her son to De La Salle School, a white school that recently has been integrated. While Marie and the other patrons disapprove, Cora says she has hope for the future and that things will get better for the blacks.

Her son is later found hanged from a tree, lynched by the white men. Marie watches the mother mourning over her boy's body and resolves to take revenge. That evening, Marie performs a ritual to summon an army of the undead, including black Union Civil War soldiers. The three white men who killed the boy are in hiding, rationalizing to each other that they were doing the right thing. The undead troops arrive in an ambush. They tear out the racists' innards and violently murder them in retaliation.

Spalding prepares a tea party for himself and his dolls. He is alerted about the noise downstairs and observes Fiona's murder of Madison. At Fiona's direction, he rolls up the rug with Madison's body inside and pours Fiona a drink. A crash of glass draws Fiona's attention to the greenhouse, where Queenie's tryst with The Minotaur went awry. Queenie has blood across her abdomen. Behind Fiona, the beast rises up.

Inside, Cordelia quickly prepares a healing treatment for Queenie while Cordelia and her mother bicker about her ill fated visit to Marie. Queenie asphyxiates and Fiona breathes life back into her, visibly weakening the Supreme. Fiona objects to taking Queenie to the hospital, saying that Cordelia's security incompetence will bring a visit from the Council.

In Fiona's room, Delphine informs her that Queenie saved her from the Minotaur even if it was just there for Delphine. Fiona tells her to keep that information to herself. Delphine asks what will happen if it comes back, but Fiona assures her that it wiil not return.

At Cornrow City, Marie is tending to the now retired Cora, who insists on paying for her services, but Marie tells her to keep her money and even gives her some from her own jar. At the same moment, her employee Chantal comes back with a large package, claiming that "some freak" dropped it off without a word. At Marie's request, Chantal opens the box and backs away calling Marie, who screams when she sees the bloody, blinking Minotaur's head.

Kyle is beating his head against the bathtub until Zoe tells him to stop. He responds "No Kyle," implying that he has understood her. Zoe prepares tuna salad and notices rat poison on the shelf, which she takes down. The tuna salad prepared, she returns to the bathroom, but Kyle has fled the house. Amidst the trick-or-treaters, she cannot find him.

While helping Fiona into her dress, Delphine talks about the old Halloween traditions, bonfires and harvest offerings.  Fiona tells her that the current versions of those are jack-o-lanterns and candy. Delphine notices that Fiona looks younger and more beautiful.

At Cornrow City, Chantal tries to stop Marie from starting a war with the witches, but Marie rationalizes that they started it when they decapitated Bastien. Chantal reminds her of the truce Marie and Anna Leigh Leighton brokered wherein they would stay in their own territories, but Marie says that if they do not retaliate, they will just be waiting for death.

In Baton Rouge, Hank is about to hang up the phone after talking with Cordelia, telling her his business partner "Phil Underwood" has arrived.  When he opens the door to his hotel room, it is instead Kaylee, the woman with whom he is having an affair. After vigorous sex, they discuss Halloween. Hank discloses he was "a monster" last year.

Cordelia is tending to Queenie. Delphine thanks Queenie for saving her life, and Queenie says she will have to work to pay her back. The Council on Witchcraft (Myrtle Snow, Quentin, and Cecily) pay a visit to Miss Robichaux's Academy. Cordelia clumsily lets slip about the Minotaur incident and her entering voodoo territory, necessitating Fiona's placating them. Nan reveals that she sent for the Council because Madison went silent in Nan's head. They are conducting an official inquiry. The death of a descendant of Salem is punishable by incineration. They interrogate Cordelia, Zoe, Queenie, and Nan. They ask, among other things, if she was manifesting new powers. Cordelia notices the rug is missing. They realize that Fiona was aware that Madison gained another power, and Myrtle suspects her of killing Madison for having the potential as the next Supreme.

Hank and Kaylee are cooking breakfast in the kitchenette. Hank told her he is a USDA inspector, which sends him all over the country. They met in an online community dedicated to collecting Thomas Kinkade paintings. She is falling for him, but he takes the opportunity to shoot her in the head with a suppressed pistol.

Myrtle is disappointed that Fiona has been shirking her responsibilities as Supreme for the last 40 years. Myrtle reminds her that Fiona was also the last to see Anna Leigh alive when she went missing shortly after she made the pact with Marie. A flashback revealed that after the death of Anna Leigh, Fiona lied to the Council and claimed she didn't know where she was. She also claimed that Anna Leigh believed her to be the next Supreme. The Council declared her to be the Supreme Elect. Myrtle, who could detect lies (being a "Guardian of Veracity in the Vernacular,") told Fiona she knew she was lying. Myrtle enchanted Spalding's tongue so it is incapable of telling a lie and arranged for him to be interrogated by the Council. However, they later find him in the bathroom with his tongue cut off, with Fiona suspiciously inside the bathroom with him.

Myrtle is convinced that Fiona is guilty and is itching to burn Fiona at the stake. Myrtle calls Spalding as a witness, and she directs him to write the name of the witch responsible for severing his tongue. Having overheard the young Myrtle discussing his tongue enchantment with a friend, he exploits a loophole in the enchantment, writing "Myrtle Snow" on the paper. He sends a note to Fiona, asking her to meet him in the bathroom. His last words were to Fiona, that he has always loved her and cuts his own tongue out so he cannot speak the truth against her.

In the present, Myrtle is furious that Fiona keeps getting away with murder. Fiona smugly looks on, and Cordelia interjects that she knows Madison could never have become the Supreme because she secretly had a heart murmur, thus lacking the "radiant health" a flowering Supreme would have to possess to drain the power of the reigning Supreme.

Chantal closes the salon for the night. Once again, Marie prepares the ritual and the dead rise from their graves.

Delphine is greeting trick-or-treaters, calling them "little beggar children." Nan crafts a shrine for Madison. Zoe and Queenie think it premature to think her dead, and they want to search for her, but Cordelia has forbidden them to go out. Elsewhere in the house, Spalding is keeping Madison's corpse as his own personal doll.

Fiona and Cordelia play a game in a bar where they ask each other three questions that should be truthfully answered. Cordelia asks why Fiona hates Hank as a son-in-law and Fiona says "he reeks of bullshit" and wonders why Cordelia does not feel the same. Cordelia asks Fiona if she really did murder Madison, and Fiona lies and says she did not. Cordelia, unconvinced, ponders the answer, but Fiona asks her who she thinks the next Supreme will be. Cordelia comments that Fiona is becoming obsessive. In the restroom, a cloaked figure throws corrosive acid on Cordelia's face.

Luke arrives, bearing cookies to repay Nan for the the cake she brought him.[2] He is not inside long before more seekers arrive at the door. Delphine takes a good look at the zombie trick-or-treaters and recognizes them not as made-up children, but as her own long-dead daughters, the smiling one in the middle being Marie Pauline, the daughter who seduced Bastien shortly before Delphine turned him into the Minotaur.[3] A look outside shows an army of the undead laying siege to the house. 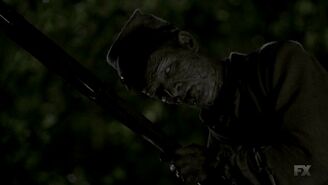 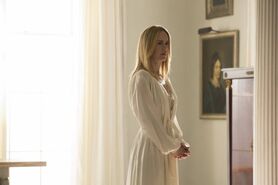 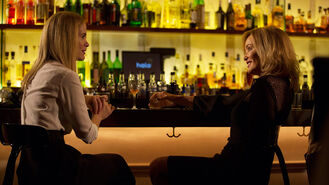 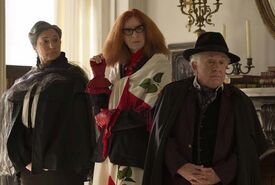 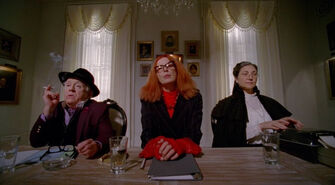 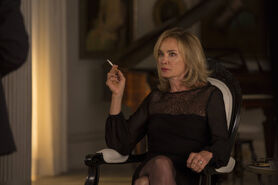 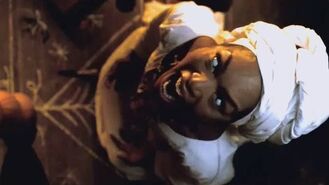 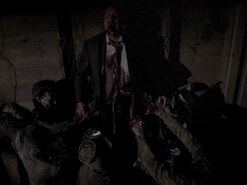 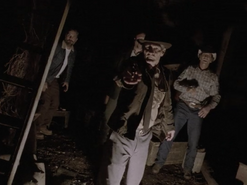 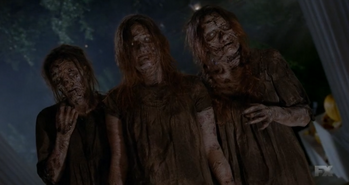