"Feral" is the sixth episode of American Horror Stories. It was released for streaming on Thursday August 12, 2021 on FX on Hulu.

A family goes on a camping trip unaware of what is lurking in the woods.[1]

Jay Gantz (a lawyer) takes a work call, much to his wife Addy's (a teacher) dismay. They're driving towards Kern Canyon National Park, and had agreed to put work aside. Jay wants for the three of them (including their three-year-old son, Jacob) to get out of their comfort zones and reconnect with nature. Addy is skeptical, and Jacob wants to watch TV. They approach the campsite, abutting the forest and a small pond. Jay deftly unpacks and starts setting up a tent and lights before night falls. Something watches from the cover of the trees once the sky gets dark. As they settle into the tent for sleep, they hear a howl and a figure casts a shadow on the tent wall.

The next morning, Jay and Jacob prepare to go fishing, and Jay gives Jacob a compass to keep safe. Jacob hides in and out of the trees, playing with Jay as the two walk towards the water. Addy emerges to see a pool and trail of blood that Jay missed. She follows the trail to find a deer's head and shoulders, ripped from the rest of the carcass and placed in a tree with the throat torn away. Jay loses track of Jacob as the son passes a tree. Addy catches up to Jay and they frantically search for the boy.

Ten years later, a wall full of maps, notes, and clues show that Jacob was not found that day. A banging on the door of a leased apartment wakes Jay from a stupor. A man introducing himself as Bob Birch says he has information about Jacob. As he doesn't look like a reporter or one of Jay's malicious neighbors (who think that Jay killed his son), Jay lets him in. Bob is a hunter who has placed camera traps deep in the park. By a recently placed camera trap, Bob found a Boy Scout compass, the same Jay left with Jacob. The trap captured an image of a young man from far away. Bob mentions that the park has become overrun with illegal marijuana farmers who are also tied to human trafficking. Bob wants ten thousand dollars to bribe a grower so the grower will tell them what he knows about the boy in the picture.

Jay approaches Addy, who thinks Bob is scamming Jay. She won't even look at the photo, because she thinks her heart will be broken again. She can't teach and is living out of boxes. She has given up hope that Jacob is alive, and says she will not fund him.

Nonetheless, the couple follow Bob to the grower's camp. It's ten miles off the trail and they need to hurry before dark. As they walk, Jay asks what Addy's boyfriend thinks of the newest lead since they haven't spoken in a year. Addy admits that she broke up with her boyfriend because he wanted to start a family with her, and she believed that opportunity had passed. Though they divorced long before, Addy never blamed Jay for the breakup. Bob intervenes on their argument and tells them to move forward quickly. They trudge on, observed by a feral humanoid creature from behind a tree.

Bob detours the group to a ranger station. He warns that the resident is not a ranger, but a weird crazy man. Bob advises that they should avoid conversation. Stan Vogel approaches Addy, who is filling their water stores. Bob tries to bluff that they are on a sightseeing trip, but Stan recognizes the couple from news coverage about Jacob's disappearance. Stan warns the party that besides the growers, dangerous things lurk in the forest. Stan relays his own account of the night Jacob disappeared, which includes a large creature carrying Jacob. Legally, though, he says he can't admit that.

Resuming the trek to the growers' camp, Bob reiterates his opinion of Stan's ill mental health. Addy reminds the men of the strange occurrences, like the deer, which Bob angrily scoffs at. Jay defends Addy and the tense moment passes. They approach the grower's camp, and find it full of bloody and eviscerated human corpses. Bob admits that he conned the pair, and that he had no idea where Jacob was. He made a deal with the growers to bring them cash (and the pair's other possessions and assets), and fabricated the picture and compass. Bob is on the verge of killing the parents himself, when a "corpse" near him arises and bites into Bob's neck. Gun in hand, Bob shoots Jay as the other "corpses" also begin to move. Jay and Addy escape with a pistol as night falls.

Meanwhile, Stan heard a disturbing noise inside the station and armed himself to investigate. He sees Addy approach the station carrying the wounded Jay. They bring him inside the station for medical aid. The gunshot went through Jay, and Addy relays what happened to them. Stan insists that "the rules" do not allow him to tell them the truth about what is outside coming for them, though he relents when Jay aims the pistol at him.

Stan says it is neither Bigfoot nor the Australian "yowie". The United States National Park System was created, he says, to keep the general public from being eaten by the "Feral Nation": a subpopulation of cannibalistic and inbred humans living wild in pockets of each National Park. Their origins are unclear, and perhaps as old as the earliest settlements of the continent. Stan believes that the frequent disappearances in the parks are covered up because the parks themselves generate vast tourism revenue. Stan suggests the two think back to Jacob's search party and recall anything odd. Addy remembers a group of Army Rangers, allegedly attached to the search via the California National Guard. The soldiers went into the woods and didn't come back out; Stan says that such units are sent in to cull the feral population in sweeps. He says that the ferals that took Jacob didn't survive the day. He doesn't know what happened to Jacob, nor what has the feral anxious now. He does intend to radio for backup and report that the ferals are out of their containment zone.

The pair reconcile while Stan calls in to deliver his report, but before he can finish he is tackled by a feral that was crouched in a corner of the ceiling. More ferals crash through the station windows and menace the couple. The feral attacking Stan corrals him back into the main room with the others, where Stan trips and falls to the ground. The ferals quickly set upon him and tear him apart, eating his organs. Jay and Addy escape, but are soon surrounded in the woods. They look up to see a skeletal throne, on which sits a boy with a crown of thorns. The compass still hands from Jacob's neck.

Hoping for a reprieve from their son, he greets them with a "Boo", as if he's been playing a 10 year game of Hide and Seek. A feral elder approaches and asks in their language "Who are these people?". Jacob responds to him "Dinner." His parents are quickly torn apart, and he tastes a drop of blood that has landed on his cheek.

Jacob Gantz is a character in American Horror Stories portrayed by Colin Tandberg and Ledger Fuller.

Bob Birch is a character in American Horror Stories portrayed by Blake Shields.

"What lurks among the trees?" 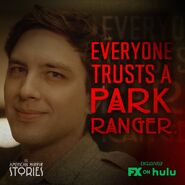 "It's not the rangers we're worried about..."