Lamenting the state of society, Mutt and Jeff set their sights on a "brighter" future. An emboldened Michael plummets the Coven into their darkest hour, forcing them to gamble their hopes on the abilities of one witch.[2]

Jeff is sick and tired of how the world is. He just wants it all to end and for them to start over -- and do it right this time. Miss Venable arrives and reminds them of their meeting with The Cooperative. She uses this time to ask Mutt and Jeff if she can have a bigger role in the company. They shoot her down and so she quits on the spot. After she leaves, Jeff tells Mutt that Miss Venable just gave him an idea.

In New Orleans, Mallory is trying to revive a dead bird but is having trouble doing so. Cordelia and Myrtle tell her that she's trying too hard. Mallory is concerned about Michael. Cordelia reassures her and tells her not to worry that she put a protection spell around the house. Downstairs, Zoe and Queenie are trying to teach protection spells to the other girls. Outside, Dinah performs a ritual and negates the spell. Michael and Mead emerge from the shadows and enter the house. The witches are surprised by the arrival of Micheal, and Zoe and Queenie try to attack him telekinetically with glass shards and nails on the table, but he is strong enough to counter Zoe and Queenie's attack and uses the glass shards and nails to kill several student witches, including Bubbles. Then Mead comes in and unscrews her own arm, which concealed a bionic shotgun, shooting Zoe who just wants to stand up and others witches. Queenie takes the opportunity to pick up the glass pieces on the table, and slits her own throat to transfer damage to Mead, but she doesn't expect that Mead is now a android and the damage is too small for her. Mead keeps shooting Queenie and other alive witches. The three in the upstairs notice the arrival of Micheal, and Mallory wants to confront Michael but Cordelia knows she isn't ready. Michael and Dinah settle matters between them. Dinah gets paid by having her talk show greenlit for thirteen episodes, and then she see the witches' bodies and look guilty. He and Mead head upstairs where he plans to take out Cordelia. But as they open the door, she escapes and can't be found. Michael is very upset.

At Miriam's home, Michael is furious because they failed. Miriam reminds him that his destiny is to end the world with a reign of fire. She tells him that maybe they should change their plan. In reality, Jeff and Mutt are the ones pulling Miriam's strings back at the lab. Jeff is trying to convince Michael to end the world. Miriam reminds him that if he does bring on the apocalypse, he'll end the witches too. She tells him to think bigger. Michael suggests that he runs for President. He'd start out as ambassador and get close to the current president. Miriam asks him if he got this idea from the movie The Omen 3. Michael says yes but only because there isn't a lot of reference material on how to be the antichrist. Jeff passes over the reigns to Mutt who suggest through Miriam that Michael return to their lab and ask them for help. Michael reluctantly agrees.

In Misty's shack, the remaining witches hide from Michael. Cordelia astral projects herself back to the house to see the destruction. She finds Zoe and Queenie's bodies. She breathes on them but they disappear. She reawakens back at the shack surrounded by Myrtle, Coco, Madison, and Mallory. She tells them that she couldn't feel their souls so she couldn't bring them back. Madison tells them what happened at Murder House and how Michael can erase their soul. Cordelia slaps her angry that Madison hadn't told her this sooner. The two quarrels but is stopped by Myrtle. Cordelia begins to cry begging that there must be something they can do. Myrtle replies that maybe there is as she looks at Mallory.

Myrtle explains that Mallory has the power to travel through time and she can go back and warn them. Myrtle says that the catch is that there is no documentation of another witch having done this and that most who tried died. Mallory agrees to do it. Cordelia fills up a bathtub with water while Myrtle tells Mallory about Anastasia Romanov and how she tried to save her family with a protection spell. They have to do a dry run and test Mallory's power so they are sending her back to save Anastasia. Mallory steps into the tub and Mrytle begins to chant a spell. The water turns black and Cordelia pushes Mallory into it.

Mallory appears beside Anastasia and helps her to create a shield between her family and the soldiers. It works but when Mallory lets go of her hands the shield disappears. Mallory is pulled back to the present and screams as she returns. She crawls out of the tub and Cordelia holds her close. Her face is dripping with blood that is running out of her eyes and nose. Later, Cordelia talks to Myrtle and tells her that Mallory will never be ready while Cordelia is still alive. Myrtle tells her that they aren't ready to lose her yet. Cordelia asks Myrtle if she'd tell her if she became like her mother. Myrtle tells her that she could never be her mother. Cordelia says that they should perform The Sacred Taking to give Mallory all of her powers. Myrtle rebuffs, telling her that the coven still needs her. They just need to buy some time.

Cordelia and Myrtle go to the Hawthorne School for Exceptional Young Men to talk to John Henry and Behold Chablis. When they arrive, they find that the school is empty. They walk into the sitting room and find an inverted pentagram made out of the bodies of the students along with John Henry and Behold, all dismembered.

Ms. Venable is packing up her things when Jeff and Mutt stop her. They tell her about the end of the world and the Cooperative, and how they're going to build outposts so that the right people can ride it out. They invite her to be the administrator of the Outposts.

Michael is nervous before meeting the Cooperative. Miriam reassurances him. She tells him that it's time for him to do what he was put on this Earth to do: destroy it. He enters the meeting with the Cooperative and tells them about his plan to bring about the apocalypse. He also tells them about the luxury outposts he'll be creating so that their families will be safe. They begin studying the guide on how to construct an outpost.

Anastasia Nikolaevna Romanova was the Grand Duchess of the Russian Empire. She is a character in Apocalypse portrayed by Emilia Ares. Anastasia was awoken one night when her father and other men were talking loudly. Her and her family were taken down to the basement where Mallory (using Tempus Infinituum) tried to save her but did not succed and she died in another way.

Anastasia was a natural born witch and is shown to have mastered one of the Seven Wonders.

Nikolai Alexandrovich Romanov (as known as Nikolai II) was the last Tzar of Russia. He is a character in Apocalypse portrayed by Mark Ivanir. Nikolai was talking to some russian soldiers one night when his daughter comes and asked what was going on and he told her to get the family and head down to the basement. Anastasia tried to prevent them from being killed with spellcraft but it did not work and him and his family were gunned down. 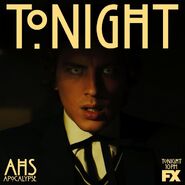 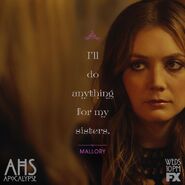 "The fate of the coven rests in Mallory's hands." 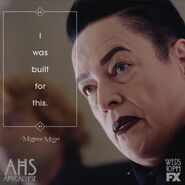 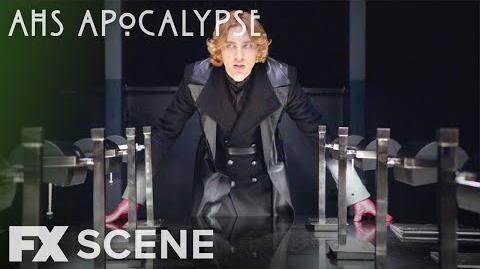