For her roles in Murder House and Coven, she was nominated for the Primetime Emmy Award for Outstanding Supporting Actress in a Miniseries or a Movie.

Conroy was born in Monroe, Georgia, the daughter of Ossie Hardman (née Ray) and Vincent Paul Conroy. Her father, who was of Irish descent, was a business executive and her mother also worked in business. During the 1971–72 school year she was a student at Dickinson College in Carlisle, Pennsylvania, where she was a member of the Mermaid Players and appeared in college theatrical productions. She moved to New York City to study drama at the Neighborhood Playhouse and the Juilliard School. She was a member of Juilliard's Drama Division Group 6 (1973–1977) which also included Kevin Conroy, Kelsey Grammer, Harriet Sansom Harris, and Robin Williams.

During the 1970s, Conroy performed regularly with regional and touring theatrical companies, most notably "The Acting Company", and appeared as "Desdemona" in a production of Othello (with Richard Dreyfuss and Raul Julia) at the Delacorte Theatre. One of her first film appearances was as a Shakespearean actress in Woody Allen's, Manhattan (1979). She made a very well-received Broadway debut in 1980, acting in Edward Albee's The Lady From Dubuque.

In 1992, Conroy became friends with playwright Arthur Miller, leading to her involvement in many of his productions on both stage and screen. During this time, she appeared on television, mini-series, and made-for-TV movies, where she met and married fellow actor Jan Munroe.

She is best known for her role as "Ruth Fisher" on Six Feet Under, which earned her a Golden Globe and Screen Actors Guild Award.

Along with many guest appearances on television in the mid-2000s, Conroy was cast in a recurring role on How I Met Your Mother, as Barney Stinson's mother Loretta Stinson.

In 2019, Conroy co-starred in the film Joker (with Joaquin Phoenix and Robert De Niro) an origin story film of the Batman supervillain The Joker. Conroy portrayed the title character's mother Penny Fleck, a role for which she was recommended for an Academy Award for Best Supporting Actress.

In 2011, she was cast in a new drama series for FX entitled American Horror Story: Murder House. Conroy was one of two actresses, the other being Alexandra Breckenridge, playing the housekeeper and maid named Moira O'Hara of the Murder House. When the season came to an end in 2011, it was announced that the show was intended to be an anthology series, in which each season would be completely different with new characters each season. During this time, Conroy was nominated for a fifth Primetime Emmy Award for the Outstanding Supporting Actress in a Miniseries or a Movie category.

For the second season, subtitled Asylum, Conroy re-joined the cast playing The Angel of Death in a multi-episode arc. And in 2013, Conroy once again was cast in the third season, Coven, this time part of the main cast, playing Myrtle Snow, a member of the Witches Council in New Orleans, Louisiana as well as Fiona Goode's rival. She was subsequently nominated for a sixth Primetime Emmy Award for Outstanding Supporting Actress in a Miniseries or a Movie. Conroy was also in the fourth season entitled Freak Show, as Gloria Mott, again in the main cast, a wealthy woman whose son wishes to join the titular troupe. Hotel marks Conroy's first absence from the show, but she later returned in the sixth season of the series; Roanoke, in a special guest capacity, as the cruel matriarch of the Polk family, Mama Polk, in the re-enactment half of the season. In the seventh season of the series, Cult, Conroy appears once again as a special guest star, as Bebe Babbitt, a sinister extremist lurking in the shadows of cult leaders. She returned to the eighth season of the series, entitled Apocalypse, reprising her roles as Myrtle Snow from Coven as well as Moira O'Hara from Murder House. Despite being credited as a special guest star, Conroy played a notable role. Conroy was absent from 1984, her second absence in the series. In February 2021, Ryan Murphy confirmed on Instagram that Conroy would return to the series in an unspecified role in Double Feature. Conroy's character was the first character of the season to be revealed. A shot of Conroy in character was shown in an FX Hulu trailer which contained a mini-teaser for the American Horror Story spinoff series American Horror Stories. In 2021, Conroy indeed returned to the main cast for the first time since 2014, portraying successful novelist Belle Noir; the "living embodiment of a cautionary tale". 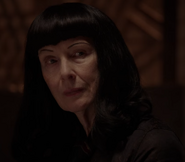 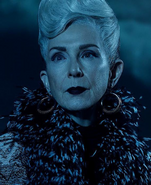