Liz Friedlander
"Game Over" is the seventh, and final, episode of the first season of American Horror Stories. It was released for streaming on Thursday August 19, 2021 on FX on Hulu.

A couple dares to spend the night in one of the most infamous haunted houses.[1]

An Uber pulls up to the Murder House, and the passenger couple (Dylan and Connie) emerges excited to visit. As haunted house fans, they are touring several (including the LaLaurie Mansion). They've rented out the "most haunted house in the United States" for the evening, they tell their concerned driver. He offers to take them to a hotel instead. Connie retorts "like the Hotel Cortez?", but follows up with their plan for their stay in now converted AirBnB escape experience. They also offhandedly mention that they met at a Comic-Con cosplaying as "Son of Bloody Face" and "Sister Jude", respectively. (Note: Throughout the episode there are statements that the show "American Horror Story" exists in-universe, and that it is unclear what actually transpired versus what was dramatized for the show.)

The pair enter and get acclimated to the energy of the house and explore, starting with the kitchen. A placard welcomes them, and notes that as Violet-Tate shippers, they should start a hunt in the room where the couple met. They follow a trail of black rose petals upstairs to Violet's old room. They speculate about the lit candles in the room and what jump scares may await them, as well as what televised facets of the house are genuine. Dylan dons a sweater resembling Tate's and they have sex while he wears it.

Afterwards, the pair lay in bed. They are startled by Adelaide's voice, and Beau's ball rolls towards them on the floor. They dress to explore the house, and Rubber Man passes the open door. Gladys awaits them "dead" at the bottom of the stairs and then gets up and walks to the basement stairs. Before going down, they debate whether they should investigate or go home and watch "Roanoke" (and why Sarah Paulson trash-talked that season). They elect to go downstairs and follow cries from a cell in the basement.

Inside are a trio of trick-or-treating teen girls trapped in the house from 10 years past who tried to seduce Ben Harmon. They describe how they came in through the front door (which Ben left ajar), were corralled by Rubber Man and Piggy Man into the music room, where Ruby awaited them. All three were fatally stabbed. Now, they are asking for help, but realize no one can help them leave the house. Dylan and Connie detect the Infantata behind them while figuring out what they will do. Before they can respond, Dylan is slashed across the face. Connie is concerned that things are "too real" and that the guests are not supposed to get hurt, and calls for the action to stop. Piggy Man and Rubber Man materialize behind the teens and stab and slash them. The "guests" attempt to flee the basement, and Dylan is slashed across his back by the Infantata; Connie is also slashed on her neck by young Thaddeus.

At the top of the stairs, Adelaide shoots Dylan in the head, saying "I told you, you dumb bitch. You're gonna die in here.". Connie is confused, as she remembers from the television episode where Adelaide died that she was outside the property line and should not be a ghost. Adelaide responds that they have come from all over for a special occasion: "the day you die".

Twisty the Clown and Bloody Face corner Connie on the stairs, and the woman screams for them to stop and that none of them should be there. Twisty fatally bludgeons Connie and her body dissolves into static. A video game banner displays "You were killed by Twisty the Clown; you are now trapped in the Murder House forever. Game Over.".

Rory complains to the video game developer (his mother, Michelle) about the sluggish controls and the inconsistencies between the show and the game's events. Particularly he notes that AHS fans will be upset about Adelaide's status and the non-sequitor characters from non-Murder House seasons in that environment. He goes on to detail why fans are drawn to the Murder House plotline because the victims are trapped based on their own human failings. He prepares to leave, and his apologetic mother is confused about his reaction. She has committed all her resources to building this game, and hoped that she and Rory could bond over it. He replies that she could have simply watched the show with him and that she doesn't get the "vibe". He says that he will be staying with his father, as things in the house have gotten strange lately.

Michelle spends the next days binge watching American Horror Story, and enlists Tim Williams to show her the Murder House property. He discloses the 9 bodies recently discovered, and Michelle responds that she also knows about Ruby's recent corpse. Tim is frustrated that no one has been willing to purchase the house, and believes in the listing. Given the low value of the property, Michelle tells him that she will invest in it for $100,000.

On Halloween, Michelle brings clothes to her ex-husband's (Steven) house where Rory has been staying. She says she will be gone for a few weeks at a convention where she will hear from the writers of American Horror Story what the themes are all about. Steven is upset that Michelle is overcommitting to her project, and feels she will bankrupt herself getting lost in it. She rebuffs him, reminding him that they aren't married anymore and that her ambition is not his business. Rory insists that Michelle has nothing to prove to him.

She returns to the Murder House, seeing Troy and Bryan cosplayers on the way in. A parade of ghosts, including Maya's crew of mean girls, file out of the door. Maya warns Michelle not to go in, as it is already crowded inside. Michelle assumes that all those that just exited (among them Rubber Man and Piggy Man) are superfan cosplayers. Ruby and Scarlett meet up on the front steps in front of Michelle. She tours the house, calling out that she is the new owner.

Sharing a tub, Scarlett and Ruby discuss Ruby's future. Ruby insists that so long as Scarlett is part of her existence, she feels no urgency to find "eternal rest". Scarlett has taken a job in the outside world, yearning for Halloween visits every year.

Beau's ball rolls toward Michelle in the kitchen. She follows the sound of crying to Ben. She admits to Ben that the deal to purchase the house will never close, as she does not have the money. She explains her situation to Ben, and she realizes who he is. She asks what he is doing there, and he responds that he is paying for his sins. She wonders if he plays the role of Ben Harmon every Halloween, but he insists it is the furthest thing from a joke. He has resumed his affair with Hayden McClaine and blames his former mistress and his wife for his actions. Michelle counsels him that he can only escape his personal hell by taking responsibility for his actions. She illustrates that she is aware her own failings caused the end to her marriage. She wants Ben to explain his experience of the Murder House, so that she fully understands the purpose. She relays Rory's theory that the trauma of the living becomes the destiny of the damned in the house, and that escape comes from learning and growing. Ben laughs at the idea of providing therapy to all the ghosts, and that they are all lost and hopeless.

She comes upon Ruby and Scarlett. Ruby explains that not all of the ghosts want to escape or to personally grow. Some embrace the trauma, and want only to revel in the misery of those more pitiable than themselves. That involves recruiting more souls to feed the house. Ben emerges to warn Michelle to run. She does not escape in time before Scarlett stabs her.

One year later, Michelle visits Rory on the street. He is upset that she lied about her plans and that they did not find her corpse right away. She apologizes, but he retorts that he would have been more impressed if she had tried to work out her issues with therapy. He has another theory: purifying fire will release all the ghosts from their trapped stasis in the house. He insists it is time to retire the Murder House. He promises her that he won't take action himself.

The ghosts return as day begins to break, and Scarlett prepares to leave. The sun rises and Ruby vanishes mid-kiss. Running a bath, Ruby notices Rory setting up a trail of fuel to the house, intending to burn it down. Michelle explains to her his theory, and Ruby chases to stop him. Dr Grant slows Michelle down, insisting that she and Rory should sit for a therapy session with her. In turn: Gladys, Ben, Maya, and her crew slow Ruby down to give Rory time to set the fire. They stab her, leaving her on the floor. Ruby texts Scarlett, who is not far away, demanding help. Ruby confronts Michelle, who is saying her goodbyes to her son. The murderous teen approaches Rory with a switchblade, but she is carried off by Ben and the mean girls. Scarlett can not stop Rory as he drops a lit match and sets the house ablaze. Separated by a wall of flame, Ruby asks Scarlett to die with her, but the living lover walks away. The other ghosts find closure and release as the house burns around them.

Rory and Steven watch the news coverage of the iconic house reduced to ash. Rory, too, seems to have found closure.

Three years later, Scarlett tours a newly constructed apartment unit with Tim Williams. She asks if he reveals that the condominiums are built on the grounds that were once the Murder House. He answers that none of the new owners have encountered any ghosts, and that he believes that all the spirits are at rest. Scarlett buys the last remaining unit for a million dollars in cash. Aghast, he asks how a woman her age could have access to such cash. She admits that she is semi-retired from assassin work.

She unpacks and decorates, finally filling a tub and calling out for Ruby. She thinks she is ready to join Ruby in eternal afterlife, but suspects she is too late. That night, Scarlett awakes to find Ruby in her bed. Ruby explains that she was the only one who wanted to stay, and all the other ghosts went on to their next stage. Ruby waited for Scarlett to come back to her, as true love never dies.

Once again, Ruby and Scarlett's final scene was from Michelle's video game. Rory is ecstatic, as he feels she finally nailed the vibe. They discuss what happened to the spirits from the house, and where they went. Michelle doesn't know. Rory wonders if they could have escaped into the world. The two leave, and Beau's ball rolls across the floor.

Connie is a character in American Horror Stories portrayed by Noah Cyrus.

Dylan is a character in American Horror Stories portrayed by Adam Hagenbuch.

Tim Williams is a character in American Horror Stories portrayed by Tom Lenk.

Steven is a character in American Horror Stories portrayed by John Brotherton.

"It all comes down to this." 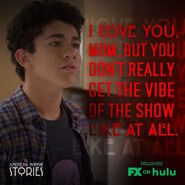 "The kids are alright."