Harry struggles to keep Alma under control. Doris is pushed past her limits.[1]

Doris delivers a baby boy. Harry is nearly overcome by the sight and scents of the blood. After cutting the cord, the parents vow they're going to be "great" from now on. In a restroom, Harry squeezes birthing blood into paper cups from the soiled linens and drinks.

At home, Doris dreams of her experiences. She is still in a confused haze as Ursula visits. She realizes that they are supposed to have (separately) left Provincetown, as they had planned. Harry explains that Doris is at high risk for post-birth complications, and they should not be separated for at least 3 weeks.

Karen encounters a well dressed Mickey, who drives her in a race car to Race Point (a beach she intends to paint). He explains that the studio leased him the Ford GTL (the closest thing to Speed Racer's fictional "Mach 5") because he is now entrusted with reviving the Speed Racer extended franchise universe. He offers her a production design job and moving with him to Los Angeles, but she quickly realizes that he has succumbed to Muse and everything that comes with it, and demands that he pull over so she can get out of the car. She flees into the dunes.

Doris awakes in the middle of the night, looking for the baby and finds him with Alma. Alma is drinking from a cut in the baby's leg.

The next morning, Harry confronts Alma. She says that the baby was not hurt, and it was just a sip. She confirms that a baby's blood is nearly like the potency of the pill itself, and that she is now able to play one of the most challenging violin pieces ever created. As she is not conceding the point of his concern, he threatens to smash her violin before she says she understands. Alma once again mentions that the two of them have outgrown Doris and that she doesn't understand keeping her mother around. Harry threatens to cut off Alma's pill supply if she harms the baby.

Ursula suggests to a still groggy Doris that Alma's "sip" was simply a dream, but Doris feels that Ursula is gaslighting her. Ursula insists that Harry is working on further scripts, but Doris is skeptical that her husband has become so prolific. Ursula suggests that Doris simply sit back and ride her husband's success (and to be on her best behavior).

Time passes, and Harry procures more blood for Alma. Doris finds a fresh bite mark on the baby's leg. Alma brings Doris pills to help her recuperate, and Doris recognizes one of them as Muse. Doris calls for Harry and demands to know what the foreign pill is. When she doesn't get a satisfying answer, Doris shows Harry the bite mark, which he writes off as a scrape from the hospital's monitoring anklet. Alma openly suggests that they stop lying to Doris and that she wants Doris to take the pill, explaining that it boosts creative performance; she adds that she won't even mind drinking the blood after time. Ursula chimes in that it's a good idea, but Harry says it is not for her. Alma questions whether they all think she's good enough to take the risk. Doris grabs the baby and runs out of the house, but is immediately confronted with the Pale People on the street. Harry guides her back to the house, and the Pale People scatter.

Karen paints a cottage, from the vantage of the dunes. Belle approaches her, chiding that Karen has not been answering her burner phone. After a critique of her paintings, Belle demands that Karen obtain the Gardner's baby for her. Pale People approach from the dunes, and Belle threatens Karen with them when Karen refuses. Belle begins destroying Karen's canvases, explaining that newborn blood is a particular (unspoiled) taste. If Karen continues to refuse, Belle says she will gouge out the painter's eyes.

Doris frantically searches for a pair of shears that she can use as a weapon. She sneaks downstairs and overhears Holden's cutting insults about her design boards. Harry sees her and suggests she return upstairs. He introduces the visitor to his wife, implying that Holden can help Doris while she's impaired from the difficult birth. She reluctantly returns upstairs to feed the newborn.

Mickey places some of Karen's paintings in a box when the painter herself storms in. She is furious that Mickey told Belle how to find her, and explains her predicament. Mickey says that Karen's solution is simple: start taking the pills. Karen wants to save the Gardner baby from Belle and anyone she would send afterwards. Karen insists that taking care of the baby will help her get her life in order, and that Mickey must help her before he loses what's left of his soul.

Alma and Doris decide to name the baby "Eli". Alma explains the effect of newborn blood, and how it super-powered her playing. Doris reminds Alma that the baby is her brother and that she must not do that to any baby (including her brother). Alma promises that she is sorry and that she won't. Doris laments that their family is already lost, but Alma insists that Doris has the talent — despite what Harry thinks — to survive the pill together. The daughter makes the case that they can have it all. Doris says that it's not worth hurting people to be good at something, though Alma insists that her mother will forget the downsides. Ultimately, she convinces her mother to take the pill.

Doris begins obsessively sketching design boards until she vomits across them. Alma insists on going out for dinner with Harry and Ursula, and they leave the sleeping mother alone (without the car keys). Mickey and Karen approach and break the window to enter the back door. The Pale People are not far away, but Mickey tells Karen they will not harm her so long as she is with him. Karen pleads with Mickey not to kill Doris, and Doris confronts them before they can grab Eli. They see that her skin has grown pale and her hair has begun falling out. Karen flees into the street and is quickly surrounded by the Pale, who chase her to a doorway. Mickey arrives and intervenes, offering Karen a choice to take Muse. He insists that she should believe in herself the way that he does, but Karen says that she doesn't care if she is good enough for the pill to work: she doesn't want to lose her humanity the way he has. He leaves her with a pill and walks away. The Pale encroach on Karen, and she pops the pill into her mouth to save her own life. The Pale instantly recoil and slink away.

Doris sees her reflection and shaves off her remaining hair. As the baby cries, she grabs a knife from the kitchen and takes it back upstairs. Moments from bringing it down on the baby, Harry wrestles it from her. Harry tries to get through to his wife, and while she briefly recognizes him she lunges again for the baby. He forces her into the bathroom and traps her there, wondering aloud why she would have taken the pill. Alma admits that Ursula coached her to do so, and that it was the right thing.

Karen is squeamish that she took one of the pills. Mickey insists that she is just hungry, and he resolves to track a victim for her. He offers again to take her to Los Angeles with him, but she thinks they are both cursed now. Mickey calms her by asking her what her masterwork would be. He says to try to create it immediately, after she feeds, to see if the pill worked.

The next morning, a dejected Harry approaches the transformed Doris. He laments to her that he should have been honest with her: he has indeed outgrown her. He suggests it is better this way, and now she will not have to watch his star rise. He releases her to join the other Pale. Ursula quips that there is nothing more pathetic and sad than a person with no talent trying to make it in the world. Alma, though, feels something and clasps Harry's hand.

Mickey takes Karen to the dunes, where a convenient victim awaits them on the beach. He offers to help her, and she tells him that she is going to help them both. She leans in for an embrace, and rips out the side of his neck with her teeth. She wrestles him to the ground, drinking, and begins painting. Before long, she approaches the shore and slits her wrists to bleed into the surf before walking in. She allows the waves to crash over her, leaving behind a red tide.

Ursula and Alma pay a visit to The Chemist, as the agent schemes to have the most successful talent and literary pool of all time supplied by the drug. She thinks that Alma will help persuade The Chemist. They pass the cemetery and observe a Pale Doris eating a rodent.

Eli Gardner is the newborn son and second child of Harry and Doris. He was born in Provincetown, Massachusetts. He was born on February 9th, 2021. 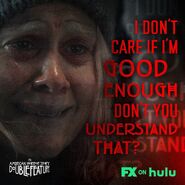 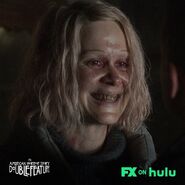 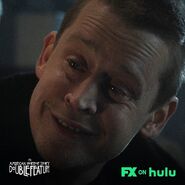