Penny
Grace Jane Gummer (born May 9, 1986) is an American actress. She portrayed Millie in the third season, Coven, and Penny the "Astounding Lizard Girl" in the following season, Freak Show.

Grace Gummer was born on May 9, 1986 in New York City, New York, US as Grace Jane Gummer.  She is the daughter of Oscar-winning actress Meryl Streep.

She is known for Frances Ha (2012), The Homesman (2014) and Margin Call (2011). On television she has had recurring roles as Hallie Shea in The Newsroom, Paige Willis in Zero Hour, the titular role in Paloma, and Anna Moore in Gigantic. She played author/director Nora Ephron in the web-series Good Girls Revolt and Julie Gelineau in the sci-fi drama Extant. In 2016 she joined the second season of Mr. Robot as FBI agent Dominique DiPierro. 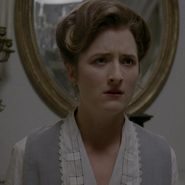 Retrieved from "https://americanhorrorstory.fandom.com/wiki/Grace_Gummer?oldid=149157"
Community content is available under CC-BY-SA unless otherwise noted.