Jennifer Lynch
"Great Again" is the eleventh and final episode of Cult. It premiered on November 14, 2017.

Kai sets his master plan into motion. Ally reveals the truth to Kai.[1]

Kai (now imprisoned) engages in the pinky-power ritual with guard Gloria Whitmore, who declares her dislike for the warden. She and Kai discuss authority, and he convinces her to open her shirt and show him her chest. They are interrupted by two other convicts who lead him away to a restroom. They beat him for disrupting the natural prisoner pecking order. He enrages one, who is then fatally stabbed by the other (a follower of Kai named Crotchy). Kai explains why Crotchy now must die as a martyr to the cause to cover his escape. Kai resolves (to his version of Charles Manson) that they should get going with the rest of the escape.

In the prison yard, a prisoner named Trevor Geary approaches Kai through a gauntlet of followers. They engage in pinky-power, where Kai calls Trevor a coward for dumping a child in a reservoir after he'd killed it driving drunk. Kai is willing to take him on anyway, on a probationary basis, after swearing loyalty. Kai says his downfall was being sold out by a traitor.

Kai is concerned, as he can't reach Speedwagon by phone. The devotee has never missed a gathering. Ally gives Kai a pill before the gathering. In front of the assembled devotees, he says that the night of a thousand Sharon Tates has been downgraded to one hundred. The army of followers has details on their targets under their seats. The hits on the mother and unborn fetuses must be executed with precision (unlike the sloppiness of the Manson family). Kai intends for the rage to be directed at Senator Jackson, paving Kai's ascension in politics. The men practice their stabs on watermelons.

Beverly, preparing a salad from the watermelons, is inspired by Kai's message. She tells Ally that she intended to be the last person alive, but that now she begs Ally to kill her. Ally tells her they all did what they had to do, and that it has changed. The next night, she says, will be glorious. Kai enters, unhinged about Speedwagon. He's increasingly paranoid about the plans made. Ally says she needs to show him something. She shows him the recording device that she found two days earlier, and that she was trying to spare him from knowing about Speedwagon's betrayal. As it turns out, he was an informant that infiltrated to avoid drug charges. After establishing that he's not able to get a message to the state police, she fatally stabs him. Ally also relays that Winter was innocent the whole time.

Ally tells him to channel his rage and finish the plan in Winter's honor. Kai details the kill kit plans and rallies the troops. Churned up, he also gives them amphetamines. Ally walks out of the house (ostensibly) to get some snacks, and the FBI storm the inner sanctum once she's clear. Many of Kai's army die in the cross-fire as Kai and Beverly are captured. Kai is led out and realizes that Ally set him up.

At The Butchery On Main, a customer raves about the restaurant; she also has heard about Ally's cult escape and wants to take a picture with her, which Ally declines. Beverly enters, and has dinner with Ally. Beverly is concerned, even with Kai's guilty pleas, that more is to come. Ally says that Beverly has avoided charges because she did not fit the profile. Kai won't turn on Beverly because his narcissism won't allow Beverly any credit that would take the focus off him. Ally explains that the FBI approached her while Rudy had her committed, for which she got immunity. Beverly hints that she knows that Ally killed Ivy, since Kai didn't take credit for her murder. Beverly is no longer a reporter and is now a bartender. Erika, Ally's new girlfriend, brings out a dish; they invite Beverly to Oz's birthday party the following weekend.

Erika answers the phone later at the party. Rachel Maddow's team wants to interview Ally, but Ally keeps turning them down (as she did Lana Winters). The phone rings again, this time a collect call from Kai. She accepts the call. He says the only thing keeping her alive was that Ally was his child's mother; she gloats that he must have received proof of Oz's true paternity. He swears vengeance against her and damages the payphone he is talking on. Gloria leads him back inside, where he has sex with her while watching Ally on the news: Ally is running for the Senate seat he intended to run for.

Ally shows Beverly her campaign advertisement, which discusses her story and that she is after two other big cults: the Democrats and the Republicans. She says she will enter the Senate on a mission to dismantle the two-party system. Beverly says the focus groups like the ad and Ally as a candidate. She's still trailing behind in polls as she's not seen as strong, experienced, or a trusted leader. Ally says "lack of experience" is code for a being afraid of a strong woman. Ally wants Kai removed from the ads and to distance herself from him in the public view. Ally intends to show her strength in the debate with Senator Jackson.

In the prison laundry, Trevor (now known as Rimshot, and sporting duplicates of Kai's tattoos) begs to escape with Kai, but Kai explains that he needs Rimshot; he then fatally stabs his follower and begins mutilating him so that he can pass as a body double. Gloria reluctantly assists in peeling off the man's face. Kai and Gloria walk out the gate, Kai dressed as a guard.

Shortly before the debate, Beverly tells Ally about the report of Kai's dead body, but they both believe Kai has escaped. Ally holds her own against Jackson, and Kai arrives to "ask a question". He approaches the stage (handed a gun by Gloria) and takes credit for making the symbol of Ally: the hope that women can succeed and lead men. He says that they should learn their place. Ally gun to her head, fights back. He fires, but it turns out the gun is not loaded. Gloria was recruited by Ally as well, and Ally trained her to resist Kai's control. The two women exchange knowing smiles. Kai demands that Ally say something, and she does.

"You were wrong. There is something more dangerous in this world than a humiliated man: a nasty woman." With that, Beverly shoots Kai in the head. The election returns show that even with only 6% reporting, Ally got 80% of the female vote; this surely secures her to unseat Jackson.

Ally puts Oz to bed. He asks if she's in charge now, at least of her constituents. She explains public service, and that she leads them to make a better world. She leaves him to go to a meeting. He wonders if she's meeting people like Kai, but she says no: they're a group of powerful women who want to change the system.

She applies her makeup and dons a hooded robe, similar to Bebe Babbitt's and the Coven.

Gloria Whitmore is a guest starring character in American Horror Story portrayed by Liz Jenkins. Gloria began a relationship with Kai in his prison where she became a cult member. She helped him escape the prison only to betray him after Ally told her about Kai. At the debate scene with Ally and Herbert she hands Kai a gun for him to find out it is out of bullets letting Kai know he was betrayed.

Trevor Geary is a guest starring character in American Horror Story portrayed by Ian Bamberg. Trevor was arrested for running over a child and disposing of the body which Kai remarks as cowardly acts but he lets him in anyway. After getting a prison tattoo that matched Kai's and having his face disfigured, Trevor gave up his life for Kai, so that Kai could escape prison.

Erika is a guest starring character in American Horror Story portrayed by Annie Ilonzeh. She is Ally's new girlfriend after Ivy Mayfair-Richards. It is shown she turns down an interview with Rachel Maddow on Ally's behalf. 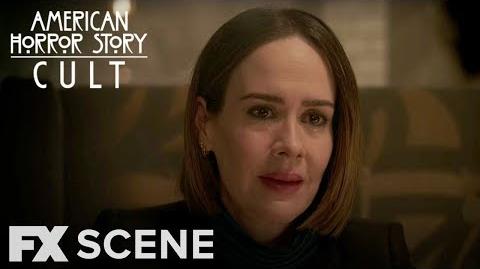 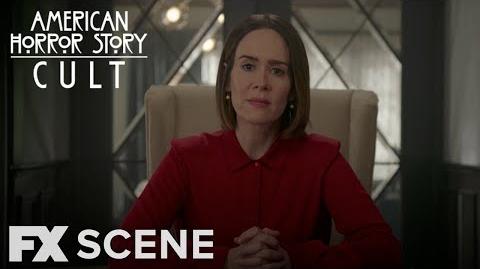 Retrieved from "https://americanhorrorstory.fandom.com/wiki/Great_Again?oldid=149481"
Community content is available under CC-BY-SA unless otherwise noted.