Tate comes face to face with his past; Ben and Vivien are haunted by one of the house's newest guests.

Larry is still banging at the door and scaring away trick-or-treaters. Out of the corner of her eye, Violet catches a glimpse of Rubber Man. When she turns, he vanishes without a trace. She heads upstairs to her room and an arm reaches out from under the bed, but she pulls away before it can touch her, as she hears rocks softly against her window. It's Tate outside, who gives her a rose painted black and takes her to the beach for their date.

Ben and Vivien arrive home to the screaming alarm. There's a knock at the door and Ben answers it, seeing that it's Hayden, he slams the door in her face and is in complete disbelief. Violet calls Vivien, saying she's out with her friends, and is safe. In reality, she is with Tate at a lifeguard station at the beach.

Ben arms himself, allegedly from the vandals outside. Vivien talks him down, and then tells Ben she wants him to move out the next day. She states that she wants to take a bath, and as she walks away, Ben angrily affirms that he is not giving up on their family.

Ben goes outside to look for Hayden and grabs a shovel. Larry sneaks up behind him, saying that he wants his money. Ben responds by hitting him in the face with the shovel. He continues to throw Larry around, demanding to know where Hayden is. Larry insists Hayden is under the gazebo. Ben believes that Larry and Hayden are working together to blackmail him, but Larry realizes that Ben is unaware the spirits of those who die on the property dwell in the house. Larry laughs, still being beaten, about how naive Ben is about the situation. Larry taunts Ben, begging for Ben to kill him so that he can haunt him from the dead, but Ben settles for threatening Larry and telling him never to return.

Luke, the Heirloom Security officer, arrives, questioning Vivien about the triggered alarm. Vivien covers, saying that Violet must have set it off and also says the porch vandalism must have been neighborhood kids. The officer leaves after being assured that the Harmon's feel safer with him around.

On the beach, Tate and Violet begin making out. Violet offers for Tate to take her virginity, but Tate declines, saying that he feels something deeper for her. He apparently does not have an erection and apologizes, saying that this has never happened to him before. Violet jokingly asks him if he's gay. He denies this and says that he believes that the medication that her father prescribed him is causing his erectile problem. Offended, Violet gets up to leave, but he asks her not to go. Tate describes how this place used to be his refuge from the stresses of high school and some high school students approach the couple, with gory injuries. It turns out that they are angry with Tate, though he claims not to recognize them. Tate and Violet leave.

Hayden calls Vivien as she prepares her bath. Hayden taunts Vivien and leaves a note in the steam on the bathroom mirror demanding that Vivien ask Ben about Boston.

Vivien freaks out about Hayden being in the house. Ben argues with her about calling the police, citing the public reaction to ten cop cars outside 'The Murder House'. In actuality, Ben grabs a kitchen knife and goes looking for Hayden in the basement. He finds her and begs her to leave. Ben still believes that she and Larry are extorting him. Hayden begins to cough up bloody internals, realizing that she is rotting inside, but not initially knowing why. She catches up to Ben, then berates him for her grave and treatment. Ben is still frustrated and confused about the situation, until Larry knocks him unconscious with the shovel. Larry tries to apologize to Hayden for what happened, but she dismisses him, saying she'll deal with him later. Larry offers his arson talents to take care of Vivien.

Chad is tearing up the yard decorations. Vivien confronts him, and he blames her for ruining his evening with Patrick; he speculates as to the infidelities Patrick has been indulging during the evening. Vivien threatens to call her security company, but Chad warns her that no one can protect her, yelling at her to get out of his house.

Hayden relaxes in the tub upstairs while Vivien searches for Ben. Hallie begins barking, and Vivien presses the panic alarm. Investigating, she finds a bathroom downstairs on fire.

Back at home, Violet asks Tate about his pursuers. He claims again not to know them. The students have followed the couple to the Murder House.

Hayden calls and taunts Vivien on the phone once more. Hinting that she is in the kitchen with Hallie. This prompts Vivien to look for her, armed with a golf club. Cautiously, Vivien looks around for the missing dog. She is startled when something red explodes inside the microwave.

On the porch, the teenagers are waiting for Tate. Violet tries to menace them, but they taunt her instead. They discover that Violet is unaware as to why they are so angry with Tate: opening fire on them in school, killing them all.[2] Tate tries to protect Violet by leading the students on a chase away from the house. Violet calls the police, but her call is interrupted by Constance, who blames Violet for Adelaide's death.

Once again, Vivien presses the panic button. She is relieved that a noise in the closet is a trapped Hallie. Hayden stands in the bedroom door, saying that she won't leave until Vivien is aware of Ben's indiscretions, including her murder and pregnancy. Vivien thinks that Hayden is referring to Vivien's unborn child, which Hayden was unaware of. Hayden blames Ben's nonchalance about her abortion on Vivien being pregnant, and advances towards her with a large shard of glass, intent on cutting out Vivien's fetus.

Meanwhile, Larry is saturating the dining room with fuel until stopped by Chad, who confronts him.

Ben awakens bound with rope in the basement. Nora Montgomery stands over him, chastising him for failing to protect his family and unborn child, then cuts his bonds. He reaches the bedroom in time to interrupt the struggling Vivien and Hayden. Vivien, at Hayden's urging, asks Ben about Boston. Ben admits that he lied, not only about the recent visit, but about a continuing his affair with Hayden after Vivien caught them. Vindicated and mission fulfilled, Hayden drops the shard of glass. Luke enters and removes Hayden as an intruder.

Constance is sitting in her kitchen with Violet. Constance recounts visiting Adelaide in the morgue. In the morgue drawer, Constance applies makeup to Adelaide's corpse, calling her a pretty girl. Constance does not truly blame Violet, and allows her to have one of her cigarettes. Constance discloses that Tate is one of her children. She makes Violet promise not to reveal Adelaide's death to Tate, saying that it will crush him emotionally. Constance praises Violet's emotional fortitude, and speculates that it may be what attracts him.

The students' ghosts catch up to Tate, but he does not seem to realize they are ghosts. They confront him about his actions and want to know why he selected them for death. He starts to realize that his school shooting fantasies actually occurred, but he still does not remember.

As the sun begins to rise, the ghosts whose souls are trapped within the house return including Hayden, who vanishes from the back seat of Luke's car. Ben packs his things into a suitcase. He kisses Vivien goodbye, although she can not bear to look at him. He leaves the house without a word. 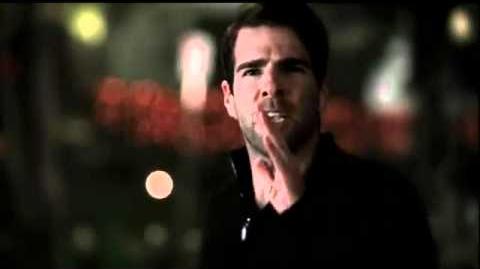 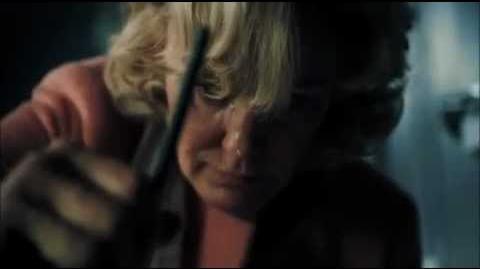