Harry Gardner is a struggling writer who moves his pregnant wife and young daughter to the isolated beach town of Provincetown for the winter [1]. He is a character in Double Feature portrayed by Finn Wittrock. A nasty case of writer’s block will soon become the least of his worries. [1]

Harry Gardners father was a law professor. He recalls being raised under poor parenting, thus deteriorating his image as an ideal father figure to Alma.[2]

Before moving into Provincetown, Harry has written various screenplays, mainly working on TV shows and network procedurals, based in New York under the agency of Ursula. She described Harry's writing career as "interchangeable" with that of other scriptwriters who "move from one network writer's room to the next." [2] During his relocation to Provincetown, Harry has been tasked to write a pilot despite his struggle with a lingering writer's block.[3]

Harry is a tall well-groomed man, with brown hairs and dark eyes, with a wardrobe taste of comfortable basics. Prior to taking the black pill, Harry visited Lark Feldman and sharpened his teeth, disguised by dentures.

He has a history struggling in the writing industry, and his writer's block worsened after moving to Provincetown. Despite his best effort to be patient, his rise in stress was redirected into criticizing Alma's violin practice.

Harry, a struggling screenwriter, takes a drug given to him by two other authors. His writers block soon goes away and he deals not only with side effects of the drug that include human blood, but with the troubles that also come to keeping this secret. 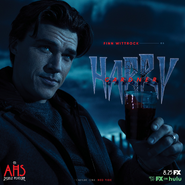