Howard Deutch
"Head" is the ninth episode of Coven. It premiered December 11, 2013.

Cordelia’s attacker is revealed. Fiona looks to form an alliance with Marie Laveau. Nan learns a disturbing truth about Luke’s past.[1][2]

A father and son are hunting and camping in the Chattahoochee National Forest. The young boy is Cordelia's future husband, Hank. Father and son are armed with silver bullets, and they are trying to hunt down a witch. They find a witch and Hank's father plans to lure the witch towards Hank, but when he does, Hank hesitates on killing her. The time gives the witch the opportunity to send fire towards Hank, but Hank's father saves him and kills the witch, burning his arm in the process. He reminds Hank not to show mercy and to remember what their prey is.

At Cornrow City, Fiona returns Delphine's head to Marie to discuss a union of their factions. While Delphine's head complains (and her body in the cage swats flies), Marie laughs. Fiona presents the silver bullet as evidence that they will soon have a common enemy. Marie passes the witch hunters off as a non-concern and derives from Fiona's wig that Fiona is not strong enough to protect the witches as her cancer is sapping her power. Marie calls for Queenie to burn Delphine's head, much to Delphine's relief.

Myrtle watches as Cordelia stumbles blindly around the kitchen. Myrtle recalls Cordelia's first days at Miss Robichaux's after Fiona all but abandoned her there. Cordelia assuages Myrtle's fears that Cordelia believes Myrtle responsible for Madison's murder, telling her that she does not need to read a vision off Myrtle to know that Fiona set her up.

At Delphi Trust in Atlanta, a front for the witch hunters, Hank reports to his father, the head of the corporate organization. Mr. Regard is unhappy with Hank's current events and his alliance with Marie Laveau. He was intended to be embedded only for reconnaissance. His actual fieldwork, including the Kaylee incident, is resulting in unintended collateral damage, which may draw undue scrutiny from the government. The Corporation, as they call themselves, claims responsibility for the acid attack. When Hank reacts, his father reminds him that their marriage is only a pretense and to remember that she is prey.

Quentin and Pembroke attend a luncheon, hosted by a fully restored Myrtle. They are incredulous that she is so well restored and want to know more about Misty Day. Myrtle gushes about Misty, while the Monkshood Myrtle laced in the food paralyzes the two council members. Myrtle turns the now one-sided conversation to the council members' attempts to kill her, while she scoops one eye from each of them with a melon baller. Myrtle implants the brown and blue eyes into Cordelia to restore her eyesight. In the greenhouse, she then proceeds to cut up and dispose of Quentin and Pembroke's bodies.

Fiona arrives and is overjoyed to see Cordelia's sight restored, uncertain of how Myrtle was able to perform such delicate work. Myrtle responds that her resurrection empowered her, revealing magical secrets. Fiona threatens Myrtle with a visit from the council, unaware of the fact that Myrtle secretly dismembered the members in the greenhouse and disposed of the parts in a vat. Cordelia calls for a truce between the two of them before she leaves to rest. A hug from Myrtle reveals that her visions are gone, now that she can see with her eyes again.

Madison and Zoe track down Nan, who has been waiting overnight to see a comatose Luke, now fiercely guarded by Joan. With her telepathy, Nan relays to Joan a song that he had like sung. Joan thanks Nan for her miraculous intervention.

Against Marie's orders, Queenie keeps Delphine's head and intends to educate the bigot with a film festival, starting with Alex Haley's "Roots." Delphine tries to block it out, while Queenie is out of the room, singing "Dixieland."

In a motel room, Hank experiences spontaneous wounds and injuies. Meanwhile, Marie is having her way with a voodoo doll of him. One of her thugs visits Hank and demands that the witches be massacred by that night, or else he will be killed. She continues the torture while talking to him over the phone to emphasize her point.

Later, Cordelia teaches Misty an herbal potion and incantation to restore a dying plant to health and teaches her the berries provided grant protection and that they are needed to protect the Coven. A drunken Hank enters and is amazed that her sight is restored. He hugs her, hoping to reconcile. Unaware of Hank's attempt on her life, Misty greets him but is cut off by Cordelia, who reveals where his possessions are and her plans to file for divorce. A flashback shows that it was Hank who attempted to kill Misty in the swamp.

After gathering his possessions, Hank is stopped by the new attack dog, Endora, and Fiona, who verbally spars with him before bidding him leave. Endora detects Kyle in the next room and Fiona demands that he leave. While Fiona's head is turned, Kyle snaps Endora's neck, his intentions unclear. Fiona is amused.

At the hospital, Joan brings baked goods to Nan, exclaiming that she cannot repay Nan's assistance enough. Joan feels that Nan has restored her faith.

However, Nan tells Joan that Luke, through "God," found out that his father's death was Joan's fault.

The act was in response to the indiscretion he had with a friend of Joan's, a woman he hoped to be with after leaving her. Joan planted a bee hive within Luke's father's car and when he was being stung, stood nearby, relocking the doors with the remote every time Mr. Ramsey tried to escape. An enraged and guilty Joan sends Nan away, calling her magic a mere sham.

Fiona has restored Kyle to the point where he can play cards and hold a conversation. Fiona insists that, while not fully restored, he is able to act as their bodyguard and will attack on command.

Queenie returns to a smug Delphine, glad that she was able to elude Queenie's "education". Queenie is not surprised but still determined. The girl's new video traces the struggle of civil rights' activists, set to a gospel about freedom.

Hank prepares an assault, but this time focuses his attack on Cornrow City. While Delphine tearfully watches the inequity of the 1960s unfold upstairs, Hank guns down nearly everyone in the salon. He aims a shotgun at Marie at close range, managing to wound her arm while she attempted to teleport. Marie is at Hank's mercy as he prepares to shoot her dead. Queenie uses her voodoo doll power to shoot herself through the mouth, killing Hank. Shortly after, Hank's father mourns over the photos of his dead son.

In the hospital, Joan removes a tube from Luke's mouth, causing him to awaken.  He groggily accuses her of murdering his father. Joan tells him to go back to sleep and then suffocates him with a pillow.

Meanwhile, Marie arrives at the door of the academy to discuss a truce since her tribe was attacked. Triumphant, a smug Fiona allows her inside.

Dennis Ramsey was the father of Luke and the husband of Joan. At some time in his life, he wanted to be separated from Joan because he was having an affair with a woman named Mrs. Martone who was in Joan's book club. Devastated by this and taking advantage of his allergy to bees, Joan planted a honeycomb in his car and watched him die. 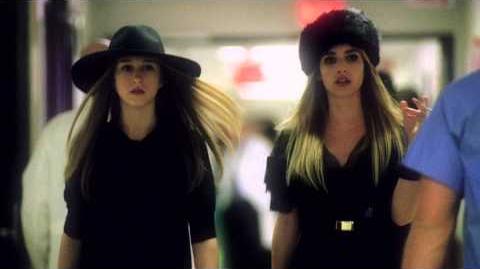 Zoe, Nan and Madison visiting Luke
Add a photo to this gallery

Retrieved from "https://americanhorrorstory.fandom.com/wiki/Head?oldid=150086"
Community content is available under CC-BY-SA unless otherwise noted.