Agnetha
Helena Mattsson (born March 30, 1984) is a Swedish actress. She is best known for her recurring role as Agnetha in American Horror Story: Hotel.

Helena Mattsson was born and raised in Stockholm, Sweden with two sisters. When she was a teenager, she was discovered by a huge modeling agency in Sweden. She graduated from Preforming Arts school and moved to New York to become an actress.

Mattsson made her big break in the movie Sweden Ohio (2004) when she was 19 and later appeared in movies such as Iron Man (2010), Seven Psychopaths (2012), and many more. Mattsson has also landed recurring roles on television shows such as Desperate Housewives, Nikita, 666 Park Avenue, and Mistresses. In 2015, Mattsson was offered a role in American Horror Story: Hotel as Agnetha alongside fellow Scandinavian actress Kamilla Alnes.

Since wrapping her work on American Horror Story, Mattsson has completed work on the upcoming films Something About Her, Melvin Smarty, Smartass, and Code of Honor. 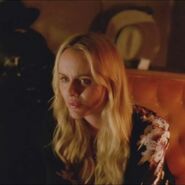 Helena Mattsson as Agnetha (Hotel)
Add a photo to this gallery
Retrieved from "https://americanhorrorstory.fandom.com/wiki/Helena_Mattsson?oldid=149179"
Community content is available under CC-BY-SA unless otherwise noted.