View source
watch 01:33
House of the Dragon Trailer - The Loop
Do you like this video?
Play Sound

Holden Vaughn is a seemingly upstanding Provincetown resident. He is a character in Double Feature portrayed by Denis O'Hare. Of course, there’s nothing upstanding about the grim discovery Holden makes on the beach. Severed limbs, anyone? [1] 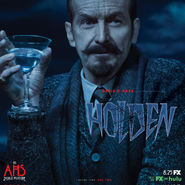