Vivien and Violet find themselves in a dangerous situation eerily similar to a past event. Ben goes back to Boston to fix a mistake.

Three young women are leaving the house to attend a concert by The Doors while thier roommates Maria and Gladys stay behind. Shortly after they leave, a man with blood on his forehead arrives outside and asks for help. Maria lets him in, and while trying to clean his wound she discovers that he is uninjured. The man strikes Maria with a nearby bowl, knocking her unconscious. He drags Gladys upstairs, chanting "Fatty Patty" and drowns her in the bath tub. The man tells Maria to put on a nurse uniform, begging for mercy, and telling him that she is a virgin, he binds her arms and feet and leaves her lying on the sofa. Maria prays for help and the man stabs her repeatedly in the back.

Ben is in a session witth Tate, who reveals he has sexual fantasies about Ben's daughter, Violet. After, Ben's cell phone begins ringing and he grows irate as the caller continues harassing him and reveals that she is pregnant.

At a skate park, Violet commiserates with Leah. Leah explains that she hasn't told anyone about what happened and as a result her hair has begun turning white, out of fear.

Tate begins watching Violet as she sleeps. The burglar alarm goes off, waking Ben and Vivien, the former of which discovers the front door open. He discovers Addy giggling downstairs, kneeling on the floor and sends her home through a door in the basement. Ben walks back upstairs, unaware of a red ball rolling across the floor from Addy's playmate.

Vivien feels that something is wrong with the baby due to a lack of sickness, but Ben thinks she is paranoid, given her last pregnancy.

Ben meets with a new client named Bianca. Bianca tells Ben her dreams of being bisected by a malfunctioning elevator and informs him of his home's inclusion on the Eternal Darkness Tour. After the session, Ben tries to reach Tate's mother to inform her that he can no longer continue his sessions with Tate due to his interference with Violet. Bianca returns unexpectedly and Ben escorts her out.

In the Langdon's kitchen, Constance is baking cupcakes, and has Addy spit in the batter as she mixes in syrup of ipecac, explaining the effects of severe stomach upset and possible internal bleeding.

Ben jogs, crying and guilty, thinking of his affair with Hayden, the pregnant woman on the phone, and the student that Ben had an affair with prior to moving to Los Angeles. Ben encounters Larry, who advises that Ben lie about his upcoming trip to see Hayden.

Constance brings the cupcakes as a peace offering for Violet and detects that Vivien is pregnant. Constance reveals that she herself has had four children, three of which were born with defects. The remaining son was physically perfect, but Constance lost him to other things. She insists that Vivien's baby is fine and also reveals that Moira once worked for her.

Vivien offers to have a girl's night with Violet, but she declines and goes on to inform her that she knows Vivien is pregnant. Violet tells her mom that if she thinks having a baby will save her marriage, she is wrong. Vivien leaves the room, hurt by Violet's comments.

Ben visits with Hayden who claims she is over Ben, and that she wants him there for support while she has an abortion the next day.

Back at the house a woman is at the door. Vivien sees through the peephole that the Fiona's scalp is bloody, and she demands help, but a suspicious Vivien does not let her in. Vivien attempts to call the police, but her phone is nowhere to be found. The intruder enters Violet's room as she searches for her phone to call 911. Vivien threatens the now masked woman through the door, but a third intruder is already behind her.

Downstairs, the three intruders, Bianca, Fiona and a man named Dallas  unmask themselves in front of a captive Vivien and Violet. They intend to re-enact the 1968 murders of Gladys and Maria and have brought the bowl that R. Franklin had used. Violet is assigned to play the role of Gladys and be drowned in the tub upstairs but she resists and manages to briefly escape to the kitchen where she is found by Tate. Tate tells her that she must get the intruders to the basement where they will be dealt with.

In the music room, a bound Vivien spies Addy behind him and subtly tries to tell her to get help. Her captor turns, but does not see Addy.

Upstairs, Fiona is filling the tub while Violet is forced to dress in the nurse's garb. Bianca enters while eating the toxic cupcake. She starts to feel the effects immediately and backs out, heading for a bathroom. Violet waylays Fiona's plans, informing her that the tub used in the drowning was moved to the basement in a remodel.

Constance is at home, fondling a shirtless young man. Addy knocks on the door, warning Constance about the intruders next door. Addy grows insistent, and Constance locks her in a closet surrounded by mirrors, leaving a screaming Addy alone inside.

Bianca walks back to the bathroom after throwing up, where Tate strikes her in the abdomen with an axe.

Dallas cuts Vivien's bonds, intending for her to dress in the nurse uniform. She throws it in his face, and as they wrestle Vivien finds the historic ashtray and bludgeons him with it. She races upstairs, expecting to find Violet, but only sees the trail of blood.

Vivien and Violet meet on the ground floor and escape from the house, getting Constance's attention.

A ghostly Maria leads Dallas downstairs. He finds Fiona with her throat slit, beside a filled tub flanked by Maria and Gladys.

At the clinic, Hayden is called in for her procedure. Ben's phone vibrates, and he sees that he has missed thirteen calls

Constance arrives in the basement to join Tate and Moira, as they stand in front of the murdered bodies of Fiona and Dallas. Tate does not claim responsibilty and the trio agrees that they must get rid of the bodies to protect the family, if Constance wishes for Ben to continue treating Tate.

The police question Ben and Vivien. Ben claims he was seeing a patient, and the police show him the file they have on Bianca, who was using the therapy sessions to case the house. The police located her, finding her practically cut in half, six blocks away. Since the other two attackers are missing, the police assume that they pulled a copycat of the Black Dahlia on her for her reluctance to commit the murders, given their interests. After the police leave, Ben asks Violet about her claim that Tate helped her escape and how he got into the house. Violet, angry with Ben, is happy that Tate was there when Ben was not. She also goes on to tell Vivien that she was very brave. Ben points out to Vivien that he is home now, but she says that he is not, as she plans on selling the house.

Gigi lived in the Murder House in 1968 with Maria, Gladys, and at least two other girls. The house was serving as a dormitory for nursing students in the 1960s. She was the dominant and popular girl of the house, and she was very sexually active. She invited Maria to come with her and two other girls to a concert featuring The Doors, which Maria politely refused, saying she needed to study. 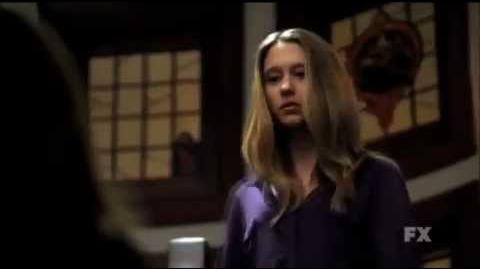