View source
watch 01:04
Who is Infantata?
Do you like this video?
Play Sound

Thaddeus Montgomery (also known as The Infantata) is a being crafted from the pieced together remains of Charles and Nora Montgomery's child. He is a character in the first season (dubbed by fans "Murder House") primarily portrayed by Benjamin Woolf (AHS).

Though never referred to as "the Infantata" in the dialogue of the series, this name has been given via the credits and by members of the series' production during interviews.

Charles performed abortions in the basement of the house in the 1920s to alleviate his family's financial distress. Unfortunately, one of his patients told her boyfriend, who kidnapped Thaddeus and dismembered him in an act of revenge. After the pieces were returned to Dr. Montgomery in jars, he lost his mind and attempted to sew his son back together, bringing Thaddeus back to life. To achieve this, he told Nora he used "the beating heart of one of our girls", presumably referring to an almost fully developed fetus he removed from one of the patients.

When Nora tried to nurse the reanimated Thaddeus, it bit her to quench its blood thirst. She then, realizing the truth of what her son had become, tried to kill it with a letter opener, but claimed that it wouldn't die. Nora would later kill Charles and herself over his crime and what it had forced her to do. The Infantata continues its existence in the basement, sating its blood thirst.

Infantata once attacked Tate when he was a young boy. Nora rescued him and told him it would disappear if he closed his eyes and told it to go away, which began her motherly relationship with Tate.

The real life inspiration for Thaddeus was the kidnap and murder of Charles Lindbergh Jr. in 1932. Charles Lindbergh Jr. was the two-year-old son of famed aviator Charles Lindbergh and had been sleeping in his crib on the evening of March 1 as his parents dined downstairs. At 9:30 Charles Lindbergh heard a noise like the breaking of slats but dismissed it as the servants breaking crates in the basement. At 10 pm the nursemaid found the child missing from the crib and an envelope on the windowsill. Charles Lindbergh armed himself with a gun and searched the house and grounds; finding a crudely constructed ladder that had been propped against the nursery window (leaving scuff marks by the window) and dissembled into three parts and hidden in a nearby foliage.

The newspapers quickly picked up the story and rewards for the safe return of the child were offered up by good Samaritans and government bodies. The kidnappers contacted several of these people to organize delivery of the reward money. John F. Condon, who offered $1000 reward if the baby was returned to a Catholic priest, corresponded with the kidnappers and arranged a meeting with one in  Woodlawn Cemetery. The kidnapper sounded foreign and concealed himself in the shadows; explaining that he was a sailor, that the baby was safe and would only be returned if he was given a ransom. Condon doubted the man's story and asked him to give him proof in the form of the baby's sleeping suit. The man promised that he would before asking; "... would I 'burn', if the package were dead?". When pressed, the man quickly stated that the baby was still very much alive. On March 16, Condon received a toddler's sleeping suit by mail accompanied by a ransom note. Condon met with Charles Lindbergh to authenticate the suit and when confirming that it was his son's suit they arranged a meeting to deliver the ransom.

The ransom was meticulously planned to identify the kidnapper. The ransom contained gold certificates as gold certificates were about to be withdrawn from circulation and would raise suspicion when used. The police recorded the bills' serial numbers. Even the box containing the ransom was custom made to help track the kidnapper. On April 2, Condon met with the man and exchanged the $50,000 ransom. The man took the money and said that the baby was in the care of two women. The man took the ransom money and never contacted Condon or Lindbergh again.

On May 12, a delivery truck driver made a stop to relieve himself in a wooded grove by the road. There he found the badly decomposing body of Charles Lindbergh Jr. The body had been partially eaten by animals but was still identifiable by the overlapping toes on his right foot and the shirt the baby was wearing. The child had been killed by a blow to the head and there had been an attempt at a shallow burial. The body was found only a few miles from the home; the police speculated that the kidnapper killed the child and never intended to return it choosing instead to simply take the ransom.

The kidnap and murder of Charles Lindbergh Jr shares many similarities with the kidnap and murder of Thaddeus. Both were kidnapped while their parents dined downstairs and both were abducted by a ladder under their windows. Both their parents were tormented by a prolonged return of their children and both Charles Lindbergh Jr and Thaddeus were ultimately murdered.

In a flashback to 1978, Infantata kills the trespassing twin boys, Troy and Bryan. In the present time, Infantata, along with Tate, scares Leah to stop her from harassing Violet at school.[2]

Thaddeus Montgomery appears as human, sitting at the table.[3]

Infantata's origins are explained to Violet Harmon by Tate.[4]

Thaddeus' name is given and origins are elaborated on.[5]

A flashback to 1984, shows Tate was attacked by the Infantata as a child. Nora saved him and taught him how to make entities in the house disappear in case it ever happened again.[6]

Infantata scares the four students and attacks one of them.[7]

After Infantata is reanimated, he possesses some superhuman powers.

Ryan Murphy on the Infantata

Entertainment Weekly
I love the infantata flashback. Love that his name is Thaddeus. Why is he bloodthirsty? Is that to keep him alive?
Ryan Murphy
Yes. I think with any sort of horror show, you get what is the myth of that creature? And I think the approach we took to that is it’s sort of half-Frankenstein, half-Dracula. Left by himself in the house. Bloodthirsty. We’ve shown in other episodes where he’s been eating possums and bugs to sustain himself.

Entertainment Weekly
Is the Infantata still alive?
Ryan Murphy
He’s down there scavenging for bugs and eating possums until some other poor souls go down there. 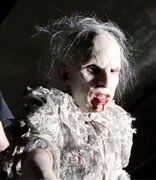 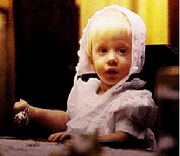 Thaddeus Montgomery as a baby.

Thaddeus Montgomery as a baby. 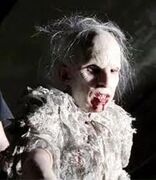