Iris is the manager of the Hotel Cortez. She is a character in Hotel portrayed by Kathy Bates.

In 1994, Iris follows her son Donovan to the Hotel Cortez, where she witnesses him receiving illegal drugs from Sally McKenna, a junkie. After bribing Liz Taylor at the check-in desk, she finds her son in Room 64, dead of a heroin overdose atop a mattress; Sally, all the while, calmly wafts into the halls to look out a nearby window. Despondent and enraged, Iris sneaks behind the drug dealer and shoves her through the window, sending her careening to her death many stories below. Shocked and devastated by her own actions and the death of her son, Iris returns to Room 64, presumably to say her final goodbyes to her only child. To her surprise, she is greeted by the presence of a stunning young woman sitting on the bed with Donovan, his head placed gently on her lap as she strokes his chiseled features with a strange black glove; one with sharp blades like talons at its fingertips. The otherworldly beauty comments, "Your boy has a jawline for days", as a speechless Iris looks on with melancholy and awe. At some point shortly after, Iris learns that this mysterious woman is Elizabeth, the Countess of the hotel and a vampire, who revives her son by afflicting him with her own ancient blood virus and taking him as her lover of the next 20 years.

In all the time since, Iris has remained the manager of the hotel to remain close to Donovan, who (re)lives there as the intimate companion of Elizabeth, with whom he is deeply in love. Although thankful for the Countess having saved Donovan's life, Iris also secretly resents her for stealing her son away and seldom having the chance to see him as a result. She has formed a close friendship with Liz Taylor, the hotel bartender, and continues an ongoing rivalry with Sally, who has haunted the hotel ever since her demise.[1]

She may have an eye for the tall, dark, and handsome but she's no sucker, and she has no trouble spotting a cop or a junkie. Nor does she have any qualms about serving the dark desires of the hotel's monstrous denizens; prepping and cleansing the blood of tourists for the Countess Elizabeth and her children to feed on, price gouging drug addicts before sending them to be raped and murdered, and feeding "that thing in Room 33". Anything to stay close to her son, Donovan.

She is a short and broad, practically dressed sixty-ish woman who wears very large corrective glasses. She spends much of her free time solving crossword puzzles. Iris's skin gradually becomes much paler and sickly in appearance after being afflicted with vampirism. This may be due to her improper feeding habits as a vampire, as Liz Taylor warns Iris that she must continuously drink human blood or face the negative repercussions of the disease; something Iris has only been seen doing twice, though it's possible there were more victims than anyone knows.

Iris has remained at the hotel for twenty years since the death (and apparent un-death) of Donovan, and at some point took over management duties. If she isn't found at the desk cracking a puzzle then she is likely nearby, ready to grumpily answer the ring of the desk bell.

She puts up Scandinavian tourists, Agnetha and Vendela, in a room in which they find something monstrous sewn within the mattress. Afterward, she ushers them to Room 64, ostensibly to await the police interview. However, it is merely a ruse to further terrorize them with Elizabeth's vampire children before taking them prisoners without pretense, and Iris is tasked with cleansing their systems with a blended diet of raw organs.

After an argument with Sally, she makes the mistake of leaving her in charge of the prisoners, and the mischievous ghost junkie lets Vendela out of her neon-festooned cage. Iris must then give chase to the girl through the hotel's lobby before running afoul of her displeased mistress, Elizabeth, who tasks her with the cleanup of the now-dead Swede.

At the arrival of Gabriel, an addict in need of a shooting gallery, Iris wastes no time in taking the advantage of quintupling the cost of a night's stay. She gives him a key to Room 64, which she previously told the tourists was never rented out.

When John Lowe arrived soon after, despite recognizing him as a cop (and apparently attractive "WOOF"), she doesn't deter him from investigating the very room to which she just sent Gabriel.

She is miffed by the arrival of a realtor who introduces Will Drake as the hotel's new owner, which leads Iris to fear eviction. Attempts to discuss these concerns with Donovan are met with rejection.[1]

Iris then fed Elizabeth's "children" so she can filter their blood and take it to a thirsty and indifferent Elizabeth who shuts the door to her face.

John Lowe then confronts her and tries to arrest her for kidnapping his daughter Scarlet (who escaped to the hotel without supervision or permission, to visit Holden). Iris then convinces him to take off the handcuffs saying that she will tell him "everything he needs to know." She buys drinks for them both and tells the story of the Hotel Cortez and its first owner James March, as well as his gruesome, bloody hobbies. This gave the hotel "A heart as black as the ace of spades." John rebuffs her and leaves not believing her story.

Iris is saddened by finding out that her son will no longer live at the hotel, and she suggests that she could find a nice apartment for them where they can live together. However, Donovan rejects her and tells her that he has never loved her. She is heartbroken and tries to prove that she was a loving mother, but he tells her to kill herself because she has nothing left to live for.[2]

After losing her son, she asks Sally to kill her through drug overdosage. The drugs fail to kill her and Sally suffocates her with a plastic bag. After talking to Liz Taylor, Donovan finds out that he will never find someone to love him as much as his mother and regrets the things he said to Iris. When coming to Sally's room, he finds his mother on the brink of death and heals her with his blood making her an afflicted.

Donovan and Iris bang on Ramona Royale's door at 4 am. Her butler, Graves, initially denies them entry. Ramona is enraged, but Donovan explains that Iris should be her new "inside man". Donovan also reminds Ramona that Elizabeth has taken everything from her, and Iris notes that Donovan has turned his mother. They agree that because Iris is beneath Elizabeth's notice, she is a perfect turncoat.

Liz questions Iris upon her return to the hotel, and offers the pallid woman some "hair of the dog". The astute Liz pours her some of Elizabeth's private stash of blood with a drop of triple sec. She reminds Iris that she will need to feed regularly. Liz is excited that the old woman has been reborn, but Iris is much more reluctant. She muses on an eternity of the invisibility of older women.

Iris leads Justin and his girlfriend to Room 36, which they balk at. Downstairs, Elizabeth and Tristan head out with vampire costumes for Halloween evening party. They pass on a message for Will that he's invited to Demi's for a party. Tristan and Elizabeth notice that Iris is nervous and smells different, which she writes off as Halloween stress. Justin wants a cheeseboard and grilled romaine from room service, which brings Iris to tears. They modify their order to pâté, and Liz is happy to oblige them with cat food on a silver platter. Liz and Iris begin bonding, and she mentions she's not homophobic. Liz responds that she's not gay.

Liz insists that Iris teaches the hipster couple some manners. The couple watches the news and continues complaining (except for the "decent" pate). Iris snaps and stabs the man and the woman with the cutlery and corkscrew, respectively, and takes a drink. Iris thanks Liz for the lesson in taking accountability, and they wheel the hipsters to the cadaver chute. The two finish off the wine the couple had ordered. Iris says it's ironic she never learned how to live until she'd died.[3]

Donovan and Ramona pay a visit to the hotel, passing by an apparently indifferent Iris. In the elevator, Ramona says she plans to kill the young towheads while Donovan heads to the penthouse. Ramona is unpleasantly surprised that the coffins are gone and confronts Iris about it (who is still high off the hipsters). Iris gives Ramona the keys to Room 33, her next stop.[4]

Iris walks with Elizabeth through the hallway and they stumble across a hallway with a wide hole in it and Iris sees Elizabeth very nervous.[5] Iris sees John walk in the hotel and like every other day, pretends it is his first day there until he says he has come before and she is relieved. John says that his only regret was killing Wren but Iris says that Sally told Wren to watch over you and that she is responsible. Iris advises John to leave but he asks for the key to Room 64 and she gives it to him. Iris is seen giving 3 porn stars their key to their room.[6]

Liz explains that her son wants to spend more time with her and Iris understands. Iris and Liz later barge in to kill Elizabeth but shoot Donovan on accident. After they shoot Donovan they take him outside so he is not a ghost and Donovan thanks Iris and then he dies. [8] Liz later gives Iris her son's ashes in a can and Iris thanks her. Iris then lays on her bed and pours her son's ashes on the bed and talks to him. Hazel comes in and Iris tells her to vacuum up her son. Iris then goes on the rooftop of the hotel staring out to the sky with her son's ashes on her. After that, Iris and Liz go find Ramona but they find all kinds of bodies and then they find Ramona and she thinks that they came to kill her. Ramona becomes hungry and they find Queenie and take her to her room, where Ramona chews on her. [9] Iris and Liz then give Ramona some clothes and she goes to kill Elizabeth. Iris and Liz then give a couple their key to their room. Iris and Liz then find their dead bodies on the floor and decide to call a meeting for the ghosts. Iris and Liz tell them to stop killing the guests, and March decides to go on their side but Sally and Will won't stop killing. Iris later gives Sally a phone and tells her how to use it. Iris brings Liz to meet Billie but Billie says Tristan doesn't want to talk. Billie then says that Donovan is talking about pancakes made by Iris and she begins to cry. Iris and Ramona begin to talk about Billie and how the Cortez is bad because of her and then John shows up and Iris is glad to see him and sets up a visit for him and Billie. In a flashback, Iris is shown reuniting with John, Holden, and Alex.[10]

Iris was turned by Donovan in 2015. She possesses all of the powers common to vampires. 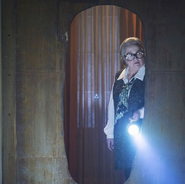 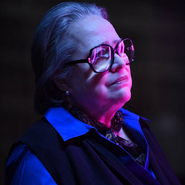