Adelaide Langdon
Jamie Brewer (born February 5, 1985) is an American actress. She is a member of the ensemble cast for AHS.

Jamie Brewer made her television debut on American Horror Story. Prior to her transition to acting on camera, she was a theatrical actress. She has not left the stage, however, and still continues her training through theater and through improvisation at 'The Groundlings Theatre and School'.

Jamie started taking theatre classes in 1999 at a 'College for Kids' class during her middle school years. Jamie has performed in dramas, musicals, comedy's, and improvisations during her theatre training at Dionysus Theatre. Jamie appeared/spoke in PSA's for the "Souper Bowl of Caring Houston Food Drive" in Houston, TX for 2 consecutive years which aired on NBC, ABC, and CBS.

Being an individual with Down Syndrome, Jamie has made it a point to be active in the Down Syndrome community. Jamie was the youngest to ever be elected President of the ARC of Fort Bend Chapter. From there, she was appointed to the State of Texas ARC Board, then elected to the Executive Board as Treasurer. Jamie was then asked to serve on the ARC Governmental Affairs Committee for the State of Texas. She spoke with Senators at the Texas State Capitol to persuade them to pass the law for Texas to abolish using the "R" word from state legislation, and regarding the needs of people with disabilities in Texas. Texas now uses "Intellectual Developmental Disability" in their legislation.

Brewer is involved with several non-profit organizations, including DSALA, DSiAM, BTAP, National Down Syndrome Congress, American Association of People with Disabilities of the United States, and Civitan International.[1]

She portrayed Adelaide, a mentally disabled but clever and sly young woman, in the first season of American Horror Story. In the third season, Coven, she plays Nan, a young enigmatic witch. In the fourth season, she appeared as a living ventriloquist doll named Marjorie. In Cult, she plays a member of Valerie Solanas' cult named Hedda. 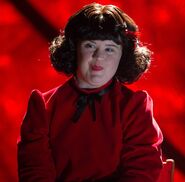 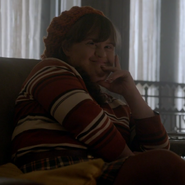