Karen is a mysterious local whose favorite pastimes include running, screaming and bleeding from her face[1]. She is a character in Double Feature portrayed by Sarah Paulson. Her behavior earned her the moniker "Tuberculosis Karen" amongst the residents of Provincetown.

Karen has short faded light pink hair and sports a dark grey beanie along with a very thick grey jacket, a grey below-the-knee skirt, and worn out light grey gloves. She has rotting teeth, pale lips, and thin, drawn-in brown eyebrows. In some scenes, she is seen carrying a white tote bag over her shoulder.

To many in Provincetown, Karen is just the local madwoman - diseased, mentally unstable, but harmless; only to be laughed at. Karen is treated with disgust or indifference, feelings too often directed at the homeless. Despite Karen's explosive personality and equally explosive use of language, she possesses a very strong sense of morality. In many ways, Karen is a victim. A victim of her own inner conflicts. A victim of the people of Provincetown, and more specifically a victim of Belle Noir. Noir has a hold over Karen, due to her wealth and power. She forces Karen to carry out her 'dirty work', which includes stealing babies, in exchange for protection and illegal drugs. Behind Karen's unstable and angry demeanour, is an immense sadness and frustration. Karen is also a very talented painter - a point unknown by those around her, except for Mickey. 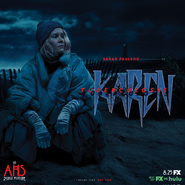