Sparse or underdeveloped article
This character article is a "stub" and needs to provide better or more complete text.
Please contribute to this article to expand it. Otherwise, it should be merged into another appropriate page.

Dr. Lark Feldman (born Leslie Feldman) is a mysterious tattoo artist and dentist in Provincetown whose clients are in for a teeth sharpening. She is a character in Double Feature portrayed by Billie Lourd.

Lark used to earn money for her studies by selling second-hand vintage clothing and accessories from the 80s as well as making tattoos which are her main passion in life. According to her, nowadays people from all over the world come to Provincetown to get a tattoo from her. However dentist profession, formerly imposed by parental opinion, became an additional source of income and helped her to better cope with transformation after taking the pill. It was Lark who invented and implemented modeling teeth technology for acquired blood ration, inspired by the characteristics of predatory animals.

She claims to have changed her name from Leslie to Lark, albeit without changing her documents, to be taken seriously among the tattoo community.

Lark is a beautiful young woman with a bubbly personality and is extremely affable, especially to her clients she works with. She stands at a petite stature, has a babydoll face, light brown shoulder length hair and dark eyes. She wears light makeup. Her wardrobe consists of Victorian-esque clothing and accessories. She also wears caps to mask her sharpened teeth.

When the cold-sick Singer is compelled to buy an inexpensive coat he comes to Lark's store, where he picks up a tweed coat with shoulders made of leather which later becomes the trademark of all Pale Creatures.

Two or three years after transformation, Belle Noir comes to the Lark's store seeking for completely new wardrobe. In the course of a short conversation they recognize each other as a Pale. Lark passingly notes that she has been on pills for a couple of months and also killed her ex-boyfriend and drank his blood. Belle is surprised and delighted with the convenience of Lark's idea with dental caps and agrees to become her client. After visiting the store Belle also gets a new set of vintage clothes.

After their first cooperative murder Belle Noir notices that Harry lacks the knack for devouring blood from the bodies. Then along with Austin they recommend Harry visit Lark's salon "Montezuma" at 465 Cafiero Street inside which there is an equipped dentist's office hidden in the basement. Lark greets Harry with an ironic remark but agrees to help with teeth sharpening. She also invites him to get a free tattoo in addition, however he refuses because of a promise to his wife. Lark explains to Harry that pills can unleash any talent, not just writing skills. She then takes his dental impression and sharpens teeth under nitrous oxide anesthesia. 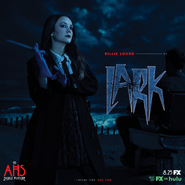