Leah is an older classmate and "frenemy" of Violet. She is a character in the first season (dubbed by fans "Murder House") portrayed by Shelby Young.

Leah picks on Violet during her first day at Westfield High, after she sees Violet smoking in a public area. According to one of Leah's friends, Leah's grandmother died of lung cancer, so smoking is a sensitive subject for her. She continues to pick on Violet until Violet invites her to Murder House, on the promise of selling her cocaine. Violet leads Leah into the basement where Tate and the Infantata scare Leah and injure her (deep gashes in her cheek) in the process. Leah tells her parents she was mugged and files a false police report. She confides in Violet after the incident, claiming she thinks she saw the Devil in the basement. They currently spend time together to deal with their supernatural experience.

Leah was originally a mean-spirited bully who continuously harassed Violet. However, after being scared and attacked in the basement of the Murder House by Tate Langdon, Leah was shown to have stopped bullying Violet at school, befriending her and confiding in her. After having witnessed pure evil in the Murder House, her hair started to turn white from shock, and she became depressed, apathetic and fearful, as she was haunted by her traumatic experience. While she originally despised smoking, and even harassed Violet for smoking, she took up the habit herself after being spooked in the Murder House.

Leah and Violet have a confrontation at school, which results in Violet spitting in Leah's face. Tate and the Infantata scares and injure Leah in the basement of the house.[1] A few days later, Violet checks up on Leah at an abandoned swimming pool/skate park. Leah asks Violet if she believes in the Devil. She also confesses that her hair is turning white and she filed a fake police report about the scratch marks on her face.[2]

Leah and Violet meet up in the abandoned swimming pool/skate park again. They discuss their anxiety and problems resulting from the horror of the basement. Leah has turned to the Bible, especially the apocalyptic "Book of Revelations", to make sense of her experience. She gives Violet sleeping pills with which Violet later attempts suicide.[3] 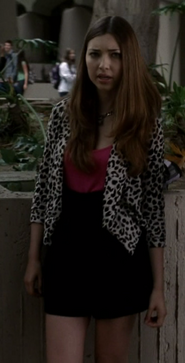