He joined the cast of American Horror Story in the role of Witches' Council member Quentin Fleming in the third season, Coven. He returned in the sixth season, Roanoke, as Ashley Gilbert, the actor who portrays medium Cricket Marlowe on "My Roanoke Nightmare", and as Courtney in the ninth season, 1984.

Leslie Jordan as the re-enacted Cricket Marlowe in (Roanoke) 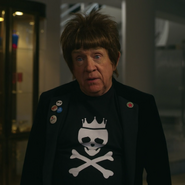