This article is about the wife of Larry Harvey. For the character from You're Going To Die In There, see Loraine Baxter.

Lorraine Harvey is the former wife of Larry Harvey. She is a character in the first season (dubbed by fans "Murder House") portrayed by Rebecca Wisocky. She is a former resident of the Murder House, where she lived with her husband and two daughters, Margaret and Angela.

Lorraine and her family lived in the Murder House in the early 1990s until her husband decided he wanted their neighbor Constance instead. He decided he was going to send Lorraine and the children away to her mother's residence. Lorraine then went upstairs and set the children's room on fire, killing herself and the two girls. Larry later moved Constance and her three remaining children back into the house.[1]

After death, Lorraine haunted the “Murder House” with her daughters, who have befriended the new ghost, Travis Wanderly. They appear just as they died; burned and singed. Larry is present as they appear, and when asked why it took a decade for him to finally see them, Lorraine explains Larry is finally ready to repent. Larry promises her that he will make Constance pay for what she did, but Lorraine points out that it was Larry who broke their marital vows and tore their family apart. She then disappears with Travis and the girls, leaving the heartbroken Larry behind.[2]

Moved by her words and ready to repent, Larry then takes the fall for Travis' murder and is incarcerated.[1]

Lorraine is a malevolent ghost. She was responsible for the sleep-walking of Ben Harmon and Miguel Ramos intending on burning them.[3]

Margaret Harvey is the daughter of Lorraine and Larry Harvey. Her sister is Angela. Angela and Margaret both died when their mother set their bedroom on fire, killing herself too. They have befriended Travis. Margaret appears in Open House and Afterbirth. Margaret and Angela appear burnt as they were when they died. Margaret is later spotted by Madison and Behold.

Angela Harvey is the daughter of Lorraine and Larry Harvey. Her sister is Margaret. Angela and Margaret both died when their mother set their bedroom on fire, killing herself too. They have befriended Travis. Angela appears alongside her mother and sister in Open House and Afterbirth. Margaret and Angela appear burnt as they were when they died. Angela is later spotted by Madison and Behold. 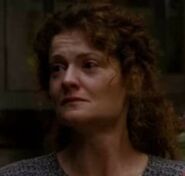 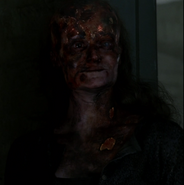