Luke Maxcy is a security guard hired by Vivien Harmon to protect her home. He is a character in the first season (dubbed by fans "Murder House") portrayed by Morris Chestnut.

Luke Maxcy represents Heirloom Security, a company Vivien Harmon hires to protect her family home after it is invaded. He is the company's install technician and security officer. He and Vivien have a mutual attraction for one another which causes some tension with Ben.

Luke is a handsome African-American man with a goatee and shaved head. He has the physique necessary to be a capable security guard.

He is steadfast in his duties and compassionate to the needs of his clients.

Luke details the features of the security system to Vivien and expresses the assumption that she would be quick to use the panic button after the trauma she had just experienced. He explains that he would understand and be in the area anyway if she needed assistance. Luke comes to the residence in response to the alarm being triggered by Vivien. He is next called upon to arrest Hayden McClaine (her ghost, anyway). As the sun rises and Halloween ends, Hayden disappears from the back seat of his car leaving Luke perplexed.[1]

When Ben becomes convinced that Vivien is losing her mind, Luke believes this to be a ruse for Ben to gain custody of the kids and full ownership of the house. However, Vivien begins attacking Ben under the impression that he is Rubber Man and Luke is forced to take her away.

When Ben learns that one of Vivien's twins is not his and Hayden convinces him that Luke and Vivien have been engaging in a secret affair behind his back, Ben confronts Luke about this but Luke reveals he is incapable of having children.[2] 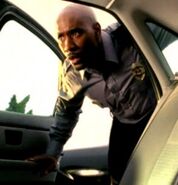