Sally Keffler
Mary Meghan "Mare" Winningham (born May 16, 1959) is an actress and a songwriter who has appeared in over 100 movies and TV shows.

Winningham has been acting since her teens with episodic work in TV shows including James at 16, Police Woman, Starsky and Hutch, and Family. However, her early career was primarily spent in made for TV movies and mini-series including Studs Lonigan, The Thorn Birds, Amber Waves, and the titular role in Helen Keller: The Miracle Continues. In 1985 she became a peripheral member of the Brat Pack with her role in St. Elmo's Fire and her film work continued with Nobody's Fool, Made in Heaven, Turner & Hooch, and Wyatt Earp. She has remained a perennial in made-for-television dramas and in 1998 joined the cast of ER with a recurring role as Dr. Amanda Lee. In 2003 she starred in the series' The Brotherhood of Poland, New Hampshire, Clubhouse, Grey's Anatomy as Susan Grey, Torchwood as Ellis Hartley Monroe, and Under the Dome as Agatha Seagrave. In 2014 she co-starred in the steamy Showtime drama The Affair.

Her appearances in American Horror Story include Alicia Spencer in Coven, Rita Gayheart in Freak Show, Hazel Evers in Hotel, and Sally Keffler in Cult. 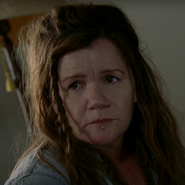 Retrieved from "https://americanhorrorstory.fandom.com/wiki/Mare_Winningham?oldid=150312"
Community content is available under CC-BY-SA unless otherwise noted.