Consuelos was born in Zaragoza, Spain, to an Italian mother and a Mexican father.[4][5] He is the youngest of three children: he has one brother, a doctor, and one sister, a lawyer. Consuelos was raised in Italy and the United States since childhood, growing up in Lebanon, Illinois, and later in Brandon, Florida.

In 1996, Consuelos married Kelly Ripa, his co-star on All My Children. 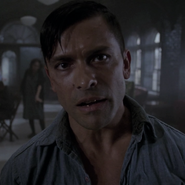 Mark Consuelos as Spivey (Asylum)
Add a photo to this gallery
Retrieved from "https://americanhorrorstory.fandom.com/wiki/Mark_Consuelos?oldid=150731"
Community content is available under CC-BY-SA unless otherwise noted.