Alfonso Gomez-Rejon
"Massacres and Matinees" is the second episode of Freak Show. It premiered October 15, 2014. [1]

A citywide curfew threatens to shut down the freak show. A strong man from Ethel's troubled past arrives at camp. Gloria arranges a terrifying play date for Dandy. The Tattler Twins reveal a talent that could knock Elsa from the spotlight.[2]

At the carnival, the carnies do laundry and eat while listening to the radio. Jimmy adjusts the dial for local news of the murders. A police detective is reported missing and the police arrive at Elsa's carnival to ask them questions about the disappearance. Jimmy quickly confirms with Paul that the body has been dealt with. Jimmy directs the police to Elsa's tent. Elsa tells the police officers that enforcing a curfew will negatively impact her business. The twins arrive and Dot corroborates the story that their mother's killing matches the accounts of the other murders. Not mollified, the officers leave.

In a toy store, a clerk calls after the owner. Some items are out of place. A toy windup robot tracks blood from the next room while Twisty lurks unmoving against a wall. The clerk follows the blood trail and looks up to find his employer's severed head resting on a shelf. Before he can react, the killer clown's shears penetrate his throat from behind.

A record plays during dinner as Suzi skates her way down the table to a sullen Jimmy. He snaps at them and storms out. Jimmy later apologizes for his behavior to Eve and Paul as they disinter the dismembered body of the officer with intent to burn the body parts. They muse that the "freaks" are no different from normal folk. Eve finds the officer's badge and gives it to Jimmy.

In the elegant Mott mansion, Gloria and Dandy have a sullen dinner as well. Dandy flicks his fork to offset his boredom. Dandy refuses the escargot that he ordered. He fills his glass "nipple bottle" with cognac. Gloria insists that a female companion would do him good, but Dandy insists that all he wants is to be an actor. Gloria won't have it and he runs off in a huff. The cook approaches Gloria and mentions that she found the remains of the neighbor's cat. She implies that Dandy is the culprit, but Gloria does not believe it.

Ethel observes Dell arriving with a trailer bearing Desiree in tow. Desiree is unimpressed with the place. She and Dell have been with a Chicago troupe for the last six years but left after Dell killed a young homosexual man who hoped to "change his stripes" by having sex with a hermaphrodite. Desiree reveals that in addition to her three breasts, she has full female genitalia and a penis. Dell asks that they be able to join the act. Elsa asks to read Dell's palms and audition his bark.

Gloria drives leisurely, encountering a walking Twisty on the roadside. She pulls alongside, asking if he does private parties for children. She will pay him handsomely to amuse Dandy.

Jimmy and Dandy talk. Dandy says that he's not infatuated with the twins, but he wants to join the troupe. Jimmy says that he's not the first to want to run away from home and "join the circus," but that without a deformity, he won't do well. Dandy insists that he will prove he's a freak. Jimmy tells him to count his blessings that he is normal. Dandy retreats to the car where he beats his head against the steering wheel.

Gloria has a surprise for him when he returns, a "new friend." Dandy examines Twisty curiously.

Desiree emerges from the trailer, observed by Ethel. Ethel takes the opportunity to visit Dell. She tells him that he is not welcome there. Dell tried to kill Jimmy when he was a baby, but Ethel drove him away. Now Dell claims that Elsa has deputized him as her new second in command.

On the main stage, Desiree plays "When I'm Calling You" and Bette proves that she can't sing. Elsa insists that it doesn't matter what their talent is, so long as they have two heads. Jimmy suggests that Dot give it a try. Dot shyly starts off "Dream a Little Dream of Me" and is significantly better than Bette. Dell says that it will be nice for the new matinee to get around the curfew. Elsa thinks that the evening is the only time for a freak show, adding to the mystique of the show, and asserts her authority. Dell insists that "No lady is the boss of me." He nearly strikes Jimmy before running off to town.

Dandy tries to entertain Twisty with a marionette show. Twisty is not amused, though Dandy wants Twisty to take a turn amusing him. Dandy more closely observes Twisty and says that the clown will have to earn his keep to stay. Dandy rummages through a nearby toy box, which interests Twisty.  While distracted, Dandy begins investigating Twisty's sack, finding something shocking. At the same time, Twisty hits Dandy's head, knocking him unconscious, then runs off.

Jimmy brings his carny friends to his friend the waitress at the diner, wanting to be served. Most take seats at the diner bar. Some disgusted patrons complain or leave. Paul starts to eat from a plate that another patron left behind, but the waitress will not let him keep it. Dell angrily hauls Jimmy out and beats him in the street, upset that the troupe has given a "free show" to the diners.

The clown's captives try to rip their way to freedom when Twisty returns to the bus. Twisty enters the coop and sits with the children, saying nothing. He pulls the wind-up robot from his pocket and sets it walking towards the boy. Still confused, they do not laugh. Defeated, Twisty pulls a severed head from his bag instead. The girl assaults him with a loose board and they try to escape, dislodging Twisty's mask. Below, his lower jaw is missing. As she runs away, she collides with Dandy and begs him to help her, but he carries her back into the bus.

Back at the grounds, Jimmy has a black eye. He calls on Elsa. Dell is posting his matinee posters, but Elsa has reversed her position and is letting him try. She thinks it's good to have Dell around. Jimmy reveals that he disposed of the detective, showing her the badge as proof. Elsa is impressed.

Later that evening, Dell starts the show with Meep biting the head off a chicken. This act is followed by Dot singing (anachronistically) Fiona Apple's "Criminal" while a "mosh pit" forms amid the front row. Bette sings backup vocals and the elated crowd cheers. Elsa sees her dreams of stardom crushed as they receive more applause than her wildest dreams for herself.

The police return to search the camp. They received an anonymous tip leading them to Dell. Jimmy had stashed the badge in Dell's trailer, but Dell was suspicious and found the badge first, moving it under Meep's bedroll. They take Meep away and shove him into a cell with a bunch of hardened criminals. The inmates threaten to rip Meep's fingers off one-by-one, causing the small man to cower in the corner and scream.

During the night, Elsa visits Bette, while Dot sleeps.  Belle is upset that she could not be the star her sister is. Elsa commiserates with her and tells her that the fickle crowd will see her as the star soon. Elsa sows discord between the two, saying that Bette mustn't allow Dot to steal Bette's stardom. She slips her a knife under her pillow.

A drunken Jimmy is awoken by Ethel. Jimmy is distraught at what happened to Meep and blaming himself. Ethel assumes the police roughed Jimmy up. Ethel says that Dell is bad news and to stay away from him. Jimmy intends to confess to free Meep, confusing Ethel. Moments after he emerges from the tent, a truck dumps a bag containing Meep's corpse and speeds off. As Jimmy wails, the others crowd around him in comfort. 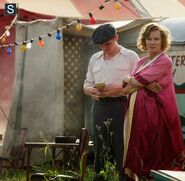 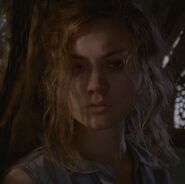 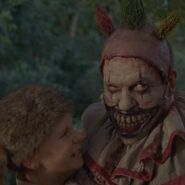 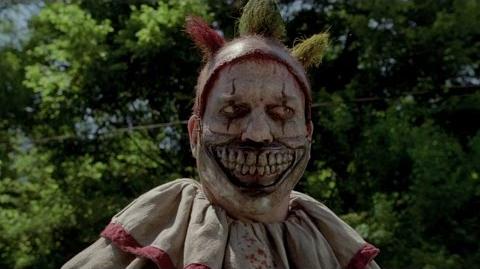