Gabriel
Max Greenfield (born September 4, 1980) is an American actor who joined the cast in the fifth season of AHS: Hotel as Gabriel. Greenfield's first big break was on the MTV series Undressed. He appeared in recurring roles in Veronica Mars and Ugly Betty, and co-starred in the WB series Modern Men. He is a co-star in the Fox sitcom New Girl, for which he received Emmy, Critics' Choice Television, and Golden Globe awards nominations for his role as Schmidt.

Max Greenfield was born on September 4, 1980 in Dobbs Ferry, New York, USA. He has been married to Tess Sanchez since 2008. They have two children together. 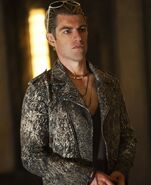 Max Greenfield as Gabriel (Hotel)
Add a photo to this gallery

Retrieved from "https://americanhorrorstory.fandom.com/wiki/Max_Greenfield?oldid=149240"
Community content is available under CC-BY-SA unless otherwise noted.